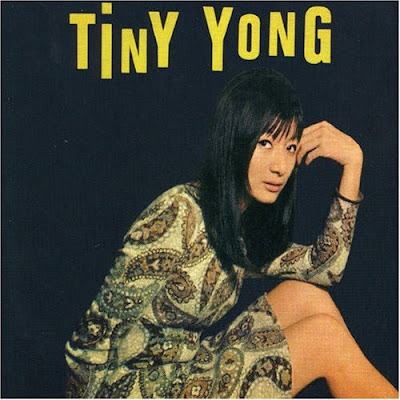 Сambodian-born singer Tiny Yong moved to France as a teenager. She later signed to Henri Salvador’s record label, where her great choice of material and sweet vocals delighted ye-ye fans.
She was born Thien Juong Ton Hu Thi on 8 February 1944 in Phnom Penh, Cambodia. (The spelling of her name is sometimes given as Thien Huong Ton Nu Thi.) Her family were Vietnamese but had settled in Cambodia at the time of her birth.
They moved back to their homeland, but when relations between North and South Vietnam became increasingly tense in the late 1950s, they upped and moved to France. Her father resumed his medical career there, while her mother opened a Vietnamese restaurant.
Young Thien, however, had her sights set on becoming a performer. She made her first public appearance in cabaret at the restaurant La table du mandarin, but also acted in local theatre productions.
Her television debut came in 1961, with an appearance as Tai-Au in the film Marco Polo, and she followed it shortly afterwards in Le jeu de la verite. In both films, credits gave her name as Thien-Huong.
n 1962 she duetted with Jean Philippe on Parfum celeste and sang on the soundtrack of the film L’oiseau de paradis. 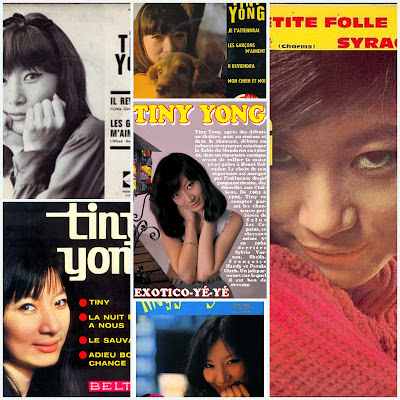 She was spotted by Henri Salvador in 1963. The French star was eager to add more females to the roster of his Disques Salvador label, and he signed her up straight away. (Audrey – also known as Audrey Arno – joined the label the same year too.)
enamed Tiny Yong, the singer cut her first EP that year. It led with En reve, a version of Roy Orbison’s In dreams, but Tais-toi petite folle – a cover of the Shirelles’ Foolish little girl – is generally regarded as the highlight of the release. Salvador himself helped write both of the other tracks on the EP. With frequent spins on the hip Salut les copains radio programme, the release became a chart hit in France.
The Gerry Goffin and Carole King penned I can’t stay mad at you (a top ten US hit for Skeeter Davis) was rewritten as Je ne veux plus t’aimer for Tiny’s second EP, released later the same year. 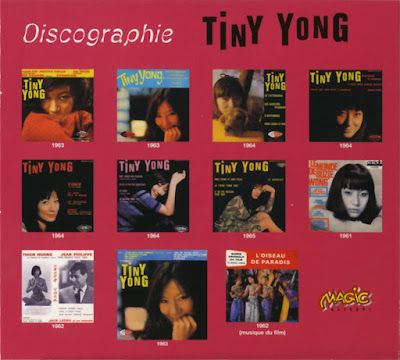 Salvador stepped in to help write the lead track for her third EP, Je t’attendrai, issued in 1964. The release is also notable for the inclusion of Les garcons m’aiment, a version of When the boy’s happy (the girl’s happy too) by the Four Pennies, a name used briefly by US girl group the Chiffons.
Tiny kept up her public profile playing a Chinese woman in the film Les parias de la gloire, which debuted in French cinemas in April 1964.
Like Audrey, Tiny’s subsequent releases were issued through the Rigolo label. The first was Histoire
d’amour, a version of the Raindrops’ Book of love. Interestingly, the remaining three songs on the EP had again all been co-written by Salvador.
The charming Tiny – a song that told her life story, or at least a version of it – became the lead track on her final EP of 1964. The release also included Le sauvage, a cover of the obscure He’s no good, penned for British girl group the Baker Twins by Tony Hatch, the man behind the careers of Petula Clark, Jackie Trent and others.
The Beatles’ songbook was raided for Tiny’s first release of 1965. The Liverpudlian lads’ Eight days a week became Huit jours par semaine, and the EP also included Le tigre, a version of Sue Thompson’s Paper tiger, plus the highly regarded original Tu es le roi des menteurs, on which Salvador duetted.
That year Tiny also took part in Rose d’or contest, appearing alongside Alice Dona and Evy, amongst others. She performed Avant, but it didn’t win and wasn’t included in her final release, Mon futur et mon passe. Salvador’s influence is clearly evident on all four tracks on this EP and the result is less ye-ye, more lounge.
With her recording career over, Tiny continued acting, cropping up occasionally on French TV screens, including in 1970s crime series Allo police, before disappearing from the public eye.
Tracklist 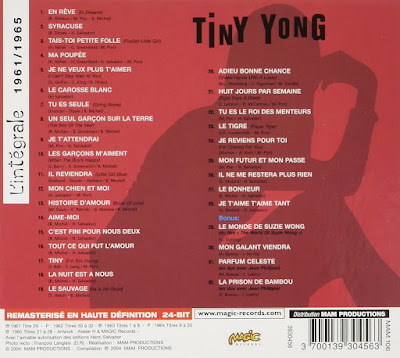