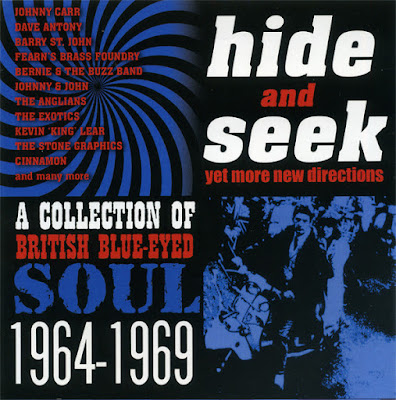 Hide and Seek: British Blue Eyed Soul 1964-1969 collects 20 tracks from an
overlooked aspect of the '60s U.K. rock scene, namely the blue-eyed, mod soul
sound that lurked behind the scenes between 1964-1969. Some well-reissued bands
like the Action or the Small Faces dipped their toe into similarly soulful waters,
but the bands here for the most part go all out and draft in big horn sections,
chunky Hammond organs, backing singers and a feel pitched somewhere between a
Northern soul All-Nighter, a sweaty night at the cabaret, and the bottom half
of a package tour. In other words, you're looking at pure gold here. Well,
almost pure. As with most collections the track list has some clear winners
(Barry St. John's devastatingly hot "Turn on Your Light" that out-Lulu's Lulu
by a mile, Jon & Jeannie's strutting "We Got Lovin,'" Kevin "King" Lears' wild,
indescribable take on "Cry Me a River" (think Bobby Darin on peyote and you're
halfway there), the funky antics of Johnny & John on "Bumper to Bumper," the
chunky bubblegum soul of Bernie & the Buzz Band on "Don't Knock It.") Hide and
Seek: British Blue Eyed Soul 1964-1969 is a vital piece of crate digging
scholarship that fills a gap most U.K. music geeks didn't even know was worth
investigating 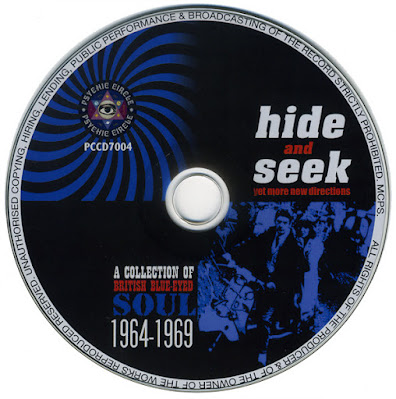 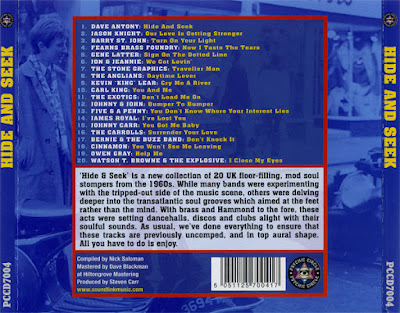