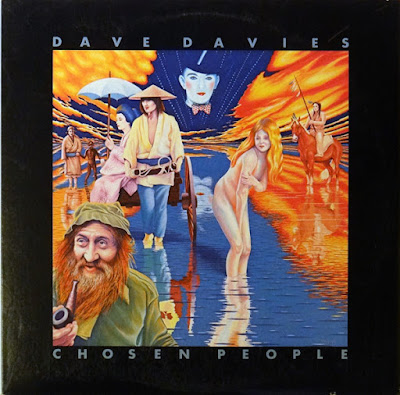 Dave Davies, brother of Ray Davies, was one of the founding members of The Kinks in 1963. He has been the lead guitarist and occasional vocalist till the band stopped playing in 1996. During the years he has also done some solo projects: some singles in the sixties and a couple of albums in the beginning of the eighties. After The Kinks quit, Dave picked up his solo career again and has been touring and releasing music ever since. 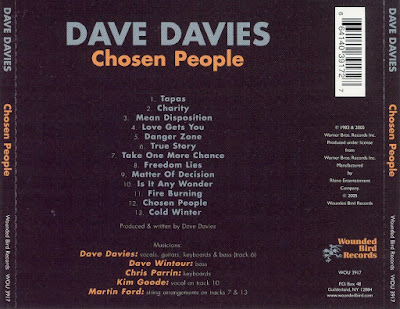 Chosen People is Dave Davies' third solo album, and by this release he seemed to have gotten it right. Gone is the big stadium rock sound and present is Davies' wonderful voice and melodic songs. Although this is not the album fans of "Death of a Clown" were hoping for, it is a much stronger album than 1981's Glamour and 1980's AFL1-3603. Davies still rocks out, but there are more ballads present. Also, the lyrics seem to have much more thought in them and present interesting stories and thoughts. Perhaps it is due to the use of a band and a co-producer on this album (the other two releases were primarily just Davies, although drummer Robert Henrit did drum on Glamour). The songs here are much more melodic and Davies finally displays that wonderful voice that was buried on the other two releases. Yes, his trademark guitar is found throughout, but so are beautiful, heartbreaking songs, such as "Is It Any Wonder." Dave Davies has spent much of his career in the shadow of his brother and the band the Kinks. As good as this album is, it does not remove that shadow. This proved to be Davies' only release on the Warner Brothers label. Fans of the Kinks and '80s hard rock should have this album in their collection.