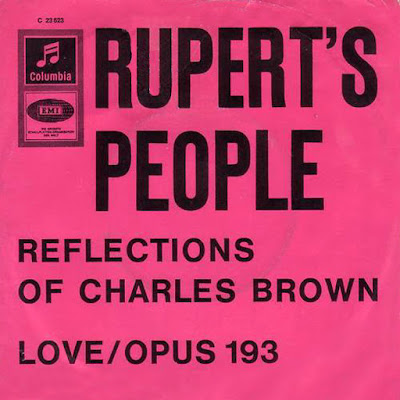 For a band that released just three singles and had no significant commercial success, the story of Rupert's People is enormously complicated. The band went through three separate lineups, and none of the musicians who were in the iteration that was by far the longest-lasting and most visible played on their most celebrated single. What ultimately matters most, though, are the records they left behind. And the Rupert's People releases contained some good period late-'60s British psychedelic pop, particularly the one record that psychedelic collectors tend to be familiar with, "Reflections of Charles Brown."

The whole messy saga starts with the even more obscure band Sweet Feeling, who released just one single in 1967, "All So Long Ago"/"Charles Brown." The A-side was a passable 1967 Kinks-style tune, very reminiscent of the snapshot-of-British life-styled tunes Ray Davies was writing at the time. It was outshone by its B-side, "Charles Brown," which was British psychedelia at its most disquieting, telling the story of an average British family man with a most eerie melody and some of the strangest backwards effects to be heard on any circa-1967 rock record.

Sweet Feeling's manager, Howard Conder (a drummer who had played in the Barron Knights, the Moontrekkers, and sessions for producer Joe Meek), asked Sweet Feeling songwriter/guitarist Rod Lynton to rework "Charles Brown" with a different melody and lyrics. The result, now titled "Reflections of Charles Brown," was quite different than its prototype, with a melody based on Bach's "Air on a G String" and a far more gentle, uplifting ambience. Conder then recruited a band, Les Fleur de Lys, who had released some respectable mod rock records of their own without a hit, to record the song in an arrangement reminiscent of early Procol Harum. Les Fleur de Lys also recorded a B-side, "Hold On," but decided not to work with Conder after the tracks were done. The single was released anyway, and has become regarded by collectors as one of the better little-known British psychedelic 45s.

Conder's original idea was to have Sweet Feeling change their name to Rupert's People so that there was a band to promote the single. Sweet Feeling declined, so a Rupert's People lineup was formed around singer Chris Andrews (not the person of the same name who had several pop hits in the U.K. in the mid-'60s), who had sung on the "Reflections of Charles Brown" 45. Ex-Merseybeats drummer Johnny Banks, and Tony Dangerfield (who'd recorded on his own and was in Screaming Lord Sutch & the Savages), were also in this group, which lasted only briefly and didn't record anything that was released.

Conder then went back to Sweet Feeling and again proposed that the band change their name to Rupert's People. This time, they accepted, and the renamed group put out a couple more singles in 1967-1968. Though the other Rupert's People singles weren't as memorable as "Reflections of Charles Brown," they did contain some fair British pop-mod-psych. That was particularly the case on "A Prologue to a Magic World," which like many of the time's U.K. psychedelic singles built a whimsical fairytale-like atmosphere.

Rupert's People continued playing live until the end of the 1960s, by which time they were handled by future Police manager and record mogul Miles Copeland. At the beginning of the 1970s, they changed their name to Stonefeather, with future Police drummer Stewart Copeland replacing Steve Brendell on drums. Lynton then quit, and that was the end of the line, though members of Rupert's People, from various incarnations, continued to play roles in the music business. Copeland joined the Police, of course, but also Brendell worked at John Lennon and Yoko Ono's film company, and played on Lennon's Imagine album; Lynton also played on Imagine. Keyboardist John Tout replaced John Hawken in Renaissance. 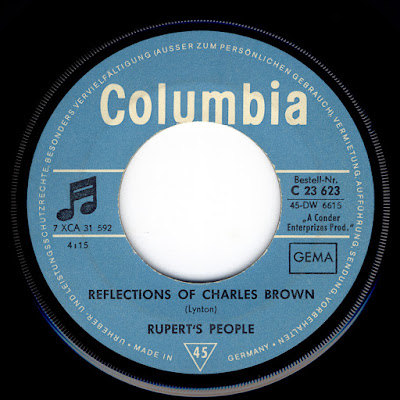