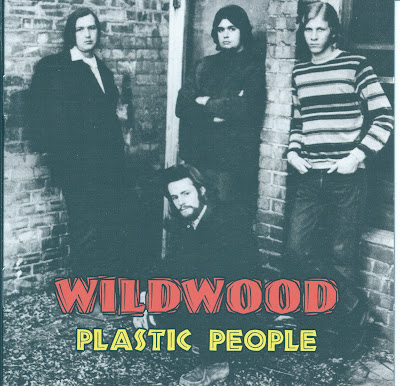 "Don't be fooled by the name -- with a moniker like WILDWOOD, you might expect pastoral lite-rock from some self-absorbed hippies.

Instead, this hard rocking quartet of the same name parlayed some of the toughest, most malevolent late 60s sounds heard on tape, and their spectacular legacy is celebrated upon the deluxe 2 CD anthology Plastic People.

WILDWOOD hailed from the tough blue-collar environs of Stockton in California's Central Valley -- and they walked it like they talked it. In the late 60s Bay Area mellow milieu, WILDWOOD was the exception -- dark and vaguely sinister in both look and style, they melded the f**k you attitude of the garage era with a soulful R&B streak and some enviable hard rock chops.

Nevertheless, the outfit ruled the region between the years of 1968 and 1972, promoting their own shows and recording a slew of original material at the old Fantasy warehouse in San Francisco.

Two sought-after 45s -- 'Plastic People' and 'Free Ride' -- were all that escaped of WILDWOOD for public consumption at the time, but Frantic has gathered up the rest of the sessions to present the rest of their outstanding, power-packed repertoire.

Featuring the soulful vocals of bass player Frank Colli, the WILDWOOD sound is reminiscent of acts as varied as The Doors, Music Machine and Steppenwolf, but with a powerful, unique backbone that is very much their own.

Joined by organist Mark Ross, guitarist John Turner, and drummer Tim Mora, Colli was a legitimate bad-ass whose expressive personality delivers WILDWOOD in a class of their own.

In addition to the all the surviving masters by the group, we also include the legendary two-sided early 1967 single by precursor combo The Mal-Ts, and a brace of ear-opening demos and studio sessions by the band's iconoclastic lyricist, Chalker -- rumored at one time to have personal knowledge of the Zodiac Killer!

Independent to the end, WILDWOOD did their own thing, and their story is a good one, detailed in an extensive liner note by Grammy-nominated 60s expert Alec Palao.

The usual deluxe booklet is loaded with eye-popping visuals in the inimitable Frantic Records manner. Any fan of late 60s psychedelic hard rock will want a copy of Plastic People -- and they won't be disappointed." ~  Nelwizard 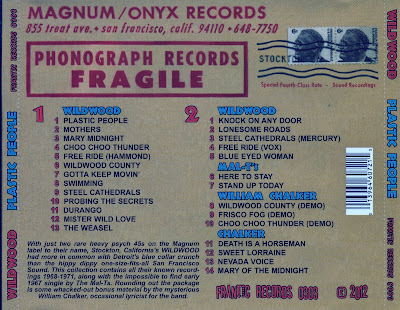