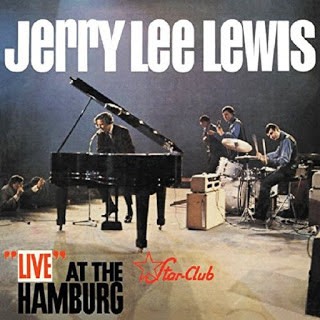 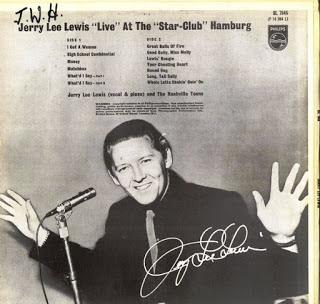 Live at the Star Club is a 1964 live album by rock and roll pianist Jerry Lee Lewis and The Nashville Teens. The album was recorded at the Star-Club in Hamburg, Germany on April 5, 1964. It is regarded by many music journalists as one of the wildest and greatest rock and roll concert albums ever. The album appears in the book 1001 Albums You Must Hear Before You Die.
Live at the Star Club was produced by Siggi Loch, who was head of the jazz department at Philips Records. In Joe Bonomo's book Lost And Found, Loch states that "...I realized that there were all of these young, mainly British, bands who were playing Chuck Berry and other white American rock & rollers, their big heroes...And I went to the owner and made a proposal to start recording bands at the Star-Club, which I did." According to Loch the recording setup was uncomplicated, with microphones placed as close to the instruments as possible with a stereo mike placed in the audience to capture the ambience. The results were sonically astonishing, with Bonomo observing that "Detractors complain of the album's crashing noisiness, the lack of subtlety with which Jerry Lee revisits the songs, the fact that the piano is mixed too loudly, but what is certain is that Siggi Loch on this spring evening captured something brutally honest about the Killer, about the primal and timeless center of the very best rock & roll..."

Sixteen songs were recorded over two sets, the first set comprising "Down The Line," "You Win Again," "High School Confidential," "Your Cheatin' Heart," "Great Balls of Fire," "What'd I Say (Parts 1 & 2), and "Mean Woman Blues." The second set featured "Good Golly Miss Molly," "Matchbox," "Money," "Whole Lotta Shakin' Goin' On," "Lewis Boogie," "Hound Dog," "Long Tall Sally" and "I'm On Fire."  "Down The Line," omitted on the original LP due to a sound fault at the beginning, was released on French Mercury single Les Rois du Rock, Vol. 8 : Jerry Lee Lewis and included on later CD and LP releases of Bear Family Records. The tapes for "You Win Again" and "I'm On Fire" are believed to have been lost.

For decades the album was available only in Europe due to legal constraints. In 2014, Lewis told biographer Rick Bragg "Oh, man, that was a big monster record" but that the record company "never paid me a penny." Speaking to Patrick Doyle of Rolling Stone in 2014, Lewis remained proud that he "stuck with rock & roll when the rest of them didn't, I kept the ball rollin' with that."