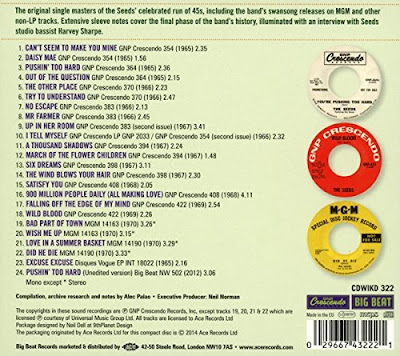 The Seeds were an American rock band formed in Los Angeles, California in 1965. The group became known for psychedelic rock music and is considered a prototype for garage punk rock bands.The Seeds were formed in 1965 when lead singer Sky Saxon responded to an advertisement. Saxon, who had relocated to Los Angeles from Salt Lake City, had recorded a string of 45s under the name Richie Marsh. The band secured regular gigs at the LA club Bido Lito's and quickly gained a local reputation for high energy live performances.

Keyboardist Daryl Hooper was a major factor in the Seeds' sound; the band was one of the first to utilize keyboard bass. Guitarists Jan Savage and Jeremy Levine along with drummer Rick Andridge completed the original quintet, but Levine left shortly after the first recording sessions for personal reasons. Although Sky Saxon was usually credited as bass player, he did not play bass on any of the Seeds' recordings. This was handled by session musicians, usually Harvey Sharpe. On stage, keyboardist Daryl Hooper would perform the bass parts via a separate bass keyboard, in the same manner as Ray Manzarek later did with The Doors.

The Seeds' first single, "Can't Seem to Make You Mine", was a regional hit in Southern California in 1965. The song was also played regularly on AM rock stations in northern California (and probably elsewhere), where it was well received by listeners, and eventually went on to become, and is considered today, a 60s cult classic song. The band had a national Top 40 hit, "Pushin' Too Hard", in 1966 and performed the song on national television. Three subsequent singles, "Mr. Farmer" (also 1966), a re-release of "Can't Seem To Make You Mine" (1967), and "A Thousand Shadows" (1967) achieved more modest success, although all were most popular in southern California. Musically uncomplicated with a flair for simple melodic hooks and dominated by Saxon's unorthodox vocal delivery, their first two albums, The Seeds and A Web of Sound, are today considered classics of 1960s garage music.

A major turning point for the Seeds came in 1967. The band's self-produced third album Future presented a grander psychedelic artistic statement and thrust the group forward as torchbearers during perhaps the most creative and experimental time in American pop culture and music history. The more expansive musical style with accompanying orchestration - presented with a gatefold sleeve featuring ornate flower-themed artwork by painter Sassin - was a departure from the rawer tone of the band's previous hits, but nevertheless received acclaim from fans and critics as a notable work of flower power psychedelia. It remains a genre curiosity piece today and is regarded as a pioneering effort in full-blown psychedelic rock. Iggy Pop, Smashing Pumpkins, Animal Collective and members of the Beach Boys have all sourced the band, mentioning this album and previous ones as genre classics.

The release of Future in mid-1967 generally marked the commercial peak of the Seeds’ career, coinciding with a major national hit, raucous concerts, numerous live TV performances, as well as prominent guest appearances on the NBC sitcom The Mothers-in-Law and in the hippie/counterculture-themed cult film Psych-Out. The Seeds also recorded another album devoted specifically to the blues (with liner notes by Muddy Waters). A Full Spoon of Seedy Blues, bearing the artist moniker Sky Saxon Blues Band, was released in November 1967.

In May 1968 the band released their final LP for GNP Crescendo Records, Raw & Alive: The Seeds in Concert at Merlin's Music Box, which musically revisited their more aggressive garage rock roots. However, the album and its accompanying single "Satisfy You" both failed to chart nationally. The band was renamed "Sky Saxon and the Seeds" in 1968, by which point Bob Norsoph (guitar) and Don Boomer (drums) had replaced Savage and Andridge respectively. Saxon continued to use the name "The Seeds", utilizing various backup musicians, at least through 1972. The last major-label records of new material by The Seeds —two non-charting singles on MGM records — were released in 1970.

After the dissolution of the Seeds, Sky Saxon joined the Yahowha religious group, inspired by their leader Father Yod. Although a member of the Source Family for several years, Saxon did not participate in any of the albums released by Yahowha 13 in the mid 1970s. He does appear on the "Golden Sunrise" album by Fire Water Air, which was a Yahowha 13 offshoot, and later recorded the "Yod Ship Suite" album in memory of the deceased Father Yod. In the 1970s, Saxon also released the solo LPs "Lovers Cosmic Voyage" (credited to Sunlight) and "Live At The Orpheum" credited to Sunlight Rainbow. In the 1980s, Saxon collaborated with several bands—including Redd Kross and The Chesterfield Kings—before reforming the original Seeds in 1989 to headline "The Summer of Love Tour", along with Big Brother and the Holding Company, Arthur Lee and Love, The Music Machine, and The Strawberry Alarm Clock.

The Seeds remained dormant again until 2003, when Saxon reformed them with original guitarist Jan Savage and newcomers Rik Collins on bass, Mark Bellgraph on guitar, and Dave Klein on keyboards. This new version of the Seeds went through several incarnations, with Savage departing midway through their 2003 European tour due to his health. Saxon remained the only original member of the Seeds, which continued to tour Europe and the United States. Saxon died on June 25, 2009 of heart and renal failure. The Seeds' original drummer Rick Andridge died in 2011.