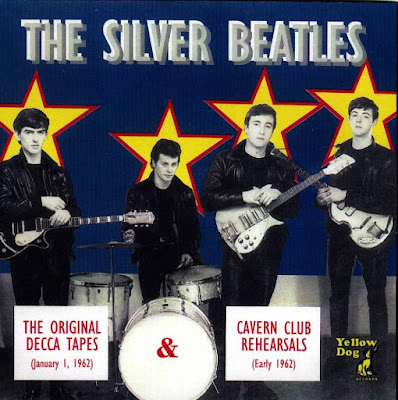 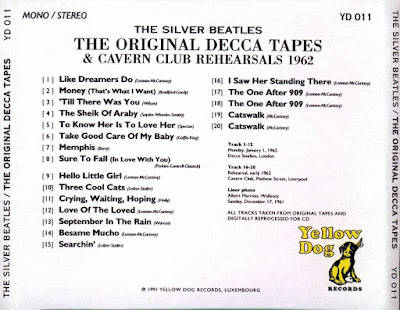 The Decca audition material, with the exception of three tracks had been around for a while on the gray market, but
as the result of legal action by Apple, they reverted back to bootleg status and Yellow Dog managed to get the first
release on CD sourced from a tape source.
Unfortunately the speed was off and this was latter corrected on The Early Years, 1962, Decca Tapes Revised,
Right Speed , being Disc One of their Ultimate Collection Volume One Box set and shortly after on a stand
alone disc The Decca Tapes in 1995 .

The Cavern Rehearsal Tape, had appeared several times at this point and may have been of marginal better quality
, however with the release of the Ultimate Collection Volume 1 , there was a clear upgrade, so the dispute as to
what was the core source in 1991 is now some what mute.
You may have noticed the limited number of FAKES, I can only put this down to these been released after the 1993
speed corrected upgrades. The one fake is the Common 1993 Kiss The Stone Digipak fake which had alternate
mastering and a poor picture CD.
The Silver Beatles
Original Decca Tapes and Cavern Club Rehearsals 1962