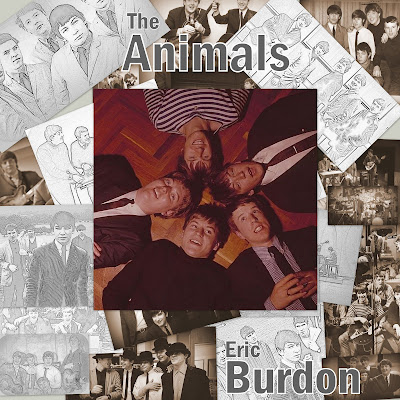 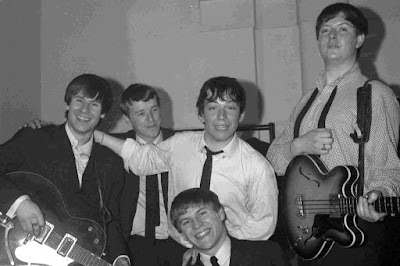 One of the most important bands originating from England's R&B scene during the early '60s, the Animals were second only to the Rolling Stones in influence among R&B-based bands in the first wave of the British Invasion. The Animals had their origins in a Newcastle-based group called the Kansas City Five, whose membership included pianist Alan Price, drummer John Steel, and vocalist Eric Burdon. Price exited to join the Kontours in 1962, while Burdon went off to London. The Kontours, whose membership included Bryan "Chas" Chandler, eventually were transmuted into the Alan Price R&B Combo, with John Steel joining on drums. Burdon's return to Newcastle in early 1963 heralded his return to the lineup. The final member of the combo, guitarist Hilton Valentine, joined just in time for the recording of a self-produced EP under the band's new name, the Animals. That record alerted Graham Bond to the Animals; he was likely responsible for pointing impresario Giorgio Gomelsky to the group.

The Animals [Compilation]Gomelsky booked the band into his Crawdaddy Club in London, and they were subsequently signed by Mickie Most, an independent producer who secured a contract with EMI's Columbia imprint. A studio session in February 1964 yielded their Columbia debut single, "Baby Let Me Take You Home" (adapted from "Baby Let Me Follow You Down"), which rose to number 21 on the British charts. For years, it was rumored incorrectly that the Animals got their next single, "House of the Rising Sun," from Bob Dylan's first album, but it has been revealed that, like "Baby Let Me Take You Home," the song came to them courtesy of Josh White. In any event, the song -- given a new guitar riff by Valentine and a soulful organ accompaniment devised by Price -- shot to the top of the U.K. and U.S. charts early that summer. This success led to a follow-up session that summer, yielding their first long-playing record, The Animals. Their third single, "I'm Crying," rose to number eight on the British charts. The group compiled an enviable record of Top Ten successes, including "Don't Let Me Be Misunderstood" and "We've Gotta Get Out of This Place," along with a second album, Animal Tracks.
In May of 1965, immediately after recording "We've Gotta Get Out of This Place," Alan Price left the band, citing fear of flying as the reason; subsequent biographies of the band have indicated that the reasons were less psychological. When "House of the Rising Sun" was recorded, using what was essentially a group arrangement, the management persuaded the band to put one person's name down as arranger. Price came up the lucky one, supposedly with the intention that the money from the arranger credit would be divided later on. The money was never divided, however, and as soon as it began rolling in, Price suddenly developed his fear of flying and exited the band. Others cite the increasing contentiousness between Burdon and Price over leadership of the group as the latter's reason for leaving. In any case, a replacement was recruited in the person of Dave Rowberry.

Animalisms In the meantime, the group was growing increasingly unhappy with the material they were being given to record by manager Mickie Most. Not only were the majority of these songs much too commercial for their taste, but they represented a false image of the band, even if many were successful. "It's My Life," a number seven British hit and a similar smash in America, caused the Animals to terminate their association with Most and with EMI Records. They moved over to Decca/London Records and came up with a more forceful, powerful sound on their first album for the new label, Animalisms. The lineup shifts continued, however: Steel exited in 1966, after recording Animalisms, and was replaced by Barry Jenkins, formerly of the Nashville Teens. Chandler left in mid-1966 after recording "Don't Bring Me Down," and Valentine remained until the end of 1966, but essentially "Don't Bring Me Down" marked the end of the original Animals.
Eric Is HereBurdon re-formed the group under the aegis of Eric Burdon and the New Animals, with Jenkins on drums, John Weider on guitar and violin, Danny McCulloch on bass, and Vic Briggs on guitar. He remained officially a solo act for a time, releasing a collection of material called Eric Is Here in 1967. As soon as the contract with English Decca was up, Burdon signed with MGM directly for worldwide distribution, and the new lineup made their debut in mid-1967. Eric Burdon and the New Animals embraced psychedelica to the hilt amid the full bloom of the Summer of Love. By the end of 1968, Briggs and McCulloch had departed, to be replaced by Burdon's old friend, keyboard player/vocalist Zoot Money, and his longtime stablemate, guitarist Andy Summers, while Weider switched to bass. Finally, in 1969, Burdon pulled the plug on what was left of the Animals. He hooked up with a Los Angeles-based group called War, and started a subsequent solo career.
Before We Were So Rudely Interrupted The original Animals reunited in 1976 for a superb album called Before We Were So Rudely Interrupted, which picked up right where Animalisms had left off a decade earlier and which was well-received critically but failed to capture the public's attention. In 1983, a somewhat longer-lasting reunion came about between the original members, augmented with the presence of Zoot Money on keyboards. The resulting album, Ark, consisting of entirely new material, was well received by critics and charted surprisingly high, and a world tour followed. By the end of the year and the heavy touring schedule, however, it was clear that this reunion was not going to be a lasting event. The quintet split up again, having finally let the other shoe drop on their careers and history, and walked away with some financial rewards, along with memories of two generations of rock fans cheering their every note. 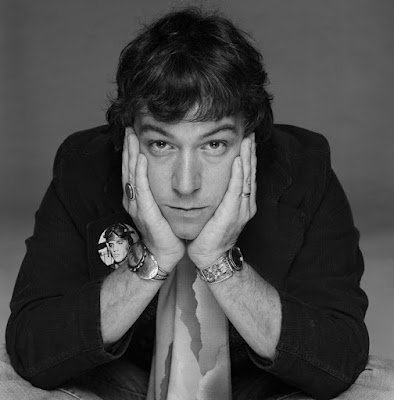 As the lead singer of the Animals, Eric Burdon was one of the British Invasion's most distinctive vocalists, with a searingly powerful blues-rock voice. When the first lineup of the group fell apart in 1966, Burdon kept the Animals' name going with various players for a few years. Usually billed as Eric Burdon & the Animals, the group was essentially Burdon's vehicle, which he used to purvey a far more psychedelic and less R&B-oriented vision. Occasionally he came up with a good second-division psychedelic hit, like "Sky Pilot"; more often, the music was indulgent, dating it almost immediately. Burdon's real triumphs as a solo artist came at the beginning of the '70s, when he hooked up with a bunch of L.A. journeyman soul/funksters who became his backing band, War. Recording three albums' worth of material in the year or two that they were together, the Burdon/War records could ramble on interminably, and would have benefited from a lot of editing. But they contained some spacy funkadelia of real quality, especially their number three hit single "Spill the Wine," which was almost recorded as an afterthought in the midst of sessions dominated by exploratory jams. Eric Burdon & War were already big stars on record and stage when Burdon, for reasons unclear to almost everyone, quit the band in 1971. War defied expectations and became even bigger when left to their own devices; Burdon, after recording an album with veteran bluesman Jimmy Witherspoon, cut a series of generally desultory solo albums. He recorded off and on after that, at times with the Animals, but has never come close to reaching the heights of his work with the early Animals and War. Burdon was always a riveting live performer, though, and he continued to tour with various incarnations of the Animals and as a solo act, branching out as a painter and author as well, and working in the studio when it suited him.

My Secret LifeBurdon continued on this journeyman path until well into the new millennium, recording such solid albums as 2004's My Secret Life and 2006's Soul of a Man. In 2012, he experienced an unexpected comeback when Bruce Springsteen made him a cornerstone of his keynote speech at South by Southwest. Burdon joined Springsteen on-stage and was soon in demand. First, he recorded an EP with the Ohio-based garage rockers the Greenhornes, and then he devoted himself to the full-length 'Til Your River Runs Dry, which received a high-profile launch in January 2013.
------------------------------
FROM JANCY

1. Live at the Club Gogo 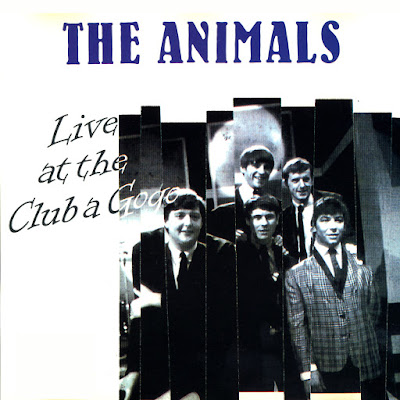 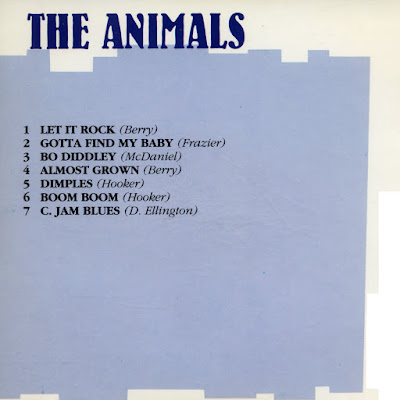 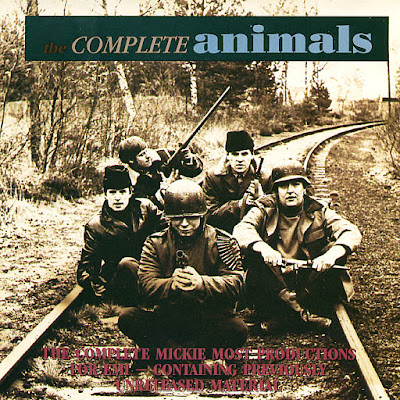 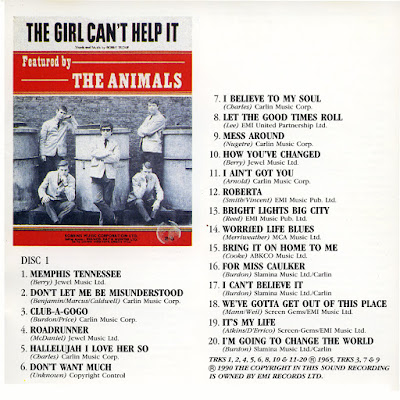 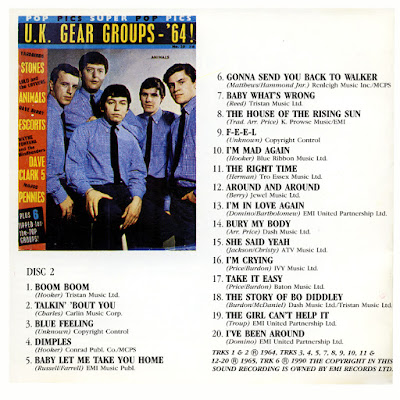 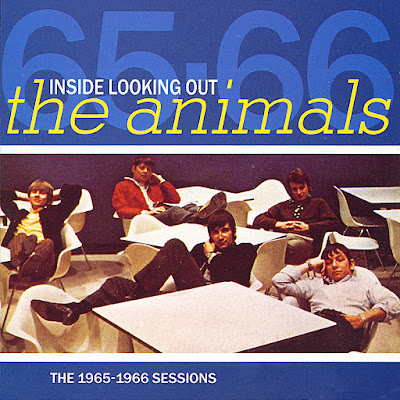 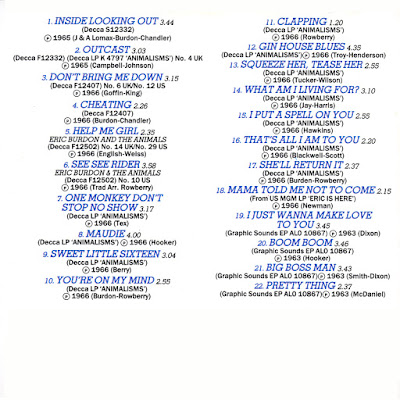 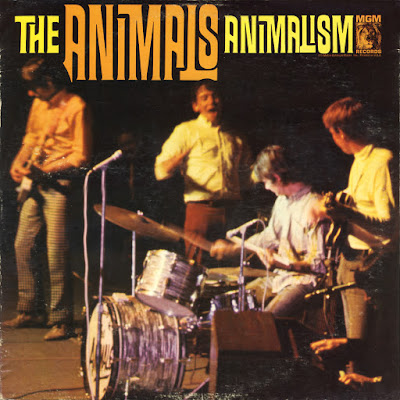 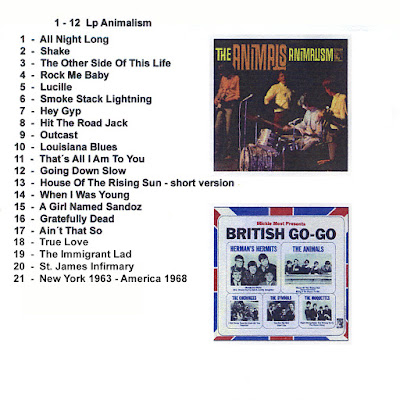 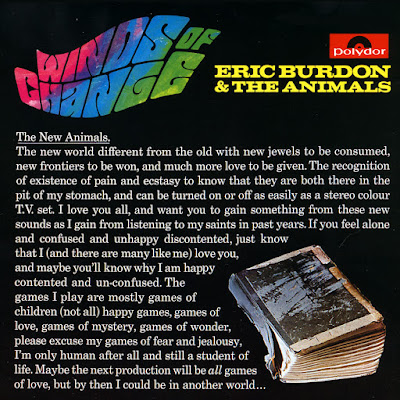 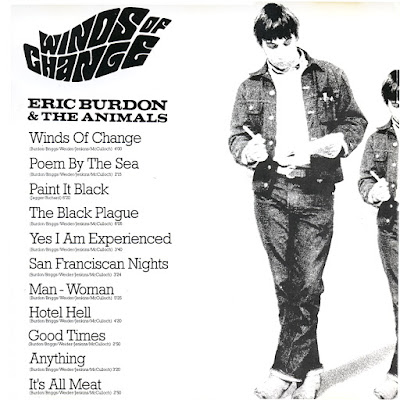 7 The Twain Shall Meet 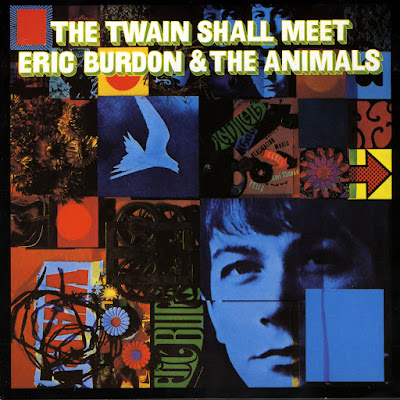 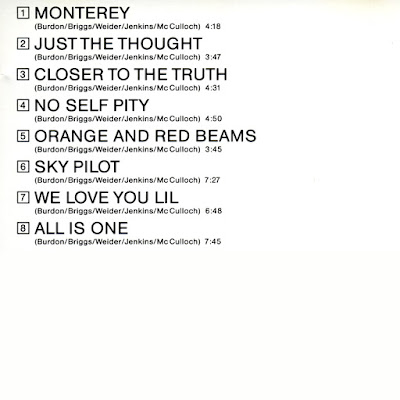 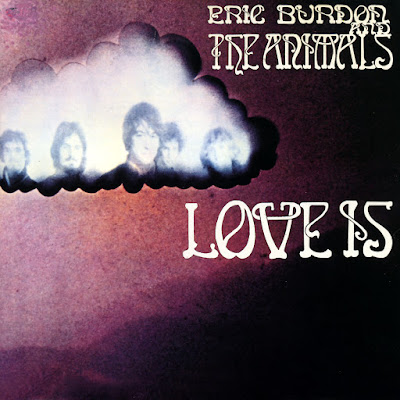 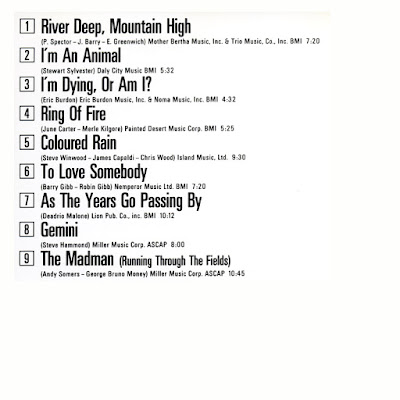 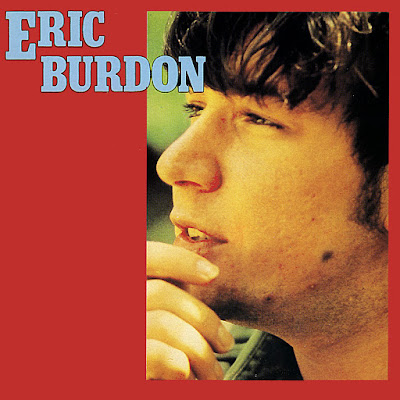 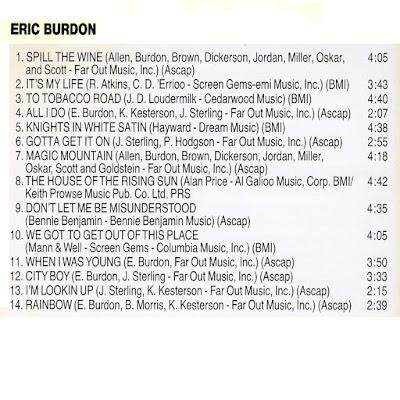 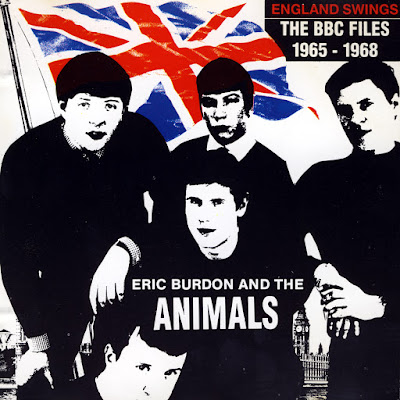 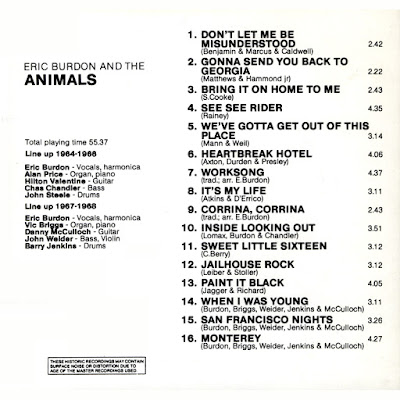 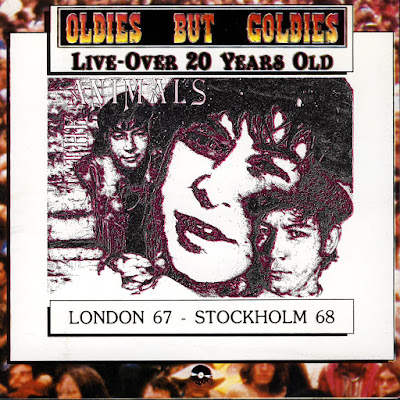 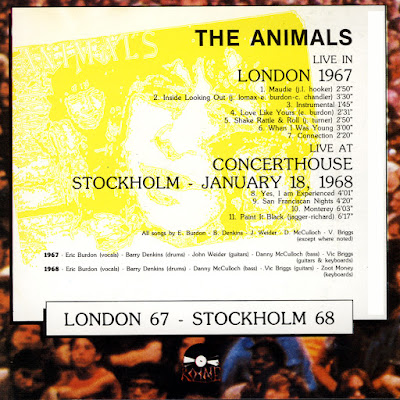 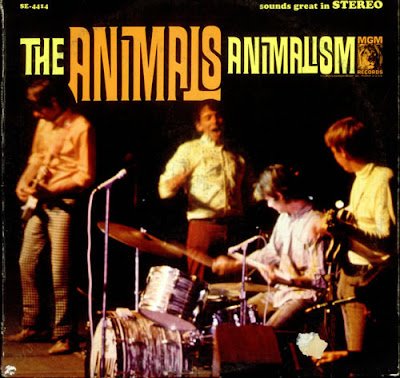