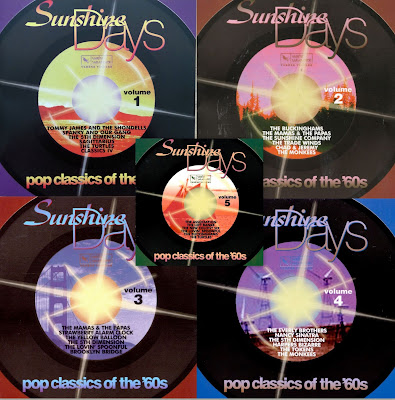 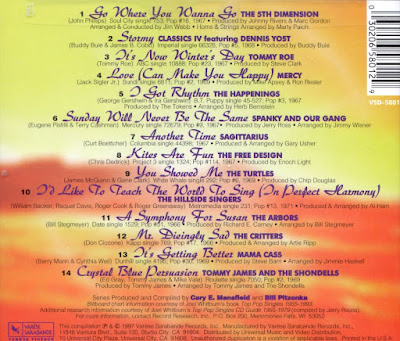 The opening gun in this five-volume set collects up 14 tracks from the sunshiney '60s with a strong pop leaning to the entire set. Obvious hits (Dennis Yost and the Classics IV's "Stormy," the 5th Dimension's "Go Where You Wanna Go," the Happenings' "I Got Rhythm," and Spanky and Our Gang's "Sunday Will Never Be the Same") sit alongside not so obvious ones (the Critters' "Mr. Dieingly Sad," the Arbors' "A Symphony for Susan," Mercy's "Love [Can Make You Happy]" and Tommy Roe's "It's Now Winter's Day") from the period, making this lightweight but fun listening that fills more than a few holes in the collection. 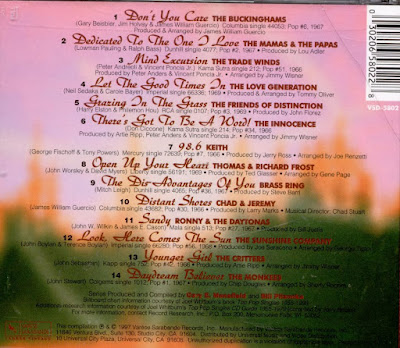 The second volume in this set features 14 more tracks from the poppiest, most non-psychedelic side of the 1960s. Although there are drivetime hits galore on here (the Buckinghams' "Don't You Care," Keith's "98.6," the Mamas & the Papas' "Dedicated to the One I Love," the Friends of Distinction's "Grazing in the Grass," and the Monkees' "Daydream Believer" for starters), the real surprises come with off-the-wall chart fodder like "Mind Excursion" by the Trade Winds, "There's Got to Be a Word!" by the Innocence, "The Disadvantages of You" by the Brass Ring, and the never-ending beauty of "Sandy" by Ronny and the Daytonas. Nice transfers throughout in this series, too. 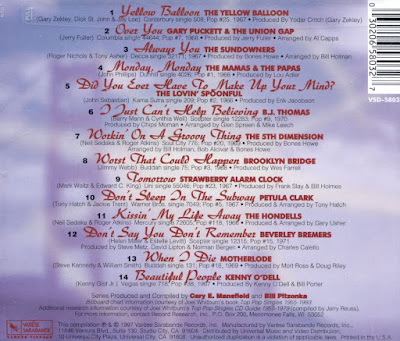 14 tracks of '60s pop sugar in a big way. This is probably the most hit-laden entry of the bunch, sporting the likes of "Monday, Monday" by the Mamas & the Papas, "Did You Ever Have to Make Up Your Mind" by the Lovin' Spoonful, "Workin' on a Groovy Thing" by the 5th Dimension, and "Don't Sleep in the Subway" by Petula Clark. But the less than standard-issue inclusion of "Tomorrow" by the Strawberry Alarm Clock, "Beautiful People" by Kenny O'Dell, "Yellow Balloon" by the Yellow Balloon, and "Kissin' My Life Away" by the Hondells make this volume just as much of a left-field delight as the other two volumes in the series. 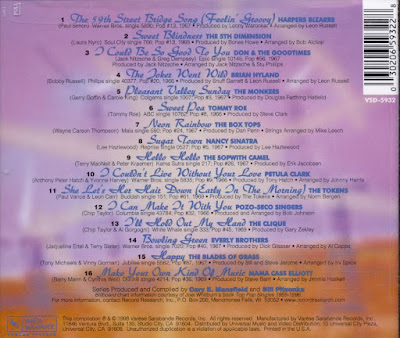 Well, the title says it all: another in a series of Varese Sarabande's fine collections of sunshine pop. As usual, these are a great way for fans of some obscure '60s pop hits to pick up some hard-to-find titles at a convenient, mid-line price. Tunes like Petula Clark's "I Couldn't Live Without You," Don & the Goodtimers' "I Could Be So Good to You" (with an awesome Jack Nitzsche arrangement), and several others make volume four a tasty little disc to pick up. Many of these aren't the tunes that you usually hear on oldies radio, and this is a great way to get 'em. The obscurities on this disc are buttressed by some bigger this like "Pleasant Valley Sunday" and "Feelin' Groovy" (and boy, has that aged well), so you have plenty to enjoy here. The one thing that might make these volumes better is if they were to cover a specific period (i.e., spring 1968). This is a minor point, however. If you enjoy one of the titles, you're likely to have a good time listening to the entire disc. 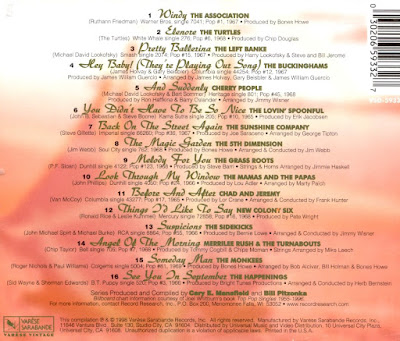 Volume five of Sunshine Days is another excellent buy for the pop music CD fan on the never-ending search for obscure '60s titles. Some of the cooler titles on volume five are "Back on the Street Again" (the Sunshine Company), "Pretty Ballerina" (the Left Banke) and the Monkees' excellent version of the Paul Williams/Roger Nichols composition "Someday Man." One of the cuts on here has really aged remarkably well, that being the Turtles' "Elenore". Boosted by drummer Johnny Barbata's unbelievable marriage of hard rock and swing, along with nimble conga overdubs, this song is an absolute joy to rediscover; the vocal performance carries it over the goal line. It's the feel that counts on records like this, and "Elenore" has it. As usual, the tracks by the Mamas & the Papas and the Lovin' Spoonful are completely ageless. To be sure, there's some crap (like the Buckinghams' abominable "Hey Baby," among others), but if you like any of the records mentioned above, you'll love volume five.