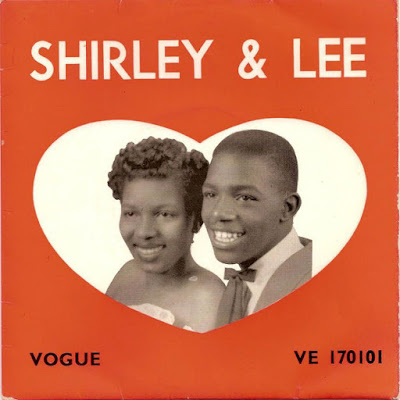 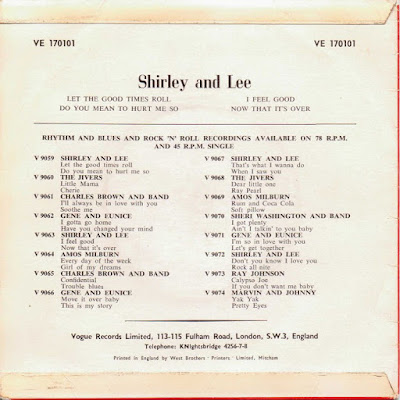 Shirley Goodman (June 19, 1936–July 5, 2005) and Leonard Lee (June 29, 1936–October 23, 1976) were two singers from New Orleans who jointly became known as the “Sweethearts of the Blues.” Born ten days apart, they met when they were children, and both of them sang in their Baptist church. They were discovered by studio owner Cosimo Matassa, who heard Goodman and Lee as part of a school singing group when they were thirteen years old. Matassa got Aladdin Records owner Eddie Messner interested in pairing them as a duo, and New Orleans veteran producer Dave Bartholomew produced their first recording, “I’m Gone,” in 1952, and backed the teenaged singers with many of the most skilled session musicians in New Orleans at the time, including saxophonists Alvin “Red” Tyler, Herb Hardesty and Lee Allen, bassist Frank Fields, and drummer Earl Palmer. “I’m Gone” climbed to No. 2 on the rhythm and blues charts in 1952. This success was followed by a string of other duets, including “Shirley, Come Back to Me,” “Shirley’s Back,” and “The Proposal,” backed with “Two Happy People.” These songs gave Shirley and Lee their stage name, and each new release continued the saga of these presumed teenage sweethearts, which added to the duo’s popularity, though they were never romantically involved; Shirley married contractor Calvin Z. Pixley in 1955. Although both Shirley and Lee sang, theirs was often a call-and-response style rather than a two-part harmony.
Flagging sales prompted Shirley and Lee to change their song topics, starting with “Feels So Good” in 1955. In 1957 they released their most popular song, the anthem “Let the Good Times Roll,” which sold over a million copies. The song was considered too suggestive by many radio stations, and they banned it from their airwaves. Shirley and Lee remained with Aladdin Records until 1959, when they moved to Warwick Records, followed by Imperial Records in 1962. The duo never equaled their biggest hit, and broke up in 1963.
Lee released some singles on his own before he died of a heart attack on October 23, 1976. Shirley moved to Los Angeles, California, and continued singing. She contributed background vocals to Sonny and Cher, as well as the double album Exile on Main Street (1972) by the Rolling Stones and Dr. John’s Gumbo (1972). She quit music for a while in the early 1970s before she reacquainted herself with Sylvia Robinson of the group Mickey and Sylvia, who was also the owner of the All Platinum label. Robinson recorded Shirley on the pre-disco hit “Shame, Shame, Shame” as Shirley and Company on Vibration Records in 1974. This track made it to No. 1 on the rhythm and blues charts and No. 12 on the Billboard pop charts. Her next single, “Cry Cry Cry,” did not sell nearly as well, and Shirley stopped singing professionally. She moved back to New Orleans, where she successfully sued to get her back royalties for “Let the Good Times Roll.” After suffering a stroke, Shirley moved to Los Angeles in 1994. She died there on July 5, 2005, and was buried at Mount Olivet Cemetery in New Orleans.