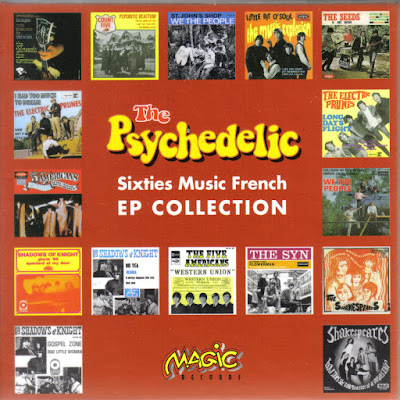 "The Vogue French singles were the most highly prized and collectible
1960's picture sleeves, and Magic Records did me a huge favor by
reproducing these exactly as they would have been seen in the
mid-60's. I'm a picture sleeve collector AND and 60's music collector.
How can you not love the bands' pictures on the front AND the music.
It's like a sugar coated cereal for diabetics.I love the look of these
pic sleeves,cause they say it all. 60's PUNK! Yeah baby!
While there's nothing new musically if you're a typical 60's music
collector,(you should already own this music stuff or you're an idiot
anyways) the little CD singles of happiness sound fabulous, and
feature 3-4 tracks per sleeve.And I count 14 sleeves, with some great
"B-sides" They also sound like nothing else-it says on the back of the
box set that they are remastered in High Definition 24-Bit.
Yeah,they really do sound different, and I must always say that most
60's singles were produced in MONO and do generally sound better
that way!
If you didn't know it,and need to be reminded, MOST 60's singles
came out originally in the MONO form,because they were geared for
the teenage lima bean market of AM radio top 40 charts,and they
have a terrific sound all of their own.When played on your 1960's car
radio with one measly speaker, those singles sounded like a symphony.
They sound better than your current CD's and vinyl and have a nice
3D feel to them. So,vinyl purists, you can still have your sound,
and quality, and eat your cake too.
I just don't know, the idea of playing only 3-4 tracks on one CD,and
then having to change the disc,is sorta stupid, but, that's the way these
singles came out originally,in France.And they're keeping that artistic
look of them nicely, they even reproduced the single's paper sleeve
centers on the printing directly on the discs! Talk about fans!
These guys are as crazy as I am, I would have done the same thing!
Make it look exactly like it did in the mid-60's, and make it sound the
same too. Bravo!
I couldn't afford these original singles,whenever I saw one, and
whenever I saw a picture of one,I drooled. So, I included scans of
each and every single,because they are pretty little jewels.
What can be said about the bands that already hasn't been said before?
I can't add anything, and besides, I'm lazy.The music speaks for itself
well enough. Some of the music is more ground breaking for the time,
and some of it is clever pop music, that's slightly better than most.
(the Electric Prunes,We The People and the like are far more
ground-breaking than say the silly Kasenetz-Katz Music Explosion
bubblegum sticky sweet pop) But still even THAT kind of music has
it's place in my black garage punk heart.
I'm not crazy about Western Union Man By The Five Americans, but
hearing it again, on these discs, actually makes it sound like fun again!
The sound is luscious, thick, and as gorgeous as a freshly popped open
original copy of the 13th Floor Elevators album right from that era.
Even you die hard vinyl purist collector scum will want to hear this.
It would be nice if you liked this stuff, and made a comment. I always
like reading your opinions and thoughts, and just knowing you appreciate
my efforts bringing you this music,it makes my little heart go pitter,patter.
Who's on this? The Electric Prunes, We The People, The Seeds,
The 13th Floor Elevators, The Music Explosion, The Five Americans,
The Syn, The Shadows Of Knight, The Count 5 and The Shakepeares."
~ MOJO REPAIR SHOP 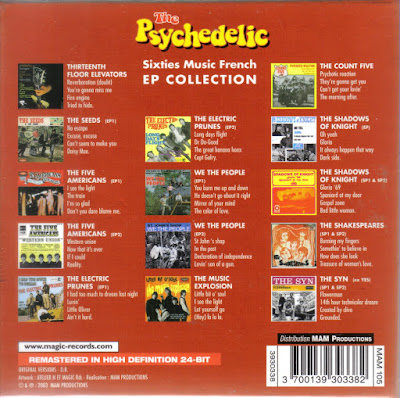