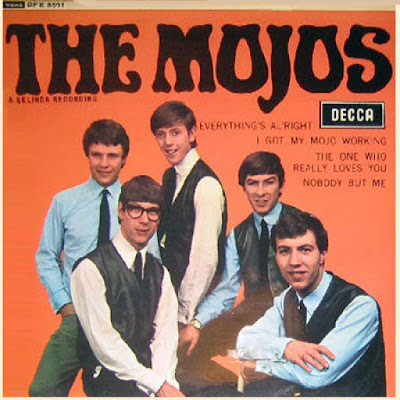 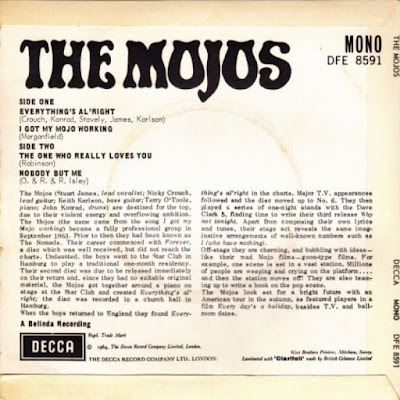 The Mojos were a British beat group from the 1960s, best known for their hit UK single, "Everything's Alright", with two other singles charting low in the UK Singles Chart in 1964.
The band formed under the name The Nomads as a duo in 1962 and originally consisted of bassist Keith Karlson (born Keith Alcock) and Jon "Bob" Conrad. After that the band was joined in September 1962 by lead singer, pianist Stu James (born Stuart Slater), rhythm guitarist, vocalist Adrian Lord (born Adrian Wilkinson). The band continued without a lead guitarist when Wood left. At the suggestion of Beatle George Harrison, pianist Terry O'Toole was added to the lineup in August 1963; Harrison having heard him play at a jazz club. The band also changed their name in August 1963 to The Mojos and Lord changed from rhythm guitarist to lead guitarist. This lineup recorded "My Whole Life Through", which was featured on the Oriole Records This is Merseybeat compilation album, and the debut single "They Say".

Despite having written the single's b-side, Lord (Wilkinson) left the group soon after its release in October 1963 and was replaced by Nicky Crouch (formerly of Faron's Flamingos) (born Nicholas Crouch, Aintree). This was the line-up that was to continue until October 1964, recording the group's three charting singles - "Everything's Alright" (no. 9), "Why Not Tonight" (no. 25) and "Seven Daffodils" (no. 30) - as well as an EP. Like many of their contemporaries the group played at the Star-Club in Hamburg, Germany.

In October 1964, Karlson, Conrad and O'Toole left the group and James and Crouch were joined by drummer Aynsley Dunbar and bassist Lewis Collins (26 May 1946 - 27 November 2013). This line-up recorded the singles "Comin' On to Cry" and "Wait A Minute" (the latter released as by "Stu James and the Mojos"), for Decca - before disbanding in September 1966.

James and Crouch formed a new version with Birmingham bass player Deke Vernon and Southampton drummer Martin Smith and released a further single "Good-Bye, Dolly Gray" in February 1967 which also failed to chart. They then spent several months playing at a luxury hotel in the Ivory Coast later that year.

James moved back to Southampton and reformed The Mojos in late 1967 with local musicians Eddie Harnett on lead guitar, Duncan Campbell on bass and Tony House on drums, and recorded "Until My Baby Comes Home", for Liberty.

Collins became an actor, starring in The Professionals, and Dunbar became a noted session musician, playing with Frank Zappa, David Bowie and John Mayall, among others. Crouch currently plays in a group called Nicky Crouch's Mojos, which features members of other 1960s Merseybeat acts, including The Swinging Blue Jeans, Rory Storm & The Hurricanes and Faron's Flamingos.