Barry and The Tamerlanes - I Wonder What She's Doing Tonight (1963) 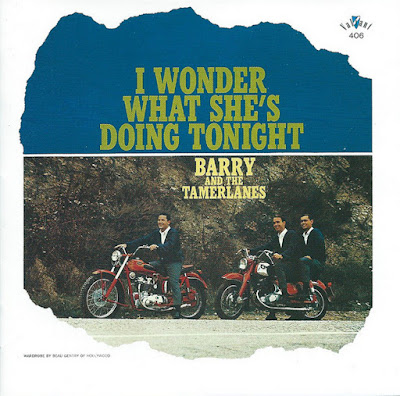 
Barry was in fact California-based Barry De Vorzon whose career goes back to the mid-fifties. At the time, he was under contract to RCA Victor and cut three singles for them in 1957 and 1958. These were nice teen rockers which fitted in well with those by Nick Venet and The Twin Tones. He then switched to Columbia but only one single was issued in 1960. However, his writing skills were rapidly developing and that's how he made his mark in the muisc business. Here are some of the first songs he wrote or co-wrote for others : 'Dreamin' and 'Girls' (Johnny Burnette - Liberty 55258 and 55345 respectively), 'Just Married' (Marty Robbins - Columbia 41143), 'Hey Little One' (Dorsey Burnette - Era 3019) and 'Treasure Of Your Love' (Eileen Rogers - Columbia 41214). Around 1962, Barry and a partner founded the Valiant label. Shelby Flint had the first release (and the first hit, albeit a minor one) on the new imprint : 'Angel On My Shoulder'. He would stay with the label until 1966.

In 1963, when the Cascades (of "Rhythm of the Rain" fame) rejected his composition "I Wonder What She's Doing Tonight", Barry De Vorzon, along with his Tamerlanes group of Bodie Chandler and Terry Smith recorded the song for the small Warner Brothers subsidiary label, Valiant. The tune made it to just outside the top-20 on the national charts but did considerably better in the New York metropolitan market. De Vorzon was no one-off tunewriter as he had compositions recorded by the likes of Johnny Burnette ("Dreamin') and Dorsey Burnette ("Hey Little One") among others that were more successful sales-wise than his own group's recordings. His most notable success however, came when "Nadia's Theme", originally "Cotton's Dream" for the movie "Bless the Beasts and Children" made its way into the top 10 in 1976.

In his formative years however, while sounding like, and geared towards, the teenage music audience of the early 60's, Barry's early recordings stood above much of what was having greater success than his in the marketplace. This CD contains the "I Wonder What She's Doing Tonight" album plus four bonus tracks including follow-up singles, that despite above-the-pack production, did not dent the national top-100. The Tamerlanes remake of the oft-recycled "Gee" was head and shoulders above most of the other attempts at this tune, some of which had some chart success yet were far less engaging. While some of these album tracks are teenage fluff stuff, there are several gems here such as "Let Me Be", a tune that should have been a chart hit. Perhaps a lack of promotion on Valiant's part was to blame for the lack of recognition of this talented songwriter and his cohorts.

Barry and his Tamerlanes music finally gets some deserved attention here, albeit from Warner Japan. The piece is well-constructed with respectable sound quality (most tracks are in stereo, the exceptions being 4, 6 and 12-16). The background notes in the booklet unfortunately are only in Japanese though the printed lyrics are in English. Notwithstanding, this import piece is a welcome addition to the music collections of the fans of the music of the pre-British invasion era. - www.amazon.com 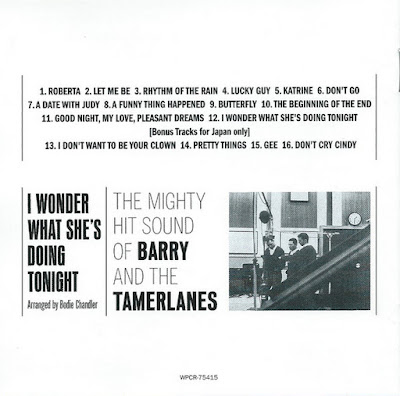 tags Barry and The Tamerlanes