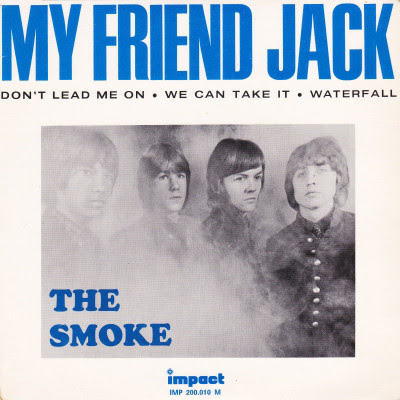 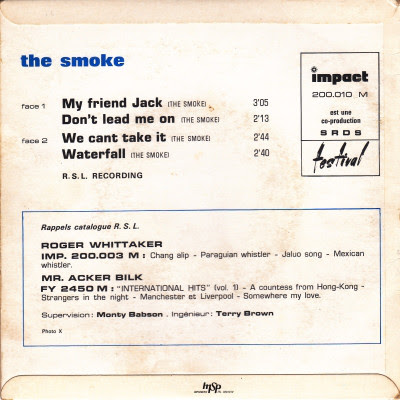 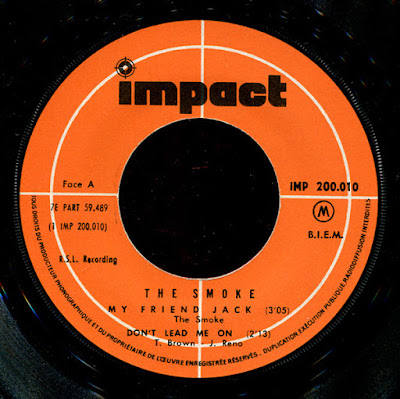 "My Friend Jack" is a psychedelic rock song released by the English freakbeat group The Smoke in 1967. It was included originally in their debut album It's Smoke Time, and It was also included (among other compilation albums) in the collection Nuggets II: Original Artyfacts from the British Empire and Beyond, 1964–1969 (Rhino, 2001).

The song was covered by artists as Boney M. You Am I, The Wondermints, She Made Me Do It, Obimen and Dreg Machine.
"My Friend Jack" was the only one international hit by The Smoke. The song seems to suggest the use of psychedelic drugs (LSD) in lines such as “My Friend Jack eats sugar lumps” and travels the world inside his mind (such as “Been on a voyage, across an ocean”).

The song was pulled off the U.K. market due to the drug connotations and never succeeded in their own country. The original content of the song was so unacceptable that "My Friend Jack" had to be rewritten before EMI would touch it; finally, it was released in February 1967. The single only made it to number 45 before being banned by the BBC, limiting it to three weeks on the U.K. charts.

The first version (somewhat slower and almost entirely modified except for the chorus) featured a more obvious content related with the hallucinogenic effect and incomprehension of the others. Lines such as "oh what beautiful things he sees" which had to be re-recorded as "Sugarman hasn't got a care". The demo is available on some CD compilations, as Real Life Permanent Dreams. A Cornucopia Of British Psychedelia (1965-1970) (Castle Select, 2007).

In mainland Europe, however, the final version of the record sold well; the group and their song was supported after appearing on an installment of the successful German television show Beat-Club, alongside Jimi Hendrix, The Who, and Cliff Bennett & the Rebel Rousers.

Because of this fortunate circumstance, "My Friend Jack" ended up riding the German pop charts to the #2, and earned the Smoke a place on a tour with the Small Faces and the Beach Boys in 1967. The single charted high in Switzerland, France, and Austria as well, and suddenly there was demand for a Smoke LP in Germany, entitled later It's Smoke Time.

The song is characterized by a march beat and mix of shimmering and crunchy reverb-laden guitar (its most notable sound). It presents an aggressive riff like the most delightfully subversive piece of freakbeat, heavily influenced by The Who's power-chord and the trippy cheerfulness, like some songs with drug references from that era.

According to Matthew Greenwald in Allmusic: “The song opens with a tremolo-laden slide guitar riff from Mal Luker, which creates a trippy, unsettling but wholly interesting hook. The main melody is a bouncy, mid-tempo slice of pop-psychedelia, filled with a buoyancy that equates this to an English version of the Turtles on psychedelic drugs. The effervescent chorus is a fabulous singalong affair, making it instantly accessible”.

" My Friend Jack" was included in the documentary film John Peel's Record Box, made by Elaine Shepherd, released on 14 November 2005 on Channel 4 (British public-service television). The film was nominated for Primetime Emmy Award.