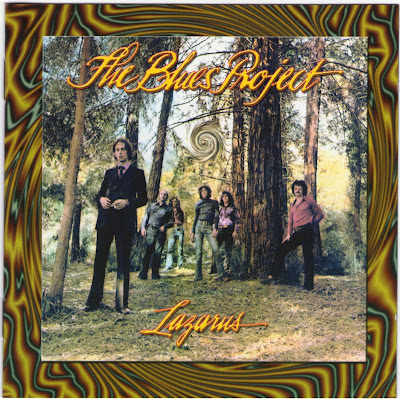 Biography by Richie Unterberger
One of the first album-oriented, "underground" groups in the United States, the Blues Project offered an electric brew of rock, blues, folk, pop, and even some jazz, classical, and psychedelia during their brief heyday in the mid-'60s. It's not quite accurate to categorize them as a blues-rock group, although they did plenty of that kind of material; they were more like a Jewish-American equivalent to British bands like the Yardbirds, who used a blues and R&B base to explore any music that interested them. Erratic songwriting talent and a lack of a truly outstanding vocalist prevented them from rising to the front line of '60s bands, but they recorded plenty of interesting material over the course of their first three albums, before the departure of their most creative members took its toll.

Live at the Café Au Go Go The Blues Project was formed in Greenwich Village in the mid-'60s by guitarist Danny Kalb (who had played sessions for various Elektra folk and folk-rock albums), Steve Katz (a guitarist with Elektra's Even Dozen Jug Band), flutist/bassist Andy Kulberg, drummer Roy Blumenfeld, and singer Tommy Flanders. Al Kooper, in his early twenties a seasoned vet of rock sessions, joined after sitting in on the band's Columbia Records audition, although they ended up signing to Verve, an MGM subsidiary. Early member Artie Traum (guitar) dropped out during early rehearsals; Flanders would leave after their first LP, Live at the Cafe Au-Go-Go (1966).
The eclectic résumés of the musicians, who came from folk, jazz, blues, and rock backgrounds, was reflected in their choice of material. Blues by Muddy Waters and Chuck Berry tunes ran alongside covers of contemporary folk-rock songs by Eric Anderson and Patrick Sky, as well as the group's own originals. These were usually penned by Kooper, who had already built songwriting credentials as the co-writer of Gary Lewis' huge smash "This Diamond Ring," and established a reputation as a major folk-rock shaker with his contributions to Dylan's mid-'60s records. Kooper also provided the band's instrumental highlights with his glowing organ riffs.

Projections The live debut sounds rather tame and derivative; the group truly hit their stride on Projections (late 1966), which was, disappointingly, their only full-length studio recording. While they went through straight blues numbers with respectable energy, they really shone best on the folk and jazz-influenced tracks, like "Fly Away," Katz's lilting "Steve's Song," Kooper's jazz instrumental "Flute Thing" (an underground radio standard that's probably their most famous track), and Kooper's fierce adaptation of an old Blind Willie Johnson number, "I Can't Keep from Crying." A non-LP single from this era, the pop-psychedelic "No Time Like the Right Time," was their greatest achievement and one of the best "great hit singles that never were" of the decade.
The Blues Project Live at Town Hall The band's very eclecticism didn't augur well for their long-term stability, and in 1967 Kooper left in a dispute over musical direction (he has recalled that Kalb opposed his wishes to add a horn section). Then Kalb mysteriously disappeared for months after a bad acid trip, which effectively finished the original incarnation of the band. A third album, Live at Town Hall, was a particularly half-assed project given the band's stature, pasted together from live tapes and studio outtakes, some of which were overdubbed with applause to give the impression that they had been recorded in concert.
Kooper got to fulfill his ambitions for soulful horn rock as the leader of the original Blood, Sweat & Tears, although he left that band after their first album; BS&T also included Katz (who stayed onboard for a long time). Blumenfeld and Kulberg kept the Blues Project going for a fourth album before forming Seatrain, and the group re-formed in the early '70s with various lineups, Kooper rejoining for a live 1973 album, Reunion in Central Park. The first three albums from the Kooper days are the only ones that count, though; the best material from these is on Rhino's best-of compilation. 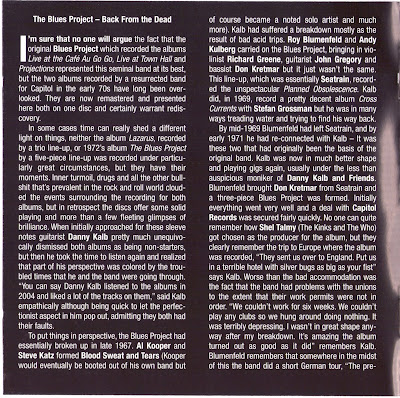 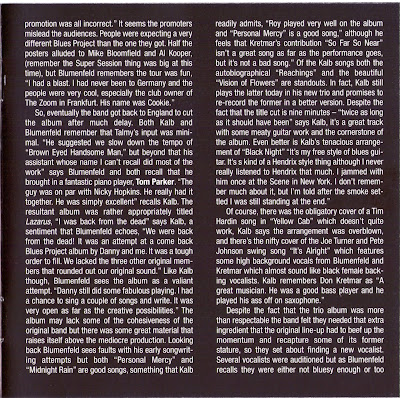 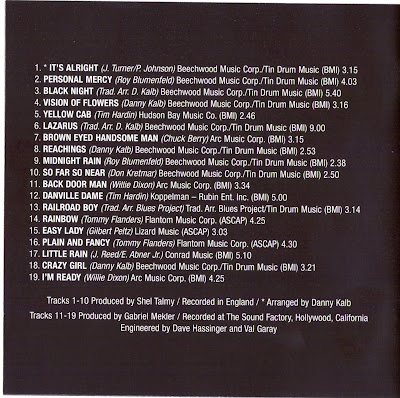