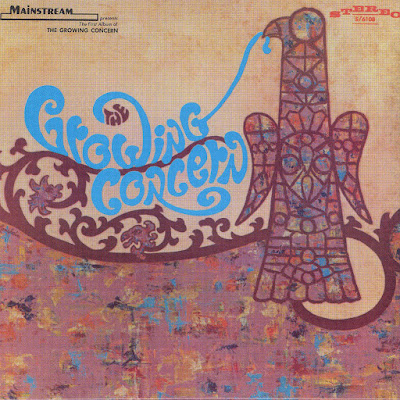 Although virtually nothing is known of Growing Concern, their only album (Mainstream, 1968) is an enjoyable piece of West Coast psychedelic pop. The opening track 'Hard, Hard Year' sets the tone for the album: it opens with melodic guitar work, which is joined first by bass, then by excellent keyboards; it also features beautiful female vocal harmonies from group members Bonnie MacDonald and Mary Garstki. 'Edge Of Time' features excellent lead guitar work, as does 'Tomorrow Has Been Cancelled'; 'A Boy I Once Knew Well' is a folky lament, which again features fine vocal harmonies, keyboards, and guitar work. Overall, quite a good blend of folk rock, pop, and psychedelia. The album is brilliantly recorded, and is of a consistently high musical quality. The band surely deserved a better fate than the obscurity to which they were consigned by the bizarre business practices of the Mainstream label.

Although formed primarily as a blues label, Mainstream Records released a number of interesting psychedelic albums in the late 60s. Some of the better of these include Bohemian Vendetta, The Jelly Bean Bandits, Orient Express, and The Growing Concern!

From Bonnie MacDonald:
As a member of the Growing Concern I am very gratified and more than a little surprised that our album has resurfaced after so many years. We were a Chicago based group and could’nt have been more different in our musical styles.

We had everything from the Elvis greaser vocalist, old Italian wedding organist, factory worker guitarist and of course me with a preppie background. The others were simply fine musicians. Mary Garstski was a beautiful rather small quiet girl that could belt out a song like I never could! I don’t think that anyone, including the group , really appreciated the original songs that Ralph, Dan and John wrote. It’s nice to see that they have finally been brought to light.

My voice was softer and melodic than what you would normally find in a psychedelic(PSYCHEDELIC MAN) group. Sorry ,you had to there. Bob Shad did get us into the studio to record not once but twice. Once in Chicago and once in New York. Unfortunately there was a slight distraction called the Viet Nam war that took our wonderful guitarist and drummer away before we went to New York and the group just did’nt work without them.

The whole experience was a blast! Who would have thought that I would be immortalized as a rocker from the coolest generation ever! Far out! I have tried to reach the other members of the group but have not been able to find them.If anyone knows how to find any of them please e-mail me. Still rockin’ – and not in a chair yet. BJM

“This self-titled album by The Growing Concern curiously first saw the light of day in 1969 on Bob Shad’s Mainstream label, an imprint more familiar to jazz and blues fans than devotees of psych/pop. Shad, who had worked as an A&R man for Mercury, Savoy and Emarcy in the ’50s, working with the likes of Sarah Vaughan, Blue Mitchell and Curtis Fuller, had the fortune to sign the then-unknown Big Brother And The Holding Company, whose contract, along with that of the band’s vocalist Janis Joplin, Shad wisely sold for a not-insignificant sum to Columbia.

Perhaps Shad thought he was going to repeat his commercial triumph with The Growing Concern. However, the band was a different proposition altogether with its emphasis on beautiful vocal harmonies and fantastic guitar and organ work rather than the Joplin-dominated R&B of Big Brother. Consequently, Shad only allowed the group into the studio on a single occasion, dropping them from the label after this, their eponymous debut. All in all, this is a fine album.” 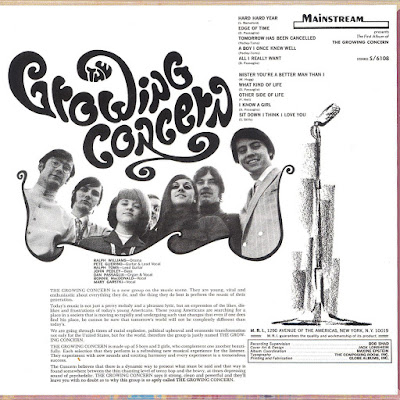