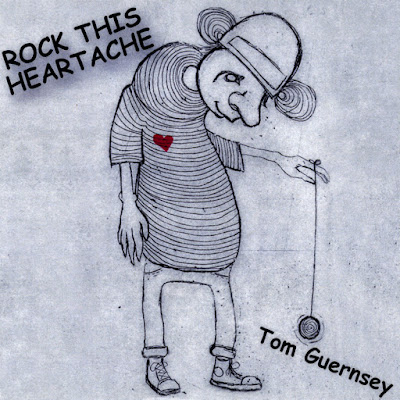 In 1966, Maryland rock band The Hangmen’s catchy tune “What a Girl Can’t Do” pushed the Beatles' “We Can Work it Out” out of the No. 1 slot on D.C.-area top-hits station WEAM.  The song was penned by then Montgomery College student and guitarist Tom Guernsey—-at first for his prior band, The Reekers, before it was released under the Hangmen name. "What a Girl Can't Do" has since been covered by D.C.’s Slickee Boys and countless garage rock bands around the world.

On Oct. 3, Guernsey died of complications of amyotrophic lateral sclerosis—-ALS, or Lou Gehrig's Disease—-at Kaiser Sunnyside Medical Center in Clackamas, Ore. He was 68.

Guernsey, who grew up in Garrett Park, Md., and attended Walter Johnson High School, moved to Portland, Ore., six and half years ago with his wife Adrienne to be near his children and grandchildren. I spoke with Adrienne about her husband's legacy.

Adrienne had known Tom since they were kids, and she often traveled with his bands. She says the Hangmen played from New York down to Florida, but did most of their gigs on the region's Catholic teen-club circuit, along with embassies, clubs like the Silver Dollar on M Street  NW in Georgetown, and opening for touring bands like the Dave Clark Five. They also played at parties and Rehoboth Beach.

The Hangmen’s vocalist Dave Ottley was from Scotland, and Adrienne speculates that he had the connections to get embassy gigs—-she recalls shows at the Moroccan and British embassies. There's also a photo online of the Hangmen with the Algerian ambassador. The garagehangover.com website suggests that the Hangmen’s management, lawyer Arnold Stahl (whose sons are in D.C. hardcore band Scream) and Mike Klavans of WTTG TV, had the connections.

The Hangmen had other unusual gigs: Adrienne says the Hangmen played at Robert and Ethel Kennedy’s house a couple of times. She's still bemused by the Hangmen's 1966 appearance at Falls Church store Giant Records—-right when “What a Girl Can’t Do” was on the radio. Billboard magazine reported that 400 people were inside the store and 1,500 outside, and that police had to be called to quell a near-riot that had already left display cases damaged and fans fainting. The band recorded several singles, an album called Bittersweet, and appeared on several TV shows, but by 1967, The Hangmen were no more. Adrienne says they were “right on the cusp of making it huge but I don’t quite know what happened.”

Tom Guernsey soon started making a living writing TV-commercial jingles and producing bands, which he did for the rest of his life. Adrienne says “he probably has every little bit of music he has written in an envelope in his studio.” Their son Ben wants to create a digital archive so it's all on there, she says. Guernsey also created music for political spots and taught guitar. From his rock-star days, she says, “he got royalty checks periodically but they sold their souls away with a lot of the original stuff.” Guernsey’s first band, The Reekers, reunited periodically, and he later recorded in 2003 his own acoustic-guitar jazz album, Same Place, Different Time.

Guernsey was diagnosed with ALS nearly a year ago."The muscles in his arms started twitching, and just within a few months he lost all of the muscle mass in his upper body,” Adrienne says. “His hands got extremely weak.  He hadn’t been able to play the guitar for months and that was like the worst for him because Tom has played the guitar since he was around 10 years old. It was always in his hands. It was part of him. It was his identity."

“He made a real conscious choice," Adrienne says. "If he couldn’t do what he wanted to do, he just didn’t want to fight it, I’m afraid.”

Guernsey's family plans to hold a memorial in his hometown next year. “We’re not big into funerals," says Adrienne. "We had a little memorial at the hospital the day that he died with a roomful of people [including his brother, Takoma Park musician John Guernsey]. We’re gonna have a memorial service here [in Portland] but not for a few months. Then come back there to where we have lived and have a memorial service there at the Garrett Park Town Hall, but its not gonna happen till probably June.” Adrienne and her children have also maintained Guernsey's Facebook page, on which friends, relatives, and musicians from around the world have posted photos and recollections of the friendly guitarist.

Adrienne hopes that the final project her husband was working on, a movie called The Girl From California, will come out. Former City Paper staffer Dave Nuttycombe, who's in the movie, describes it as “a sort of documockumentary about the afterlife of 'What a Girl Can't Do.' He found hundreds of YouTube versions from around the world and through the decades. It is a certifiable classic.” Adrienne says that “Nils Lofgren did a crazy little thing for it.”

“It’s kinda the story of his life but in a funny way,” Adrienne says. “Tom could make fun of himself but he always took his music really seriously.”