The Pretty Things - The ...Years 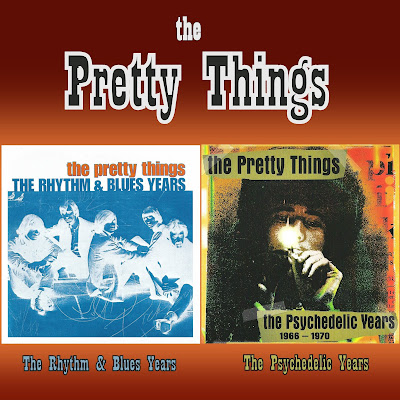 Before the Pretty Things began dabbling with psychedelia in the late '60s, they were primarily a R&B-influenced rock band. The double-disc, 34-track The Rhythm & Blues Years collection compiles the work from that early era in the band's history. Featured songs include the group's biggest hit from the time, "Don't Bring Me Down," along with less-remembered songs like "Honey, I Need," "Judgement Day," "The Moon Is Rising," "I'm Gonna Find Me Substitute," "13 Chester Street," "Oh Baby Doll," "Get a Buzz," and many more. Overall, this is a great one-stop collection for anyone interested in the group's more-anchored and less-heady work. 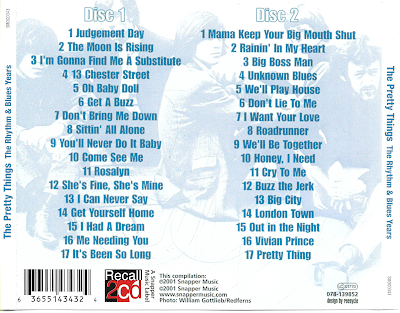 After a few years of outdoing the Rolling Stones at their own game, Messrs. May and Co., clearly affected by their love of swinging London nightlife and all that went with it, injected their primal R&B roots with added spice (as Mike Stax, "numero uno Los Pretty Things fan," points out in his excellent liner notes). "Can't Stand the Pain" (from the 1965 Get The Picture album) has "a remarkably effective mood with a sense of a dreamy disembodiment that foreshadows what was yet to come with the arrival of psychedelia." By April 1966, B-side "LSD," yet another controversial shot in the Pretty Things' canon, helped pioneer the "freakbeat" sound, whilst the media's attacks on the Pretties slack, druggy values were foremost to the changing times -- in fact, the record was a play on words about the English economy and not a celebration of the merits of LSD usage. However, the band was clearly well-aware of LSD and its effects, and over the coming months further musical explorations that were to steer the band away from their earlier tough R&B sound were to occur. After the rather well-thought inclusion of these two late 1965 and early 1966 tracks, the rest of this double CD focuses on output that was recorded across the 1967 to 1970 psychedelic era. Cuts from the much maligned Emotions album, released in May 1967, take on a new edge when singled out from the album's far from psychedelic brassy pop numbers. The visceral "There Will Never Be Another Day" chronicles an LSD trip, whilst "The Sun" and "Growing in My Mind" show a far more introspective side well suited to the floral times. A primer for this set is an earlier take of "Children," which crackles with raga guitar in an altogether less commercial manner than the album version. Although somewhat of an albatross around the band's neck, when intermingled with their psychedelically charged later material, the chosen cuts from Emotions certainly indicate the direction they were intending to take. The pre-S.F. Sorrow November 1967 single "Defecting Grey" was the pinnacle of not only the Pretty Things' experimentation with psychedelia, but one of the finest examples of British psychedelia. A cacophony of fuzz guitar, trippy lyrics, fairground organ, and sitar, with numerous twists and turns in tempo, mood, and thematics. Like an acid trip, "Defecting Grey" was a rollercoaster of a ride that was fun, disturbing, and overall invigorating. At last the band had conquered psychedelia. Although they would never match its lysergic quality again, the Pretties were now a bona fide "underground freak band." After a following single ("Talkin' About the Good Times"/"Walking Through My Dreams") that utilized the heady sounds of the Mellotron, the psychedelic instrument that was second only to the sitar, the band soon unleashed the song cycle that they had been working on over the past months. S.F. Sorrow displayed the darker, more theatric side of psychedelia. Based on a short story written by Phil May, the album shifts moods and textures, making great usage of Norman Smith's production techniques at the Abbey Road studios. On this set, the selected album cuts are taken out of their original context, but as Stax notes, work superbly as songs on there own accord. (Also included on this CD are three tracks that were recorded for the September 1998 internet webcast of S.F. Sorrow. These are proof that the band still has it, even 30 years on.) And as if a cohesive compilation of the band's psychedelic era wasn't enough, Snapper unleashed two previously unreleased live cuts that were recorded in Amsterdam in March 1969. "Alexander" was previously recorded for the DeWolfe Music Library as extra income for the non-hitmakers and was featured in the swinging '60s Norman Wisdom farce What's Good for the Goose, where the Pretties mimed to it in all of their hippy glory. Live, they attack the song with psych-punk venom, along with an equally powerful version of "She Says Good Morning" from the same concert. (These two searing examples of the band at the height of their acid-tinged period warrant purchase for those who have every other cut.) Although psychedelia was becoming passé and heavy blues-rock and progressive rock the norm, the September 1970 album Parachute continued in a similar vein to its predecessor, although without such an evident acid edge. In essence, it is to S.F. Sorrow what the White Album was to Sgt. Pepper's -- further Beatles' comparisons may also be drawn from May, Waller, and Povey's mastery of three-part harmony vocals. Of course, Parachute was smoother and at times far more heavy than the band's 1967 psychedelic explosion "Defecting Grey," but like many other bands in 1970, the Pretties had not entirely shaken off their psychedelic manacles. By November 1970, the superb Wally Waller-sung single "October 26" ended the Pretties' involvement with psychedelia. Not only does this set neatly draw together nearly five years' worth of the Pretties most exciting era; it is also very refreshing for the fact that it does not chronologically arrange the track listing. A far more interesting listening experience is to be had hearing the songs in this context than playing Emotions, S.F. Sorrow, and Parachute in succession. Rather than focusing on the progression from R&B through to late '60s rock and the lysergic path that that musical journey took, this set solely focuses on the songs. And the sadly neglected Pretty Things certainly had a bastion of those. 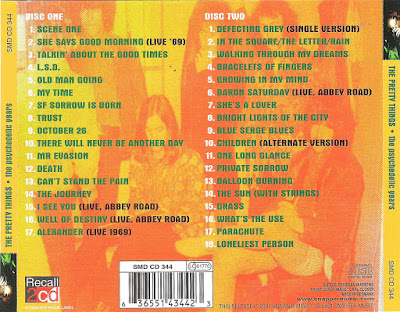