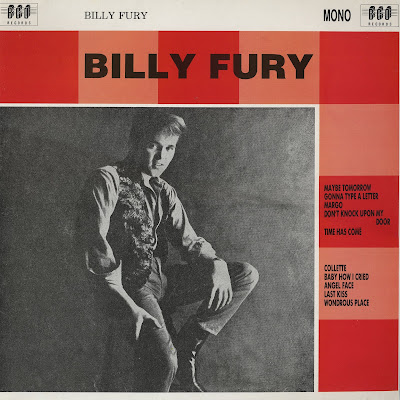 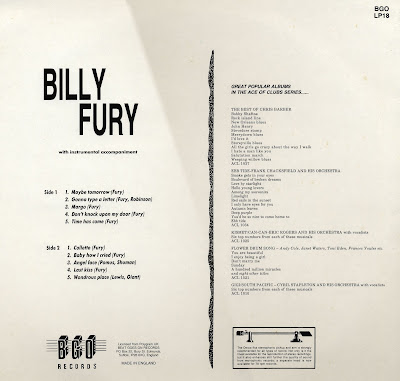 Ronald Wycherley (17 April 1940 – 28 January 1983), better known by his stage name Billy Fury, was an English singer from the late 1950s to the mid 1960s, and remained an active songwriter until the 1980s. Rheumatic fever, which he first contracted as a child, damaged his heart and ultimately contributed to his death. An early British rock and roll (and film) star, he equalled the Beatles' record of 24 hits in the 1960s, and spent 332 weeks on the UK chart, without a chart-topping single or album.

AllMusic journalist Bruce Eder stated, "His mix of rough-hewn good looks and unassuming masculinity, coupled with an underlying vulnerability, all presented with a good voice and some serious musical talent, helped turn Fury into a major rock and roll star in short order". Others have suggested that Fury's rapid rise to prominence was due to his "Elvis Presley-influenced hip swivelling and, at times, highly suggestive stage act."

A1 Maybe Tomorrow
A2 Gonna Type A Letter
Written-By – Robinson*
A3 Margo
A4 Don't Knock Upon My Door
A5 Time Has Come
B1 Colette
B2 Baby How I Cried
B3 Angel Face
Written-By – Pomus, Shuman*
B4 Last Kiss
B5 Wondrous Place
Written-By – Giant*, Lewis*