The Honeycombs - In Tokyo+Single Bonus 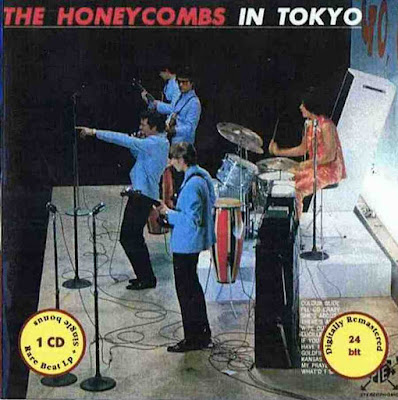 Mostly renowned for their 1964 Top Five hit "Have I the Right," the Honeycombs in their hit-making years were pretty much a vehicle for producer Joe Meek and the songwriting-management team of Ken Howard and Alan Blaikley. The group was originally formed in Hackney in November of 1963 by guitarist Martin Murray. His day job was managing a hair salon, and when he formed the band, he brought along his assistant, Anne Margot Lantree, who was nicknamed "Honey" and used that name on-stage -- she played drums, a true rarity among female musicians in those days. Her brother John Lantree joined on bass, and Alan Ward played lead guitar. And for lead vocalist, they had Dennis D'Ell (born Denis Dalziel). Their original name was the Sheratons (some sources list it as the Sherabons) -- something Murray remembered seeing on the side of a van -- and they got a three-times-a-week gig at a pub called the Mild May Tavern, on Balls Pond Road in London's East End. Rhythm guitarist and leader Murray also added to the appealing eccentricity of the band's look with his bespectacled presence -- to see him on the cover of their albums, one would think he was the group's accountant, but what made the picture even better was that he was a great player in his own right. At that time, their music consisted entirely of R&B and rock & roll standards interspersed with instrumentals.

They were lucky enough to be spotted at the Mild May Tavern by Alan Blaikley, then a BBC employee and one-half of an aspiring songwriting team. Blaikley and his partner Ken Howard had written a song called "Have I the Right" that they were trying to get recorded by the right group. And he was most impressed with the Sheratons' sound, and by the size and enthusiasm of the teenage crowds that they drew. Soon after, producer Joe Meek entered the picture. A "mad genius" in the recording field, Meek already had a pair of major successes to his credit with "Tribute to Buddy Holly" by Mike Berry & the Outlaws, and the international hit "Telstar," by the Tornados -- he was always on the lookout for songwriters and for groups that could benefit from his expertise. The Sheratons auditioned for Meek and he liked both the group and the Blaikley/Howard song -- and, more importantly, what he thought he could do with them. He found the Sheratons' sound something he could work with and shape in his own way; equally important, the bandmembers themselves were willing to play along with his sometimes wild and unorthodox recording techniques; they even added their collective footstomps to a key rhythm phrase on the finished version of "Have I the Right," recorded in multiple overdubs as the five members pounded their feet in unison on the staircase in the residential building where Meek had his home studio. The record was released on the Pye label, but not before the quintet changed its name.

Sources differ as to whether it was Meek, Pye Records managing director Louis Benjamin, or the bandmembers who brought about the name change to the Honeycombs. But one consequence of the new name was to reinforce the attention paid to their most visual asset, Honey Lantree. After an initial stall midway in the charts, the single was picked up by the renowned pirate station Radio Caroline, and "Have I the Right" reached number one in England (and also, subsequently, in Australia, South Africa, and Japan as well) and number four in America. With bee-sting guitar leads and D'Ell's wobbling vocals, which sounded like a Gene Pitney unable to hold notes, "Have I the Right" was a single that one either loved or hated, but couldn't forget. The relatively faceless group afforded Meek perhaps his fullest artistic expression in the studio; all the Honeycombs' singles and albums feature variable-speed vocals, ghostly organ, unpredictable runs, majestically thudding drums, and super-compressed sonics. A self-titled album, all but one of the songs written by Blaikley and Howard, followed in October of 1964, and in between the single and the LP's release there was a frantic ten months of international touring, television appearances, and shooting spots in jukebox movies, made more complicated when Murray broke his leg. And amid that flurry of work, the group managed a couple more minor American hits -- "Is It Because" and "I Can't Stop," the latter a killer little pop/rock number -- but their fortunes in their own country soon began to fade. "Is It Because" and their rendition of the Ray Davies-authored ballad "Something Better Beginning" barely made it into the Top 40, although the Honey Lantree-sung "That's the Way" reached number 12.

The Honeycombs weren't exactly one-hit wonders, though they never found anything to match "Have I the Right" in sheer impact on listeners and radio around the world. But as a result of that single, their debut album attracted enough interest to get released outside of England. The American version, identical except in title to its U.K. counterpart, was released in the United States by Vee-Jay Records -- which had scored big by licensing the Beatles' early singles in 1963 -- on its newly created Interphon imprint, and, in fact, was the only LP ever issued on that label. The group's sound was a strange combination of influences -- Ward's ringing, stinging lead guitar, paired with John Lantree's bass, Murray's driving rhythm guitar, and Honey Lantree's drumming (all displaying a larger-than-life sound) generating a thumping beat, combined to form a sonic texture strongly reminiscent of the Tornados, Meek's previous resident band. And placed behind D'Ell's weirdly quavering yet impassioned vocals, and all of that often ornamented with what sounded like an outsized roller-rink organ, the effect was sonically mesmerizing.

The Honeycombs' records all seemed to possess an almost manic emotional edge, even by the standards of the British Invasion. Between the outsized sound of the musicians and D'Ell's vocals, "Color Slide" and "Once You Know" seemed to embody the kind of passionate desperation that characterized many a teen crush, and each was a frantic, crisply metallic-sounding pop-symphony paean to romance as only the young seem to rush into and drown in it -- like Phil Spector in steel. The ballad "Without You It Is Night" treaded on Roy Orbison's quasi-operatic territory, while "That's the Way" -- offering Honey Lantree's singing -- gave a slightly more cheerful, upbeat outlook on romance. And all of it, with Meek's trademarked sound compression, hit the listener subliminally like a punch in the chest.

All Systems Go As rapidly as their success came, so the band began to fall apart after less than a year. Frustrated by their inability to repeat their debut success, Martin Murray quit the group he'd organized November of 1964 and started a new band, the Lemmings, who managed to get out one single on Pye before disappearing. He then went solo with one 45 release to his credit. His replacement, Peter Pye, who'd previously sat in on the band's sessions during Murray's convalescence, joined as a permanent member in late 1964 and the group continued, cutting quite a few singles and two albums before Meek's death in early 1967 effectively finished the group as well. Their fortunes had faded long before that in England and America -- by 1965, rock & roll had moved past the sound that the Honeycombs were known for, but it was just then that their popularity soared in northern Europe, Germany, and, especially, Japan and the Far East. They toured to rousing audience response and their records were soon aimed at those markets as well. This shift coincided with Howard and Blaikley's decision to move Honey Lantree out from behind the drum kit and into center stage (Viv Prince of the Pretty Things stepped into the drummer's spot on-stage). It was a long time until their second album, All Systems Go, which didn't see the light of day until November of 1965; by that time, Blaikley was doing most of the songwriting solo and had only four compositions represented; and that same month, in Japan, an album called Honeycombs in Tokyo was issued. All Systems Go included a cover of one Ray Davies' song, "Emptiness," which was apparently never recorded by anyone else. And Honeycombs in Tokyo featured several rarities, including the group's recordings of "I'll Go Crazy," "She's About a Mover," "Wipe Out," "Lucille," "Kansas City," "Goldfinger" and "What'd I Say," most of which seemed to represent their original stage act more accurately than the content of their two more widely circulated albums did. The group's fortunes declined considerably after 1965, however, and Howard and Blaikley -- who would later place songs with Lulu and Elvis Presley, among others -- had by then turned their attentions to a new discovery, Dave Dee, Dozy, Beaky, Mick & Tich, who were more in sync with the post-Merseybeat taste of the times. From 1966 onward, Honey Lantree and her brother, still comprising the rhythm section, were leading a version of the group called the "New Honeycombs," whose lineup included Rod Butler (lead guitar, vocals), Colin Boyd (vocals, guitar), and Eddie Spence (keyboards, vocals), and ended up playing the cabaret circuit, the last refuge of past-their-prime rock & roll acts. Meek's suicide in 1967 closed the door to chances of any further recording success, and they disbanded, though D'Ell released a pair of 45s for British CBS and Decca that same year. D'Ell (who passed away from cancer in 2005) later worked with bluesier, less pop-oriented bands, and also fronted several latter-day versions of the Honeycombs into the '90s, a time when Murray also resumed using the name (sometimes as "Martin Murray's Honeycombs") in cabaret settings. Murray eventually secured his rights to the name and reorganized a version of the Honeycombs in 2004, though later, in the second half of the decade, there was an ongoing dispute between him and several other interim members, who were using the name the "New Honeycombs." Drummer Honey Lantree, who did not participate in any of the Honeycombs reunions, died on December 23, 2018 at the age of 75.

The Honeycombs - In Tokyo+Single Bonus 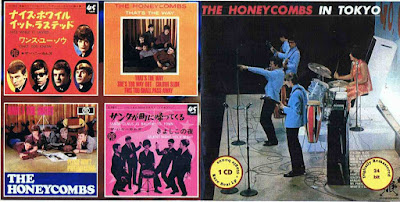 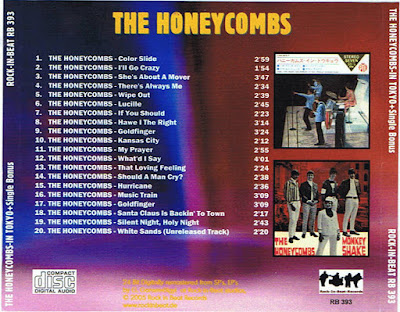 tags Rock In Beat, The Honeycombs