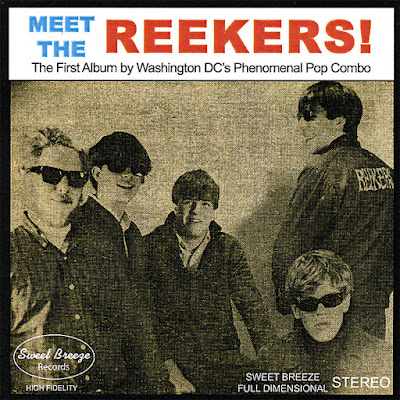 Tom Guernsey formed the Reekers in late 1963 with his brother John Guernsey and friends from Garrett Park, MD, a small town outside of Bethesda and a short distance from Washington D.C. Bass players and drummers would change over time, but the core of the band was always Tom Guernsey on guitar, Joe Triplett on vocals and Mike Henley on piano.
While playing the beach resorts at Ocean City in the summer of ’64, rich friend Toby Mason became interested in the band and offered to pay for studio session time. The Reekers first session didn’t go well, but then they went into Edgewood Recording Studio on K Street in downtown D.C. Engineer and owner Ed Green asked Tom whether they wanted to record in one track or two. When Tom asked what was the difference, Green said one track is $10 an hour, two would be $20 an hour! The Reekers went with one track, no overdubs, to record two original instrumentals that would make Link Wray proud.
Tom’s lead guitar and Joe Triplett’s screams combine with Jim Daniels’ ferocious take on surf drumming for “Don’t Call Me Fly Face” (named for the Dick Tracy villian). On “Grindin'”, Richard Solo makes incredible bass runs behind a bluesy guitar workout from Tom, accompanied by Henley’s keyboards and Triplett’s interjections (‘keep grindin’, ‘look good to me now’, ‘keep walkin’ boy’!)
Tom brought an acetate of the session to Lillian Claiborne, a legendary D.C. record producer. Claiborne had been Patsy Cline’s manager early on in her career, and was responsible for recording and supporting many local acts, especially soul and r&b artists. She released some records on her own DC label and leased other masters to labels around the country.
Claiborne signed Tom to a production contract and sent the Reekers to Rufus Mitchell, owner of Baltimore’s Ru-Jac Records, a label usually known for soul music. With Claiborne’s assurance of airplay on WWDC, Mitchell released the Reekers 45. The small first pressing lists Tom as sole writer of both songs. When that sold out, Ru-Jac ran a second press, this time correcting the songwriting credits on “Grindin'” to give John Guernsey co-credit.
Reekers Ru-Jac 45 Don't Call Me FlyfaceThe Reekers never saw any money from this record, but it garnered them some attention. Local teen maven Ronnie Oberman profiled the band in the Washington Evening Star on April 17, 1965. About this time they went back to Edgewood to record a beautiful ballad, “The Girl Who Faded Away”. For this session Mike Griffin played bass and Bob Berberich replaced Daniels on the drums. This song shows some considerable development in the band, from Tom Guernsey’s songwriting to the harmony vocals and the band’s delicate handling of the arrangement. The band took a demo to the WWDC program director who had pushed “Flyface”. Not only did he pass on it, but his remark that they should stay an instrumental band disappointed vocalist Joe Triplett.
For his next song, Tom worked out a riff on piano loosely based on an instrumental he heard on the radio. The song he wrote around that riff, “What a Girl Can’t Do”, would change the fortunes of him and the rest of the Reekers.
The band went to Rodel Studio in Georgetown, a larger studio than Edgewood, but with a less competent staff. By sheer accident the engineer captured an echo-laden drum sound that gave the song an instant hook. Tom took all but two strings off his guitar so he could play the riff cleanly. Joe Triplett delivered the lyrics with sneering satisfaction, his voice perfectly suited to the lyrics. Though the words were a Stones-like put-down, musically the song shows little influence of the British Invasion. This was the first time the band had tried overdubs, including Joe on the harmonica solo and Tom’s repeating high guitar notes that take the song out.
Guernsey received some instant feedback on whether this song had a chance at a hit: Mike Griffin, hired as bass player for the session, had been offered either $20 or a percentage of the record. Initially he wanted the $20, but on hearing the playback in the studio he changed his mind and asked for the percentage!
Just as the Reekers were getting attention around DC with “Don’t Call Me Flyface”, the band dispersed, with Mike Henley and Joe Triplett going away to college. Tom and Bob Berberich joined another band, the Hangmen, with bassist Mike West and rhythm guitarist George Daly, fellow students at Montgomery Junior College.
Fate would strike in the early summer of ’65, when Hangmen manager Larry Sealfon played “What a Girl Can’t Do” for Fred Foster of Monument Records. Lillian Claiborne graciously released Tom from his contract with her and Foster signed him – only Tom as he was the songwriter and leader of the Reekers. Since Joe Triplett and Mike Henley were committed to college, Tom decided, against his own preferences, to work with the Hangmen as his band. Monument then released the Reekers’ recording of “What a Girl Can’t Do” under the Hangmen’s name, even though the only Hangmen that had played on it were Tom and Bob Berberich.
Some sources report that the Hangmen rerecorded the “The Girl Who Faded Away” for the Monument 45. A close listen shows that the Hangmen’s Monument 45 version uses the same instrumental backing as the Reekers’ original Edgewood acetate. The vocal track does not match the demo, with different lyrics, but the lead vocalist is the same (Triplett I think). The acetate also runs about 24 seconds longer than the Monument 45.

Confusion also exists about “What A Girl Can’t Do”, but there should be no doubt, the Monument 45 version released under the Hangmen’s name is actually the Reekers. In 1966 the Hangmen recorded their own version of the song for their LP, which sounds very different.

Though the Hangmen spelled the end of the Reekers, Tom now considers a number of his later projects with Joe Triplet (and often with Mike Henley, Sam Goodall and Bob Berberich) to be extensions of the Reekers, including a 45 released as the Omegas, and later recordings like 1972’s “Night Time of My Lifetime” and “Streakin’ U.S.A.”.Bob Berberich stayed with the Hangmen after Guernsey left the group, and would go on to join Dolphin with George Daly and Paul Dowell of the Hangmen and Nils Lofgrin, and then join Lofgrin’s own group, Grin.
Joe Triplett and Mike Henley joined a group called Claude Jones, John Guernsey joined the group soon after and became one of their primary songwriters. Joe Triplett later formed the Rosslyn Mountain Boys.

Meet The Reekers, a 20-track CD including the originals of Don’t Call Me Flyface and Grindin’, the Omegas’ I Can’t Believe and five ccver versions of What a Girl Can’t Do, is available at CD Baby, which also has Tom’s instrumental album, Same Place, Different Time. 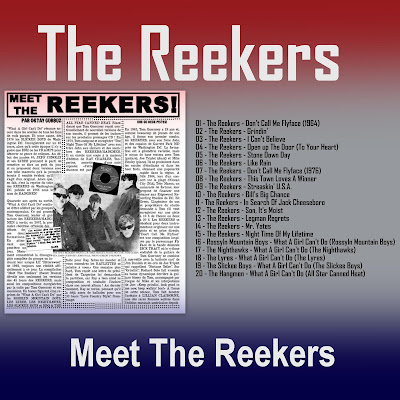