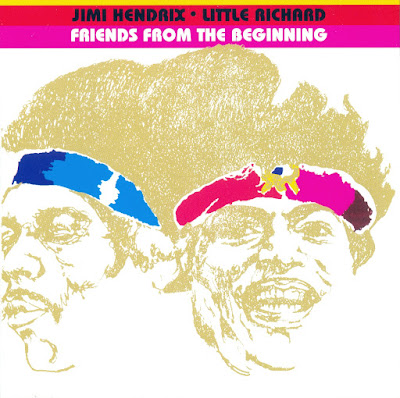 There are only two instances of Jimi Hendrix performing with Little Richard known to exist on tape. There's the Vee Jay single "I Don't What You Got, .Pts. 1 & 2" produced by Bumps Blackwell, and a live performance at Revere Beach, MA, of Little Richard in concert with Jimi Hendrix on guitar, recorded by the legendary mastering engineer and disc jockey "Little" Walter DeVenne. According to very reputable sources, this Alfa release, Friends from the Beginning, is totally bogus. There's Aki Tomita's illustrations of Hendrix and Penniman on the front and back cover, there are ridiculous liner notes that are almost as absurd as the ones producer Johnny Brantley etched on the back of Jimi Hendrix and Lonnie Youngblood: Two Great Experiences Together (an album reportedly containing a couple of actual songs with Hendrix and tracks that feature a Hendrix sound-alike to fill out the disc), and there's the music. The album claims to be produced by Bumps Blackwell and Little Richard, but most likely is not. The version of "Tutti Frutti" which ends side one sounds like a simple guitar lesson being played over a quick studio session with vintage '60s ambience. Where a true "bootleg" album contains rare performances that fans treasure and a "counterfeit" is usually an identical reproduction of a legit album by unscrupulous individuals, fraudulent recordings like Friends from the Beginning serve no purpose but to confuse the public and harm the reputations of the artists whose names appear on these travesties. It is a deception. There is no Jimi Hendrix on this record. This album says it is a 1972 release, and it actually credits most of the songwriting to Little Richard and Jimi Hendrix. This is of value to fans only as a bizarre artifact from an industry where the artist and the public are both being cheated. Author John McDermott from the official Experience Hendrix company has written Hendrix: Setting the Record Straight on Warner Books to help clear situations like this up. Such a book is very necessary for an artist whose catalog is rife with items like Friends from the Beginning; it is suggested you spend your money on the book rather than this pathetic album. 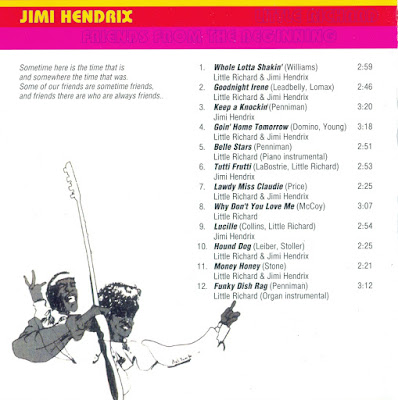