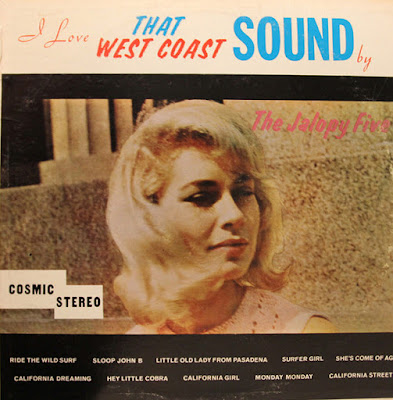 "The Jalopy Five was a Nashville-based studio band, active during the mid to late 1960's.

The story of the Jalopy Five is perhaps the most confusing of all of the surf/hot rod articles .
The reason for this would be the constant change of sessionists and genres the group underwent.
Of course, the 'Hit/Modern Sound' record label was set on one thing - to rush out as many budget albums as possile to cash in on a current fad. In fact, the 'Jalopy Five' name was used well into the late sixties, long after the surfing craze had died. You can find them doing anything from Folk music to the Beatles material!
Prior to 'I Love That West Coast Sound,' the five peice session band had released two albums:
'Surfin and Draggin' - 1964
'Surfin and Draggin Volume 2' - 1965
...both unleashed during the fall of the Surfing craze.
By the time 1966 had rolled around, it was appearent that the genre had been replaced by the British Invasion and more Folky type stuff - the Beach Boys had given in to the pressure and abandoned surfing long before '66.
So, why release something at such a late point in time, you ask.
In truth, I'm not quite sure - perhaps it was because the executives at Modern Sound thought it would still be profitable to hand out one final album dedicated to a long lost fad. After all, 'I Love That West Coast Sound' was comprised of nothing new; all the tracks had previously been pressed onto the 'Surfin and Draggin' anthology series.
Anyways, when reaching a verdict on these low budget albums, one must be open to give some slack to the producers and singers - so I'll leave the final adjucation up to you...." 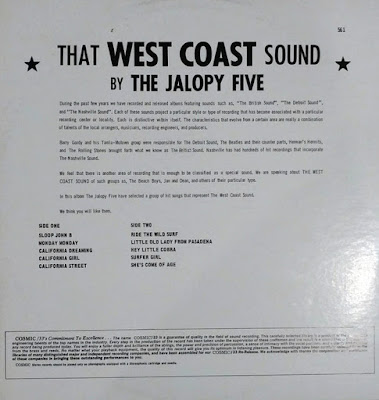