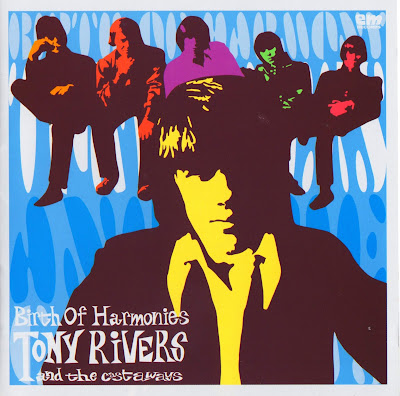 Tony Rivers and the Castaways started life as the Cutaways in Dagenham, Essex, approximately 1960. The early line-up was, Vic Larkins & Micky Johnson, gtrs, Ray Brown, bass, and Brian 'Shirt' Talbot on drums. Lead singer at one time, was Bobby Rio, (who later went on to record with Joe Meek). I became lead singer at the end of 1961, having been approached by Ray Brown, and other members of the group, who had been watching me get up to sing with a group at the Cherry Tree pub in Dagenham on a Sunday lunchtime. I’d never been in a group at that time, but I had met the lead singer whilst I was working at Butlins’ Holiday Camp in Clacton. He was on holiday with 'Terry Venables' (who one day would become the England Football manager), he told me that he sang in a group (Joe & the Teens) that played every Sunday lunchtime, at a pub in Dagenham, and when I finished the Butlins’ season, I should go and see them play, which I did. I'd get up and sing two songs, while he walked round the pub with a pint glass, collecting money for the group! Ray Brown asked me if I fancied singing with his group, ‘the Cutaways’ at the Royal Oak pub that night, I said yes, and although there were more people on stage, than in the audience, I enjoyed it enough to say yes again, when they asked if I'd like to join the group. This was probably the first real step I'd taken on the road to being a 'singer'!! I'd taken a couple of small steps during my time at Butlins’, like the occasional 'guest spot' with the Terry Young Six, who played the Rock' n 'Calypso ballroom every night. This was a very good group with some members who went on to better things later, such as, John Rostill, who, not too long after, joined the Shadows and had many hits with them, and even went on to write BIG HITS for artists like, Olivia Newton John, and a certain Elvis Presley. This was also my first meeting with Bruce Baxter, lead guitar, playing all those James Burton 'licks', and who I was to work with many times in the 70's. I also made an appearance at a dance hall in Clacton. My friend, Jock Smith and I had gone to see a group called Dave Curtis and the Tremors (a good 60's name) and I said I'd like to get up and sing with them. Now I needed a name. Tony Thompson was, and is my real name, but that didn't sound cool enough for rock'n'roll. I ended up with the name Rivers. We took this from a Decca records chart that was on the wall. No.6 was Pat Boone’s 'Moody River'. That's how I got the name. I was introduced on stage later, "All the way from London -Tony Rivers"! So now I’m in Tony Rivers and the Cutaways, playing pubs and clubs etc. Every now and then though, we'd play a lunchtime session at the Merry Fiddlers pub, pack our equipment into our van, and head off to the Granada Theatre at East Ham or Walthamstow to play between the films! I'd seen Buddy Holly with the Crickets, on both these stages, this was big stuff! Clem Cattini was always on these gigs, playing drums, with Roger LaVern on organ, us on one side of the stage, another band on the other side, Clem and Roger in the middle, half of the Tornadoes to be!! We'd all play alternately! Bizarre! It could never happen these days, but then, anything was possible. Many years later, Clem, who had now, become a top session drummer, and I, would be working together on several different things i.e. when I became a producer at CBS records in the early 70's, he was one of the CBS 'mafia', and was one of the musicians Mike Smith, head of A/R told me I had to book for the sessions. No wonder all those CBS records sounded the same! A few years after that, we recorded together again, with Cliff Richard, on ‘Devil Woman’ and other hits, and even ended up in Cliffs' band together, for a while.

The Castaways first manager was a great fellow called Benny Cooper, a former drummer with the ‘Squadronnaires’. He made sure we acted professionally and rehearsed hard (wife Joyce keeping us supplied with tea and coffee), these were good lessons to learn and stayed with me. Ask any of the Castaways! We turned 'professional' within 8 months of my joining the band, bought a van, painted out the words on the side ‘Passingham’s Pork Sausages’ and in claret and blue (of course) wrote Tony Rivers and the Castaways! Our first trip in the van was, our first 'tour of Scotland'. The trouble was, after about a couple of miles of leaving home, the boys in the back were hammering on the sides to stop. We hadn't realised that it was a sealed unit when the doors closed! No one could breathe. We had to break a tiny window in the rear door to let air in. We'd only gone up the road and Scotland seemed a long way off. We didn't even know where it was! Great days! Terry Oates became our manager around this time and got us our first ‘recording tests’ at Decca, and then EMI.

The line-up for the recording tests was, Ray Brown, Vic Larkins, ‘Shirt’, Mickey Johnson and me on lead vocals, in other words, TR & the Cutaways. We recorded two tunes, one was, the Ricky Nelson version of 'Summertime' and the other was, 'Peter Gunn'. I found out later that Terry Oates wanted us to be an instrumental group, like the Shadows! Where would that have left me? I've never let him forget that! I think it was Terry who suggested we change our name to the Castaways, which sounded better with Tony Rivers, (not that you'd get shipwrecked up a river, would you?) It seemed to work. We must have passed the 'test' and were given a recording date in Abbey Rd Studios, and told which songs our A&R manager (John Burgess) had found for us to record, we rehearsed 'til we knew them backwards, then---- Abbey Rd!! Not that Abbey Rd studio’s in those days, had the reputation that it was to gain from the phonomenal success of ‘The Beatles’, but for us, a daunting prospect nevertheless. 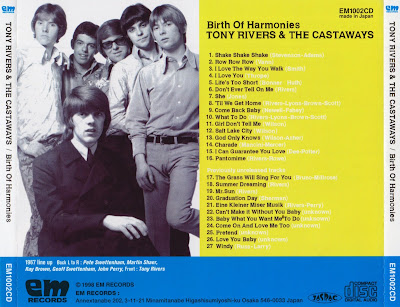 Thanks Cor for this.