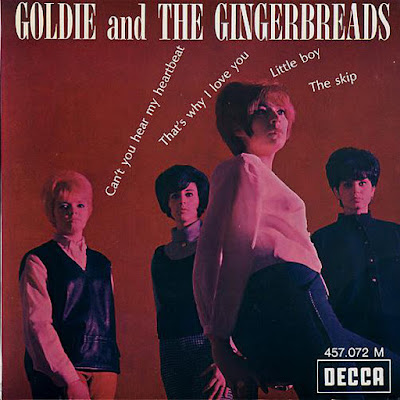 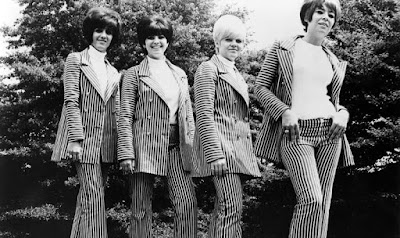 Goldie & the Gingerbreads were formed in 1962 by Ginger Bianco, Margo Lewis and Goldie Zelkowitz. After a 1962 tour with Chubby Checker they added guitarist/singer Carol MacDonald. They were the first all-female band to sign to a major label, first to Decca in 1963 and then Atlantic in 1964. Their single, "Can't You Hear My Heartbeat," reached #25 in the UK. They recorded seven other singles through 1967 before breaking up. Goldie Zelkowitz became later known as Genya Ravan and sang in Ten Wheel Drive and made several solo albums.

Goldie & the Gingerbreads are one of those acts that seem to turn up in the background of a lot of images, biographies, and reminiscences associated with the top British bands of the mid-'60s. Despite a great name, a unique image and lineup, and an enviable array of endorsements by some of the biggest recording stars of their era, however, they never made a lasting impression on the charts. Polish-born Goldie had previously been with an outfit called the Escorts (variously billed as Goldie & the Escorts and the Escorts With Goldie), who had cut a few singles for the Coral label in 1962, one of which ("Somewhere") charted high in a few locales without ever making a national impact. In 1964, Goldie & the Gingerbreads came together, featuring, in addition to the singer, Ginger Bianco on drums, Carol MacDonald, and organist Margo Crocitto (who later became known as Margo Lewis). They made their debut at New York's Peppermint Lounge, and as an all-female group who was also a self-contained instrumental unit, they were unusual enough to attract attention. Ahmet Ertegun signed them to Atlantic Records, and they released a handful of singles over the next three years. As it turned out, they were also good enough in concert to gain the attention of several visiting British performers, including Alan Price of the Animals -- who was reportedly overwhelmed by Crocitto's keyboard work -- and his manager, Mike Jeffries, who saw the quartet playing at a club called the Wagonwheel. Goldie & the Gingerbreads said yes to Jeffries' offer to manage them and the next thing they knew, they were on their way to England. Once there, they found themselves cast in the role of a novelty act. There had been all-female bands in England before, most notably the Liverbirds, but Goldie & the Gingerbreads were different in that they were American and they were a good deal more than just competent, at least on-stage. Even after the initial novelty was past, they were seen by Keith Richards, who helped get them booked as an opening act on a U.K. tour with the Rolling Stones in early 1965. They also got lots of gigs in and around London, including a headlining show where their opening act was the Muleskinners, an early band of future Small Faces keyboardman Ian McLagan. According to McLagan in his autobiography, All the Rage, the Gingerbreads were a delight to hear and to watch on-stage. As one who could appreciate it very keenly, he observed that their keyboard player, Margo Lewis, handled her Hammond B3 organ "like she was on fire." The group's debut English Decca single, "Can't You Hear My Heartbeat," produced by Alan Price, was a hit in England, and they toured in tandem with both the Kinks and the Jeff Beck-era Yardbirds in the spring of 1965, as well as performing in Europe on the same bill as the Hollies. They never managed to generate a major recording career out of this activity, however. Two more U.K. singles -- "That's Why I Love You" b/w "Skip" and "Sailor Boy" b/w "Please Please" -- followed that year, and Atlantic kept putting records out in the United States, but the esteem in which the group was held by the likes of the Rolling Stones never translated into popular appeal. They lasted together long enough to turn up on one of the posters seen adorning the walls outside the club that David Hemmings appears at in Blow Up, but, sadly, that was probably their most lasting direct impact on popular culture. On an indirect basis, however, Goldie & the Gingerbreads were the model for such acts as the Runaways, the Bangles, and the Pandoras. In October of 1965, Goldie split from the group to go solo, billed simply as Goldie. Her association with the Rolling Stones led her to Andrew Loog Oldham's Immediate Records, where she recorded Carole King's "Goin' Back" soon after; the March 1966 single, however, had to be withdrawn over some changes that the artists had made in the words. The group next jumped to Fontana Records, the U.K. pop arm of Philips Records, for one single, "I Do" b/w "Think About the Good Times," that never charted. Goldie later changed her name to Genya Ravan and turned up at the end of the '60s as a member of the jazz-rock oriented Ten Wheel Drive, and subsequently recorded an album entitled Goldie Zelkowitz for the Janus label in 1974. It was as Genya Ravan that she achieved some measure of stardom more than a decade after her time with the Gingerbreads, producing the first album by the Dead Boys and cutting her own solo albums in the company of Lou Reed, Ian Hunter, and Mick Ronson. The Gingerbreads' organist, Margo Lewis, went on to a career in music in her own right as well and their drummer, Ginger Bianco, founded the all-female horn band Isis. 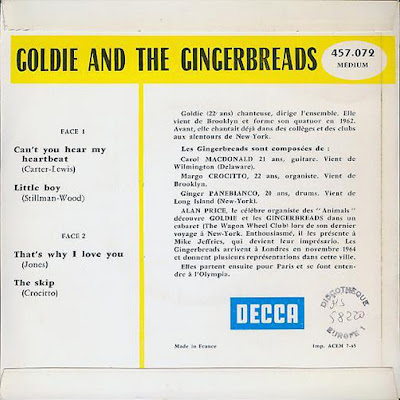 tags Goldie And The Gingerbreads ‎–