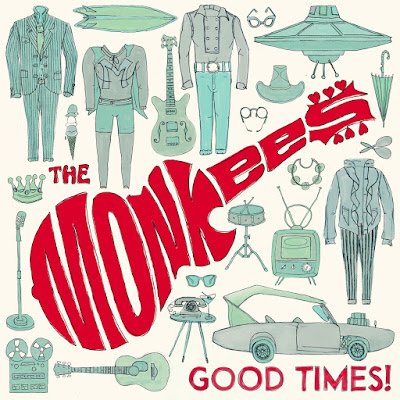 Designed as a celebration of the Monkees' 50th anniversary, Good Times! certainly is a joyous revival of the cheerful jangle that characterized the group's big '60s hits, yet underneath the frivolity is an unspoken truth: this 2016 album is quite likely the band's last. After all, two decades passed between this and its 1996 predecessor, Justus, during which time Davy Jones died; in another twenty years, the surviving Monkees would be in their nineties, an unlikely age to rock & roll. If Good Times! is indeed a farewell, bidding adieu with a buoyant love letter to everything that made the group is a hell of a way to say goodbye. Masterminded by executive producers John Hughes and Mark Pinkus, Monkees archivist Andrew Sandoval, and producer Adam Schlesinger, Good Times! finds space for every phase the Monkees experienced in the '60s. There may not be much of the enthusiastic stomp of Headquarters -- its absence is the surest sign this album is the work of veterans -- but there's a hefty dose of the spirited singalongs that pushed the group to the top of the charts, nods to Mike Nesmith's pioneering country-rock, and a psychedelic undercurrent that flows throughout. It evokes the spirit of the old records without precisely following a blueprint even when it revives outtakes, as it does on the title track where Micky Dolenz duets with the song's departed composer Harry Nilsson, and on "Love to Love," a Neil Diamond song featuring Davy Jones on lead. Both these tunes are composed by writers heavily associated with the Monkees and they're not isolated incidents either: the producers excavate material by Tommy Boyce & Bobby Hart ("Whatever's Right"), Gerry Goffin & Carole King ("I Wasn't Born to Follow"), and Jeff Barry & Joey Levine ("Gotta Give It Time"), songs that offer a direct connection to the Monkees' prime. To this, pop stars raised on the Monkees offer sparkling made-to-order originals: Schlesinger's "Our Own World," Andy Partridge's "You Bring the Summer," and Rivers Cuomo's "She Makes Me Laugh" all showcase the group's sunny effervescence; Ben Gibbard's "Me & Magdalena" taps into the burnished Americana of the group's late-'60s work; while Noel Gallagher and Paul Weller contribute "Birth of an Accidental Hipster," a song that sits at the intersection of Head and (What's the Story) Morning Glory? Finally, each of the surviving Monkees gets his own original. Peter Tork strolls through the amiable "Little Girl" and Nesmith slides into a pretty melancholy ballad but Dolenz, working with Schlesinger, winds up capturing the spirit of the whole affair with "I Was There (And I'm Told I Had a Good Time)." Micky looks at the past not with sad reverence but with a smile, happy that he was there and happy to be able to sing about it still, and that's the vibe of Good Times!: it was a blast to live it then and it's a blast to relive those times too. 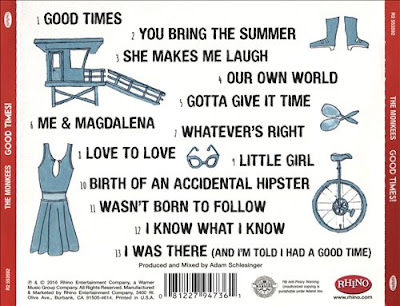