Little Phil And The Night Shadows - Patriarchs of Garage Rock 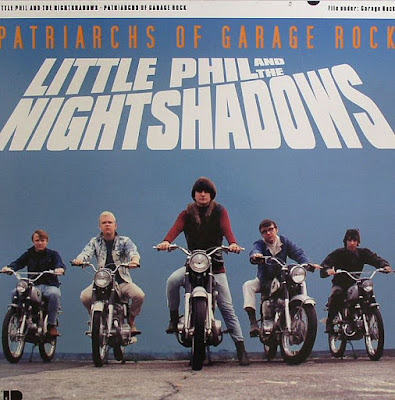 The Night Shadows were originally organized in December 1956 as The Cavaliers. The spelling was changed to The Kavaliers in 1957 to avoid legal problems with another group using that name. After some personnel changes in the summer of 1959 the group became The Barons. In the fall of 1959 the lead guitarist wrote an instrumental he called Night Shadows that the bass player thought was the perfect name for their Blues group. Assuming leadership of the band and against everyone's wishes, he changed their name to The Night Shadows on their business cards and quickly booked several months of gigs to make everyone relent. He also hired a front man for the group. From the fall of 1959 through 1961 The Night Shadows were primarily a Chicago-style Blues band featuring Bobby "Bones" Jones, a rowdy harp playing, skinny James Dean look-alike. Like the old-time blues men of the past, Jones went to prison for an alleged assault on someone with a brick mason's hammer. He later lost three toes to frostbite passing out drunk in ten-degree weather on the bed of a pick-up truck. He still writes blues tunes as Sweet Papa Jones.
In 1962 the group changed to a Rhythm & Blues show band featuring Little Erv (Barocas) & Judy (Argo), an Elizabeth Taylor look-alike, as headliners. For the next two years, the group became one of the one most popular R&B bands for Southern college dances and formals since Black R&B (or "Beach) acts were considered "crude frat party bands" by snobbish southern faculty and alumni. In 1964 the English invasion changed the group's primary direction to Rock relegating R&B, now called (East Coast) Beach Music to secondary importance. Little Erv quit the music business to get married and Judy Argo became a jazz diva appearing on NBC's Tonight Show before a purported suicide attempt in New York derailed her career.
When14-year old Little Phil (Rosenberg) was picked as their replacement to front the group, the other band members thought their leader "had lost it" since they were all in their early twenties. Over their protests of playing "nursemaid to a snot-nosed kid", he knew that Little Phil could do "James Brown type" choreography as well as sing Rock, Blues and Soul songs. His gamble paid off, and 1965 turned into a watershed year for the Night Shadows. Johnny Brooks, a studio engineer and producer Janoulis had worked with on sessions since 1959, had opened his own recording facility and was seeking artists with original material. This gave the group an opportunity to record both the tunes Little Phil had collaborated on and some others that Janoulis had written. The end result was a label deal with Dot Records, a very successful record company owned by Paramount Pictures in Hollywood, California. The single "So Much" featured Little Phil as lead singer. The other band members were Jimmy Callaway (guitar), Bobby Newell (organ), Charles Spinks (drums) and Aleck Janoulis (bass). Everything seemed to be going their way until the "conflict" in Viet Nam suddenly escalated into "war" and all able-bodied, single men between the ages of 18 to 26 were made eligible for the draft. Little Phil was still in high school and Janoulis, Spinks, and Newell were all in college. If the group left school permanently they would all be drafted except for Little Phil who was only 16. This prevented any extensive traveling to promote the record. As the record reached the Top Ten in three states, a corporate decision to make the record company a Country oriented label stopped all pop and rock promotion dead in its tracks. Their follow up single "60 Second Swinger" was permitted to be released on Gaye Records and featured a full color sleeve. Due to contractual obligations the group then recorded for Baja Records under the pseudonym "The Square Root of Two". This became the title of their classic 1968 psychedelic album on Spectrum Stereo which now sells for over $1200 to record collectors. Due to internal conflicts the band split up after their last concert on Memorial Day in 1969. Teen-age guitar prodigy, Barry Bailey, performed with the group in their final months (Ref: "Live At The Spot") and later went on to form the hit-making Atlanta Rhythm Section. Janoulis formed the group Starfoxx in 1974 that had a nationally charted hit "Disco Rock" in 1977 and, as Big Al Jano, released the anti-AIDS cult single, "The Condom Man", in 1987, based on the Night Shadows 1961 blues single, "The Garbage Man". Little Phil was lead singer for Kudzu and Bandit in the 1970's and has recently been recording some new material in the studio. 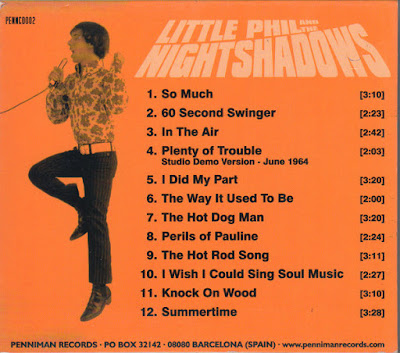