VA - Give the People What We Want: Songs of the Kinks 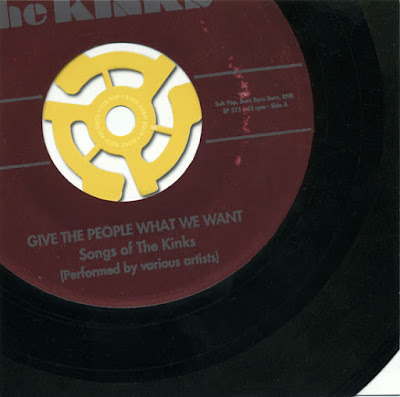 Who'd have thought when the "tribute LP" plague began in the late '80s, we'd be still be stuck with it in 2001, and that the same artists would be feted? (The Damned have four tribute LPs now! Yawn!) Indeed, 1989's Shangri-La: A Tribute to the Kinks was one of the earliest and best. It was the brainchild of Imaginary, the cool and tiny Manchester indie, that pioneered the once-fresh idea with ones for Syd Barrett, Captain Beefheart, and the Byrds. But if, like pop movies, sequels are inevitable, this is one of those rare cases where the second time is best. Shifting from Shangri-La's reliance on '80s U.K. '60s fetishists, Give the People collects garage/punk/indie Northwestern American greats who worship at Ray Davies' altar like the rest of us. And with the exception of the Briefs' pointless thrash through 1983's charming comeback number six hit, "Come Dancing," the 18 others take on the truly genius Kinks, the staggering Kinks to Muswell Hillbillies 1964-1971 work, the hottest seven-year run outside of the Beatles in rock history -- before the group and their contemporaries slowly slid into protracted mediocrity. These selections show terrific taste, as the hits and obvious choices are passed up for one stupendous, obscure LP track after another, aside from the indelible 1967 U.K. number two "Waterloo Sunset" (done with typical sweetness by the Fastbacks), and the 1966 number 14 smash "Sunny Afternoon" (Baby Gramps). Best of all, 17 out of 19 score for excellent versions. (The opening, turgid version of 1964's "Revenge" by C Average is the other lamentable stinker.) Every side of the Kinks is covered, from the prettiest (Percy gem "The Way Love Used to Be" by Heather Duby, Kontroversy's "Ring the Bells" by Model Rockets), to the hypnotic (Kinda Kinks and Rushmore film knockout "Nothin' in This World Can Stop Me Worryin' 'bout That Girl" by Mark Lanegan, Face to Face's "Fancy" by the Posies' Jon Auer), to dopey fun (Kontroversy's "Gotta Get the First Plane Home" by Young Fresh Fellows, Something Else's "Tin Soldier Man" by Love as Laughter), to awesome rock 'n' roll (Arthur's incredible "Brainwashed" by ex-Gits folks the Pinkos, and Village Green Preservation Society's equally amazing "Wicked Annabella" by the Minus Five), all done with panache to equal the deserved reverence. Wither Mudhoney, Fallouts, Makers, etc. Rarely has a tribute LP played so consistently. That the Kinks now have not one, but two of the (few) best 10 tribute LPs ever is testament to the astounding quality of Davies' pen and the vintage Kinks lineup's greatness, as well as the cream of the crop artists they still inspire, 30-37 years later. 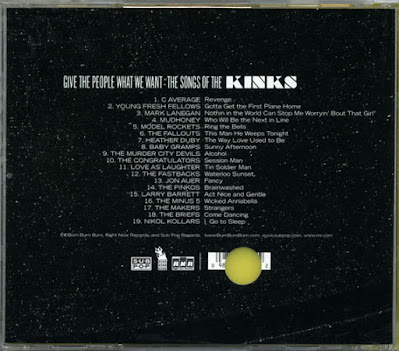