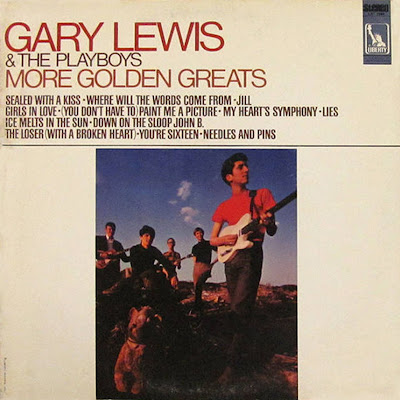 Here's the cream of the Gary Lewis crop with a little filler added, and that's the only thing that detracts from this album's greatness. Gary Lewis and his Playboys actually look like pop stars here -- better groomed than the Beach Boys. The names of Playboys bandmembers outside of the lead singer are nowhere to be found. At least when Mary Wilson, Cindy Birdsong, and Flo Ballard took a back seat to Diana Ross the whole world knew who they were. Can anyone remember bassist Al Ramsey or John West, or guitarists Dave Costell and Dave Walker? Of course not! Heck, Blues Magoos producer Dave Hassinger gets more recognition as engineer here, so do Bones Howe, Henry Lewy, Leon Russell, and Snuff Garrett, and deservedly so -- they are the real stars behind the project. But Golden Greats is littered with little pop masterpieces, the addition of five songs which no one remembers or even ever wanted to play some kind of twisted joke. By placing an absolutely dreadful "Time Stands Still" next to the sublime "Green Grass" the producers embarrass their charge. The lords giveth and the lords clearly can take it away. This writer met the singer in 1976 and after saying hi he ran off to, in his words, "score some chicks." Sure he was being funny with the "Playboy" image, but it came off as tacky, like the B-sides which really throw this album's momentum. "I Won't Make That Mistake Again" is the most successful of the non-hits, but even it pales next to majestic essays like "Count Me In," "She's Just My Style," "Everybody Loves a Clown," "Green Grass," and "This Diamond Ring." By building impeccable sounds around a voice with such little distinction, Leon Russell and Snuff Garrett provide evidence of their genius which simply cannot be argued with. Play the difficult Beach Boys rip that is "Little Miss Go Go" next to Lou Reed's surf classic "Cycle Annie" to get an idea how a major personality can get the point across despite vocal limitations. You'll see why Reed is a bigger star with one Top 40 hit than a man who got a dozen or so gift wrapped and handed to him. Gary Lewis is forgiven, though, because the high points here are exquisite memories and he is the guy who helped provide them. 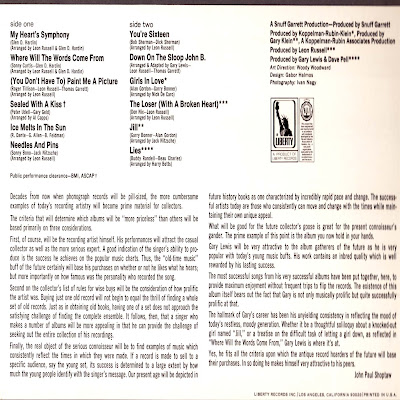