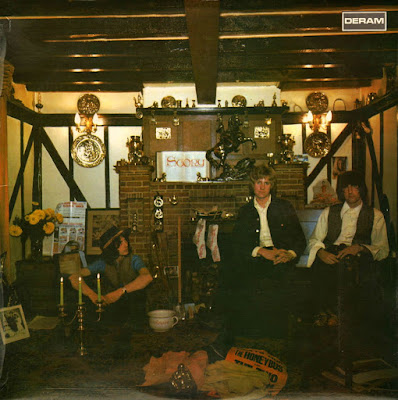 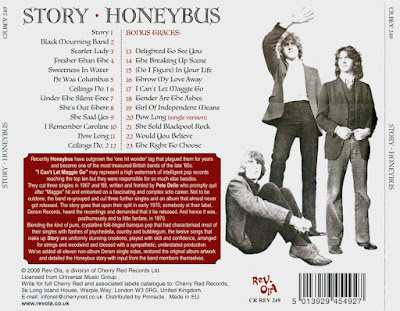 - Ray Cane (Raymond Byart) - lead vocals (01,02,04-06,09,12), guitar, piano, mellotron, bass, arranger (01-12)
- Jim Kelly - lead vocals (07,11), lead guitar
- Colin Hare (Colin Nicholas Nicol) - lead vocals (03,08,10), bass
+
- Pete Kircher - drums (01-12)
- Lloyd Courtenay - drums (01-12)
- Pete Dello (Peter Blumsom) - vocals, keyboards, guitar (13-20)
- Ivor Raymonde - producer (01-12)
Honeybus' sole album was recorded in 1969 and released in early 1970, by which time "I Can't Let Maggie Go" was fading from the memory of the British public, original leader Pete Dello was long gone, and the band itself had been inactive for months. It's therefore not entirely representative of what the group was about. Honeybus did show themselves to be one of the few bands that could emulate the lighter and quieter sides of the 1968-1969 Beatles with a degree of competence, although as is usual when the Beatles were imitated, the songs and execution were much more lightweight than what the Beatles themselves recorded. At times it sounds like Badfinger without the muscle or occasional outstanding songs that made Badfinger recall the Beatles without sounding like tepid wannabes. The Beatlesque harmonies are nice and the lyrics sometimes clever, and the arrangements are tasteful, sometimes employing substantial traces of country music and subtle orchestration. All of the songs are available on the 25-song compilation At Their Best (which also includes a B-side recorded around the same time, "The Right to Choose"), which is a far better alternative than finding a copy of the original album.
***
Posted by: D&J на 17:33