Brian Poole & The Tremeloes -Twist And Shout & It's About Time... 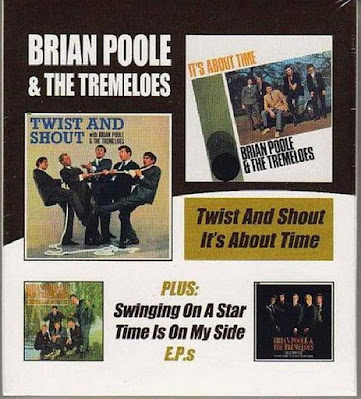 Рок-энциклопедия. Tremeloes
The  Tremeloes — Вікіпедія
The Tremeloes - Wikipedia
The Tremeloes - English page
***********
Brian Poole - vocals (born November 2nd 1941, Barking)
Ricky West - lead guitar (born Richard Westwood, May 7th 1943, Dagenham)
Alan Blakely - rhythm guitar (born April 1st 1942, Bromley)
Alan Howard - bass guitar (born October 17th 1941, Dagenham)
Dave Munden - drums (born December 12th 1943, Dagenham)
Brian Poole founded the group in 1959 in Dagenham, Essex.
******
They began their career as Buddy Holly mimics, Poole going so far as to wear spectacles of the type worn by Holly.
The band built up a following playing at US airbases and dancehalls. Their first big break came in '61 when they turned professional and were booked by the BBC for the popular radio show "Saturday Club" that summer. That appearance led to them becoming regulars on radio. Towards the end of that year, they were offered an audition by Decca. The audition was held on New Year's Day 1962. The producer of the session was informed that he could sign one of the two groups who were vying for a contract that day. He chose Brian Poole & The Tremeloes. The band to miss out was The Beatles.
They scored several hit records between 1963 and 1965, beginning with a cover of The Isley Brothers' "Twist And Shout", which, ironically, had also been covered by The Beatles on their debut album. This was followed with another "dance" song, a version of The Contours' "Do You Love Me", which went to the top of the charts and outsold a rival version by the Dave Clark Five. Other notable covers included Roy Orbison's "Candy Man"and the Strangeloves' "I Want Candy".
After the hits dried up Poole left in 1966 for a solo career which was to prove unsuccessful and he soon retired to work in the family's butcher business.
Contrary to expectations, The Tremeloes prospered without him and carried on making successful records until 1971.
Brian Poole And The Tremeloes
BRIAN POOLE & THE TREMELOES
The Tremeloes
Biographyby Bruce Eder

It's difficult for anyone who has heard them not to like the Tremeloes. They were one of the more prodigiously talented British pop/rock bands of the '60s, and they threw that talent into making amazingly catchy, well-crafted singles that lit up the charts on both sides of the Atlantic from 1966 through 1970. The band first got together in 1958, with a lineup that included singer Brian Poole and Alan Blakely, who started on drums but switched to guitar after drummer/singer Dave Munden joined.

The band built up a following at local dances and clubs, and on the U.S. air base circuit, and by 1961, they had turned professional. Soon after, Rick West, who had previously played with Tony Rivers & the Castaways — and who was classically trained — joined on guitar. They played an audition for Decca Records on New Year's Day 1962, competing with an unknown quartet from Liverpool called the Beatles. Decca chose the Tremeloes, based on the fact that they were from London and, thus, would be more accessible.

They were signed as Brian Poole & the Tremeloes, and it was under that name that they issued several failed singles. Then the group grew their hair longer and pumped up their rhythm guitar sound, and their version of "Twist and Shout," done in that style, reached number four on the English charts. Their next record, a cover of the Contours' "Do You Love Me," was an honest, authentic-sounding screamer of a single that hit number one in England. The band enjoyed a series of hits over the next two years, including a raucous rendition of the Strangeloves' "I Want Candy."

Poole was the center of attention and eventually developed a star mentality. He became convinced that his future was as a pop vocalist, in the manner of such up-and-coming figures as Tom Jones, and by the end of 1965, a split was in the works. The consensus in the music press was that Poole was poised for stardom, while the Tremeloes were headed for oblivion.

Instead, Poole disappeared after a series of failed singles, while the Tremeloes continued, following another membership change — Chip Hawkes (bass, vocals), Dave Munden (drums, vocals), Alan Blakely (guitar), and Rick West (guitar, vocals) became the definitive Tremeloes lineup. Newly signed to CBS Records, they grabbed the Beatles' "Good Day Sunshine" as their next single. The Tremeloes' version never charted, but it re-established them with its heavy airplay and good reviews, and got them onto television. It was their follow-up, "Here Comes My Baby," written by Cat Stevens, that put them back on top. An infectiously tuneful, upbeat song, with superb vocals and solid playing, it became a number four hit in England and reached number 13 in America. "Silence Is Golden" became their first chart-topper in England in three years, as well as their second U.S. gold record. The next three years saw them move from success to success in England and around the world, with another three singles in the U.K. Top Ten and two more in the Top 40.

And then, in 1970, it all ended, in a series of career-killing errors. It started innocuously enough — the members, apparently tired of being treated as a soft pop band, decided to change their image. They spent a year preparing an album entitled Master, that was intended to prove they could do serious songs. The fatal error occurred when the group publicly disparaged their past hits and dismissed the listeners they had attracted as "morons," alienating their fans and any representative of the music press who had previously been in their corner. And Master was a commercial and critical flop.

They tried everything to recover — sounding heavy, going country, spoofing glam rock, and even changing their name to the Trems, without regaining their career momentum, and by the mid-'70s, they were playing in cabaret. In the late '90s, Munden and West were still leading a version of the Tremeloes, with keyboardist/singer Joe Gillingham and bassist/guitarist/singer Davey Freyer, playing regular gigs in England and Europe. And their mid- to late-'60s material was still being reissued in profusion on CD into the 21st century, and still delighting listeners. 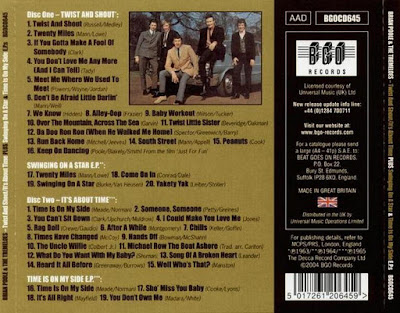