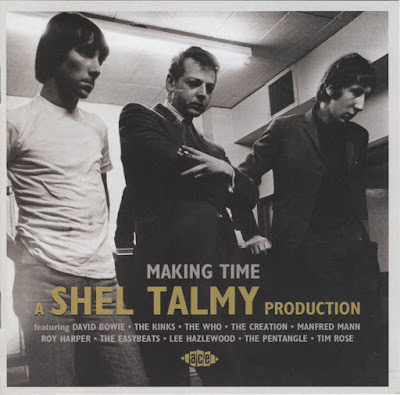 " The name Shel Talmy needs no introduction to any student of 1960s rock. In the roll-call of top producers of the era, he is foremost, an American ex-pat who almost single-handedly changed the sound of British rock'n'roll. Based upon his supervision of the early Kinks and Who alone, Talmy upped the ante and in the process forged a sonic template that would have worldwide reverberations. This is the first significant overview of this maverick's 1960s career. Talmy trained as an engineer in Hollywood, but when on holiday in the UK in 1962, boldly marched into Decca Records and announced his availability as producer. Early hits with the Bachelors and the Fortunes led to a reputation for handling the new wave of beat and mod outfits that erupted in the wake of the Beatles. He enjoyed his greatest success with the Kinks, Who and Easybeats, but could create a hit for just about anyone, from the breezy style of Chad & Jeremy or the soulful pop of Manfred Mann and Amen Corner to the acoustic-based Pentangle. Talmy s prolific schedule meant a proportion of his productions fell by the wayside, but many have subsequently become cherished items. As heard here, they range from future stars David Bowie and Lemmy (with the Rockin' Vickers) to cult faves the Untamed, Oliver Norman, First Gear and Mickey Finn, along with the acts on Talmy's own Planet Records, including pop-art avatars the Creation. Shel's girls are represented by the collectable Perpetual Langley and Goldie and the Gingerbreads, while his work with Lee Hazlewood and Roy Harper demonstrates the breadth of his abilities. Finally, along with the freakbeat classic Bald Headed Woman. Trini Lopez's witty Sinner Not A Saint (the only non-Talmy production here) is included as an example of his songwriting prowess. Making Time A Shel Talmy Production also benefits from unprecedented access to Talmy s personal vaults, which yielded master tapes for many obscurities as well as several ear-popping unissued tracks. Extensively researched and copiously illustrated, this anthology will be a significant entry in Ace's acclaimed Producer series. " 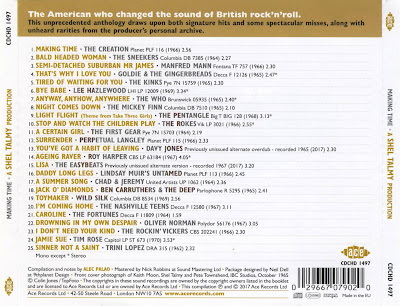