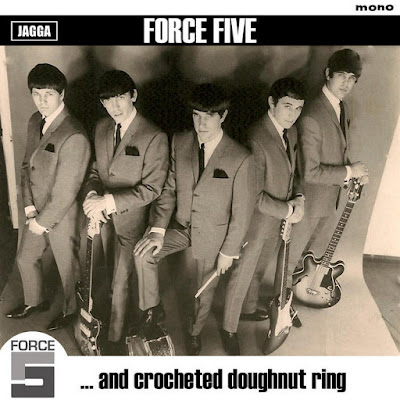 50 years ago a band called River approached Decca Records for a record contract. They were turned down.It was the end of a five year journey
for a group of musicians who in their travels pretty much encapsulated the British pop music scene of the swinging sixties from start to end.
The Band River were formed out of the remnants of the more memorable (not just for the name) band, the Crocheted Doughnut Ring
(or Doughnut Ring for short). Given their history and output, which from its first beginnings with the Essex beat band
'Force Five', had provided much great content for many British sixties Beat, Mod and Psychedelic compilations, it is remarkable that
there has never been a definitive collection bringing together all of their works, particularly as the Doughnut Ring and the two bands
they grew out of were all produced by the same Producer. The brilliant Pete Eden
THE FORCE FIVE
The Force Five were a short-lived British pop band who released a handful of singles on the United Artists label. Band members included Ron Gent (lead vocals), Pete James (rhythm guitar), Dave Osborne (bass), Dave Scates (drums) and Bert Ash (lead guitar). They were managed by Dick Mountney.
The band’s name was derived from a casual remark made by a local club owner, who told Mountney that “Your boys blow up a storm like a gale force five wind.” 1965’s “Yea, I’m Waiting” is a great piece of garage rock and can be heard here on Psychedelicized Radio
Line Up
Ron Gent Lead Vocals
Pete James Rhythm Guitar
Dave Osborne Bass Guitar
Dave Scates Drums
Bert Ash Lead Guitar
Force Five Bio (from Force Five.info)
"Offstage, there was little to distinguish the members of the band from any other British Pop Group.
The boys all lived on Canvey Island, they had common interests; fishing and cards, and for the most part,
they grew up together, attending the same schools and gradually fell in with each other.
Disenchanted with their jobs they formed a pop group.
The name was derived from the casual remark of a local club owner who told their manager one night
"Your boys blow up a storm like a gale force five wind
And so the story of 'Force Five' Unfolds......"
Force Five tracks have surfaced on Rubble Vol. 13, Chocolate Soup For Diabetics and Beatfreak Vol. 2 amongst others
THE FINGERS
From Discogs
"The Fingers were one of the first acts to label themselves "psychedelic". Formed in the early sixties,
they even took the stage with a monkey, called Freak Out, who they claimed produced psychotic smells."
Members:
Alan Beecham - Keyboards
Mo Witham - Lead guitar/backing vocals
Dave Grout - Rhythm guitar/backing vocals
Rick Mills - Lead vocals/rhythm guitar
John Bobin - Bass guitar/backing vocals
Bob Clouter - Drums
Fingers Tracks have surfaced most recently on Fab Gear, Curiosity Shop Vol. 5. Let's Go Down & Blow Your Mind
Circus Days Vol. 2 and Psychedelia AT Abbey Road.
CROCHETED DOUGHNUT RING
Crocheted Doughnut Ring was a British psychedelic band that was formed in 1967 out of 2 other bands, Force Five and The Fingers, both of which were managed by British producer Peter Eden. Eden came up with the name after a Peter Blake pop-art collage. He also pseudonymously wrote their debut single Two Little Ladies (Azalea & Rhododendron). The line up consisted of Richard Mills (guitar, vocals), Brett Pulham (lead guitar : Sometime credit as Bert Pulham), John Chapel (keyboards), George Bird (bass), and Dave Skates (drums : Sometime credit as Dave Scates). They also released a single as Doughnut Ring.
Coming together in 1967, the band initially consisted of:
Richard Mills (guitar, vocals),
Brett Pulham (lead guitar),
John Chapel (keyboards),
George Bird (bass),
Dave Skates (drums).
“Two Ladies” was released on Polydor who rush-released the single, and as a result, neglected to sign the band to any contract.
The single lacked a B-side, so Eden took the backing track, experimented with different techniques like phasing and crossfading,
and came up with the song “Nice.” This was then presented to Polydor as the B-side for “Two Little Ladies.” The single was released in October 1967.
Pirate radio stations decided to flip the single and play “Nice” instead, however the song was deemed “too far out” to play on the newly-formed Radio One.
Peter Eden went to work for Decca’s satellite label, Deram, and he brought The Crocheted Doughnut Ring with him. Over the next year, the band issued three
more singles (one under the moniker Doughnut Ring), all of which were ignored in England. “Happy Castle” became a minor hit in Japan.
“Get Out Your Rock And Roll Shoes” can be found on the U-Spaces: Psychedelic Archaeology
https://www.discogs.com/artist/454125-Force-Five-2
https://www.discogs.com/artist/673214-The-Fingers
https://www.discogs.com/artist/629153-Crocheted-Doughnut-Ring 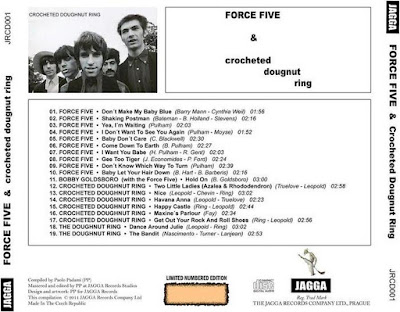