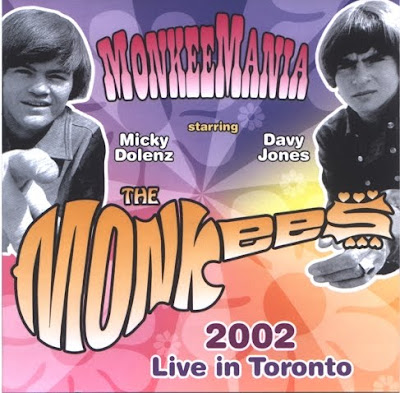 Monkees concert with Micky Dolenz and Davy Jones at Casino Rama in Toronto, Ontario, Canada January 2002.
MonkeeMania starring Micky Dolenz & Davy Jones Live in Toronto 2002
This tour saw the debut of a new live CD, "Monkee Mania 2002 Live In Toronto" that was released & sold only at concerts throughout 2002. In June, a new greatest hits CD was released as well as the start of Dolenz & Jones' "Monkee Mania 2002" North American tour from May-September.
http://www.monkeesrule43.com/00s.html 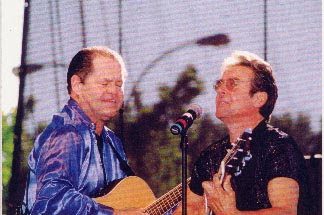 By 2000, the Monkees once again came into focus when two specials where aired about them. First “Behind The Music” on VH1 and “E! True Hollywood Story” on the E! Channel, plus a biographical movie about The Monkees titled “Daydream Believers: The Monkees Story” which also aired on VH1. Afterwards, Monkees sales on their Albums and CDs went up and soon David Fishoff who by this time had become Davy’s personal manager convinced him, Micky and Peter to go on a 35th reunion tour the following year and by March the guys toured through the spring. Soon their popularity grew as Monkeemania once again returned for the new millenium and the tour expan-ded from May onto August. A live CD “Monkees in Las Vegas” was sold at concerts that summer. However, by mid-summer Peter wanted out due to some tensions and his commitment to his own band Shoe Suede Blues but he promised to continue the tour throughout the summer. His final concert appearance was at the Sun Theatre in Anaheim, CA on August 31, 2001 which was also both filmed and recorded by King Biscuit Entertainment for a live DVD and CD. On September 2, Peter received a call from David Fishof who told him that Micky and Davy were very hurt about him leaving the tour because other projects, like a new album or CD had to be cancelled that they didn’t want him showing up for the last two concerts. Micky and Davy once again continued on as a duo as they did over three decades earlier. They toured all over throughout the fall and in March the following year the toured in Canada where a new live CD was recorded called “Monkee Mania 2002 Live In Toronto”. Late that year, they ended their tour when Davy decided not to continue so they parted possibly for the last time.