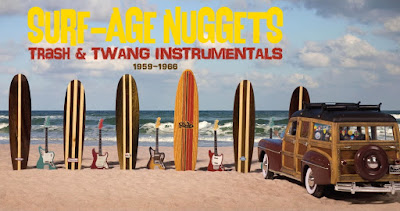 The four-disc set Surf-Age Nuggets: Trash & Twang Instrumentals 1959-1966 plays like the flip side to Rhino's classic surf music box set Cowabunga!, and for good reason: that set's co-producer, James Austin, helmed this project, and his passion and encyclopedic knowledge of surf music from its greats to its most obscure acts is a big part of what makes this collection such a thrill. Where Cowabunga! concentrated on surf's stars, Surf-Age Nuggets digs deep; for every song by Dick Dale, there are many more by lesser-known but just as devoted acts such as the Ramrods, the Telstars, the Mosriters, and the Elite U.F.O. (!). The collection also lives up to the Trash & Twang part of its name with lots of rough, raw tracks that border on proto-punk in their intensity (check out the Emotionals' down-and-dirty version of "Miserlou," the Gestics' "Rockin' Fury," or the Safaris' "Kick Out") as well as commercials and movie trailers (the ones for Vox and House on Haunted Hill are especially memorable) that reflect how big a part surf music played in pop culture at the time, and vice versa. Covering all the bases of surf music from sleek to raw and everything in between, this set is a must for anyone who wants to explore the style beyond its big names.
Tracklist 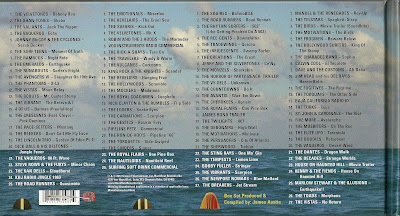