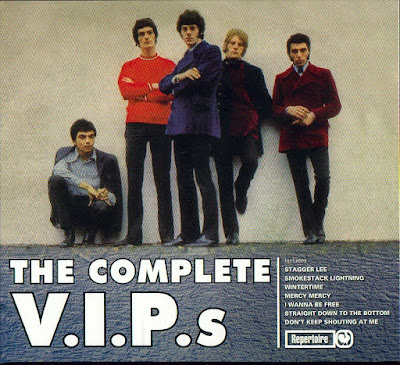 Biography by Mark Deming
The V.I.P.s were one of the leading R&B acts to emerge from the North of England in the 1960s, and while they never reached genuine stardom, several the group's members would go on to international fame after the combo broke up. Formed in 1963, the V.I.P.s hailed from Carlisle, a town in North West England not far from the Scottish border. The core members of the V.I.P.s had previously worked together in another Carlisle combo known as the Ramrods; after bassist Dave McCumiskey left the band to relocate to London, Greg Ridley took his place, joining vocalist Mike Harrison, lead guitarist Jimmy Henshaw, rhythm guitarist Frank Kenyon, and drummer Walter Johnstone. Newly christened the V.I.P.s, they became a regular attraction at the Cosmo Club in Carlisle, and in 1964 they signed a record deal with noted producer and manager Larry Page.
Page licensed the V.I.P.s' debut single ("She's So Good" b/w "Don't Keep Shouting at Me") to RCA, but the deal was a one-off and when the disc failed to chart, the group cut a 45 for CBS in the U.K. and another single that appeared only in the United States on Philips. (The group also found its name briefly changed to the Vipps, supposedly in the hope that the new brand would seem more contemporary.) The V.I.P.s left Carlisle to settle in London and were regulars on the big city's club circuit, and after they parted ways with Larry Page they signed a new deal with Island Records in 1966, who promptly issued "I Wanna Be Free" b/w "Don't Let It Go," with "Straight Down to the Bottom" b/w "In a Dream" following in 1967. The band didn't enjoy much chart success at home, but fared better in France after Fontana released three EPs there drawn from their Island recordings.
Supernatural FairytalesBy the end of 1967, Henshaw, Johnstone, and Kenyon left the V.I.P.s, and Harrison and Ridley recruited three new members -- Keith Emerson on keyboards, Luther Grosvenor on guitar, and Mike Kellie on drums. This edition proved to be short-lived, as Emerson left after a few months to join the Nice (he would go on to major stardom a few years later with Emerson, Lake & Palmer). The remaining four members continued on under the new name Art, and cut an album in 1967 called Supernatural Fairytales. The Art album was a commercial disappointment, but they belatedly found an audience in both England and America after Gary Wright joined the group and they adopted the new name Spooky Tooth. Grosvenor would later depart Spooky Tooth to join Mott the Hoople (using the new stage name Ariel Bender), Greg Ridley went on to play with Humble Pie, and Mike Harrison cut a pair of solo albums and later joined the Hamburg Blues Band. The V.I.P.s' singles and EPs were belatedly reissued in 2006 by Repertoire Records in a two-CD collection called The Complete V.I.P.s.
CD 1 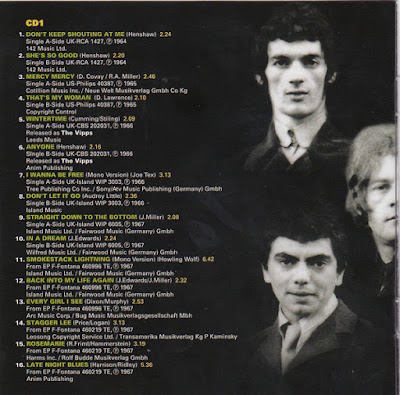 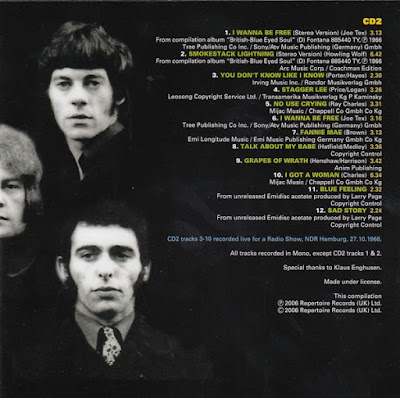 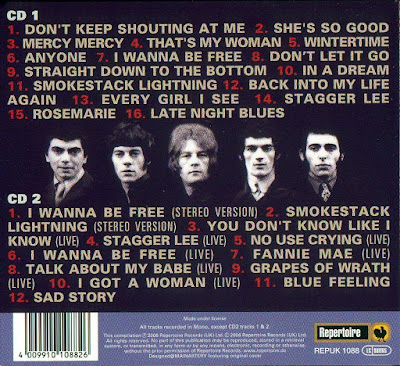 Modern mathematics isn't quite capable of counting how many R&B bands existed in Great Britain during the 1960s, but like a significant number of them, the V.I.P.s were destined to win greater recognition after they called it quits than while they were together. The final version of the V.I.P.s evolved into Spooky Tooth, who enjoyed chart success in both Europe and the United States during their late-'60s/early-'70s heyday, while guitarist Luther Grosvenor became a member of Mott the Hoople after changing his name to Ariel Bender (he also received some less than flattering reviews from several young women in the documentary Groupies, but that's another story). Given their résumé and the obscurity of their catalog, one might not expect much from The Complete V.I.P.s, but this double-disc compilation makes it clear this band was better than the average gathering of blues-wailing Brits. Lead singer Mike Harrison's voice was strong and emotive enough to carry material like "Smokestack Lightning" and "Straight Down to the Bottom" with style, guitarists Frank Kenyon and Jimmy Henshaw (the latter of whom was later replaced by Grosvenor) played with tough, no-frills menace, and bassist Alf "Greg" Ridley and drummer Walter Johnstone (later replaced by Mike Kellie) held down the rhythm with a solid, potent groove. The Complete V.I.P.s, true to its title, collects everything the band released between 1964 and 1967 -- one single each for RCA, CBS, and Phillips; two 45s for Island; two three-song EPs for French Fontana; and a pair of stereo mixes from a Fontana compilation -- along with an impressive live set recorded for German radio and two unreleased tracks. If the V.I.P.s aren't enough to make anyone forget the Yardbirds or the Pretty Things based on this material, they could certainly hold their own in a contest with most of their other contemporaries, and the segue from the frantic rocker "Rosemarie" into a jazzy take on "In the Wee Wee Hours" (here called "Late Night Blues") shows they had impressive versatility. Anyone with a taste for Anglo R&B from the classic era would do well to give this a spin.