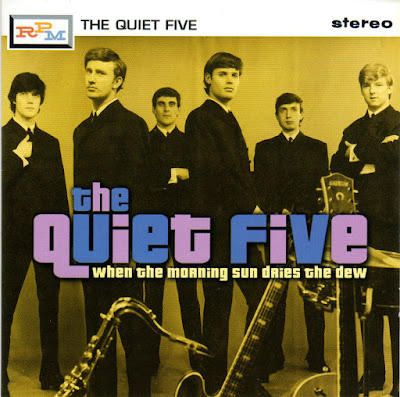 Biography by Richie Unterberger
One of the more unknown British Invasion bands of the mid-'60s to make the lower reaches of the U.K. charts, the Quiet Five released half a dozen singles in 1965-1967 (one in the U.S. only) in various styles showcasing their accomplished vocal harmonies. The best of these, their debut, "When the Morning Sun Dries the Dew," was written by guitarist/singer Kris Ife for Marianne Faithfull. While its haunting folkiness would have been appropriate for Faithfull's early approach, the Quiet Five ended up releasing it themselves, and it did nudge just inside the British Top 50. So did a subsequent cover of Simon & Garfunkel's "Homeward Bound," but that was effectively wiped out when the original version went into the U.K. Top Ten. Other singles found the group working in several formats, including rocked-up pop standards, reasonably convincing Merseybeat-influenced rock, and tunes showing the vocal harmony influence of American acts such as the Beach Boys. Perhaps, like some other such groups with accomplished and flexible vocal harmonies, they were a little too versatile. Some of their work had fleeting similarities to other pop-oriented acts of the British Invasion, such as the Fortunes, Peter & Gordon, and the Tremeloes, but they never established too strong an identity of their own. Nor, unfortunately, did they record too many of their own songs, despite the ability shown by Kris Ife on some of their tracks and some of Ife's post-Quiet Five work.

When the Morning Sun Dries the DewThe Quiet Five formed in the early '60s in London, first as the Trebletones before changing their name to the Vikings. As the Vikings, they did manage one side of a 45 single, the instrumental "Space Walk," whose title was changed to "Gemini" when it was eventually issued by Columbia. The Vikings became the Quiet Five, however, in 1964 when they became the backing band for singer Patrick Dane, replacing another group that had used the Quiet Five name. After some personnel changes, the Quiet Five split from Dane to go out on their own, signing with Parlophone, where they were produced by Ron Richards (who also handled the Hollies). As was appropriate considering that "When the Morning Sun Dries the Dew" had been penned for Marianne Faithfull, they also backed Faithfull on a 1965 EP, with Faithfull's guitarist Jon Mark also participating. Though they toured with the Beatles, the Rolling Stones, Donovan, the Byrds, and the Ronettes, the Quiet Five never had a big-selling disc. Ife left the group in 1967 to record as a solo act with MGM, and is best known for the late-'60s single on which he covered Joe South's "Hush," as this was the version that inspired the big cover hit of the same song by Deep Purple. Both sides of all six of the Quiet Five singles, along with seven previously unreleased tracks, were compiled on the 2005 CD anthology When the Morning Sun Dries the Dew. 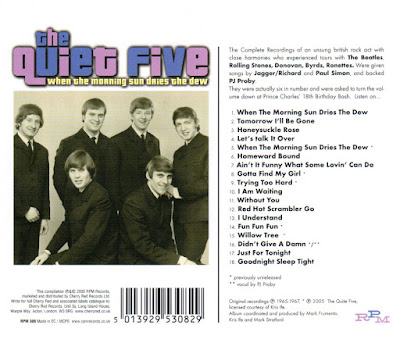 Both sides of all six of the singles issued by this obscure British band between 1965-1967 (including one released only in the U.S.) are on this compilation, which also presents seven previously unissued tracks. With their clean-cut, American-influenced vocal harmony sound, the Quiet Five weren't too comparable to many other British Invasion bands; perhaps the Fortunes and Peter & Gordon, a bit, though they were earthier than the Fortunes and not as folky as Peter & Gordon. The influences of the Beach Boys and Merseybeat are also felt to varying degrees. While the material is uneven, and isn't stunning, it's a pretty respectable slant on the more lightweight side of the mid-'60s British Invasion. Certainly their moody, folky debut single, "When the Morning Sun Dries the Dew," is a highlight, akin to Peter & Gordon in their more serious moods, making one wish Quiet Five singer/guitarist Kris Ife had penned more of the group's releases. The more energetic B-sides "Tomorrow I'll Be Gone" (a quite tough Merseybeat-flavored number) and the soul-pop-Mersey hybrid "Let's Talk It Over" are also quite satisfying, if not typical of the approach the band usually took. Indeed, the Quiet Five's versatility sometimes worked against rather than for them, as they also delved into unimpressive updates of standards, limpid pop, and a not so hot cover of the fine Rolling Stones LP track "I Am Waiting." Still, there are more enjoyable cuts here than duds, including an uncharacteristically fuzzy stomper with lead vocals by P.J. Proby, "Didn't Give a Damn," among the unreleased items. Overall, it's a pleasantly worthwhile compilation, and recommended to British Invasion collectors trying to discover something new from the vaults, as the Quiet Five are a band about which even many serious British Invasion fans might remain unaware.