Biography by Richie Unterberger
Even more than the typical teen idol, James Darren's roots in authentic rock & roll were tenuous. Darren began recording for Colpix in the late '50s at the beginning of a screen career that saw him star in numerous films, most notably Gidget. More at home with standard MOR, show tune-like material than rock, and not much of a singer in any case, Darren was nonetheless marketed as a pop/rock performer to his predominantly young female constituency. He ran off quite a few novelty-tinged hit singles in the early '60s, of which "Goodbye Cruel World," which made number three, was the biggest and best. Top Brill Building pop songwriters -- including the Goffin-King, Mann-Weil, and Pomus-Shuman teams, as well as Bob Crewe, Gloria Shayne, and Howard Greenfield -- gave Darren material, albeit material that was well below their usual standards. He recorded quite a bit after his early-'60s heyday, reaching the Top 40 in 1967 with "All" and charting as late as 1977 with "You Take My Heart Away." During the '90s, Darren co-starred on the Star Trek spin-off Deep Space Nine as hologram crooner Vic Fontaine, reprising songs from the series on the 1999 album This One's From the Heart.
https://www.discogs.com/artist/345662-James-Darren
http://www.jamesdarren.com/
https://en.wikipedia.org/wiki/James_Darren
--------------------------------------- 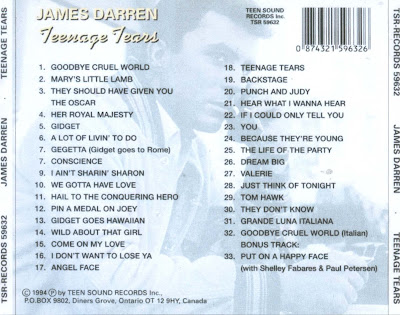