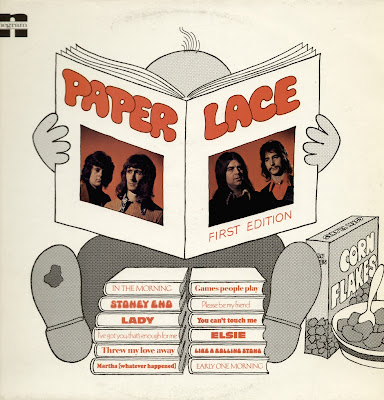 Paper Lace formed in 1969 in Nottingham, England, and made up of
Michael Vaughn, Chris Morris, Carlo Santanna,
Cliff Fish, and Phillip Wright,
Paper Lace was one of hundreds of pop bands in England looking for
the big time while slogging their way through small club gigs and
brief television appearances. Their big break came in 1974 when their
version of the tear-jerking bubblegum tune "Billy, Don't Be a Hero"
won top honors on Opportunity Knocks, a nationwide talent-show on
ITV. They rode that song all the way to the top of the U.K. charts but
were aced out of any sales in the U.S. by Bo Donaldson & the
Haywoods' transcendent version. Their next single,"The Night
Chicago Died," did manage to hit the number one slot on the U.S.
charts (number three in the U.K.) and then that was it. The group
released two albums, Paper Lace and Other Bits of Material in 1974
and First Editon in 1975, and did a quick fade from the public eye. In
1978 they surfaced briefly with a singalong version of "We've Got the
Whole World in Our Hands" with their local football team,
Nottingham Forest FC, and the disappeared forever. 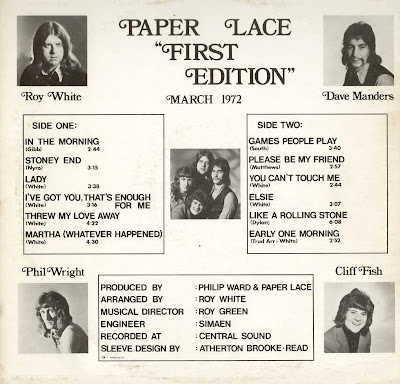