Chad & Jeremy - Sing For You ( A Golden Classics Edition) 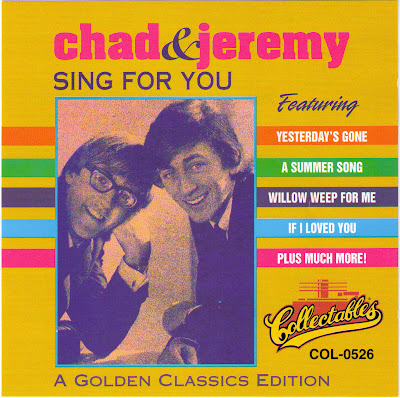 Discussions of the "quiet is the new loud" aesthetic of bands like Belle & Sebastian and Kings of Convenience typically cite primal influences like Nick Drake, Donovan, and the Velvet Underground, but rarely if ever mentioned is a duo that predated them all -- listening to Chad & Jeremy many decades on, it now seems almost as if they pioneered an entire genre, their string-sweetened, pastoral, and hopelessly twee acoustic pop anticipating so much of the sound in vogue at the turn of the century to follow. Collectables' Yesterday's Gone compiles 18 tracks from Chad & Jeremy's chart heyday of 1963-1966, although it suffers by forgoing material from the twosome's subsequent LPs, Distant Shores and The Ark. Leading off with the gorgeously wistful "A Summer Song," the disc weaves together their biggest hits and also features a few unlikely covers, including the traditional favorite "Dirty Old Town" and a suitably autumnal if otherwise baffling rendition of the Sinatra chestnut "A Very Good Year." A solid introduction, with fidelity a notch or two higher than the standard Collectables release. 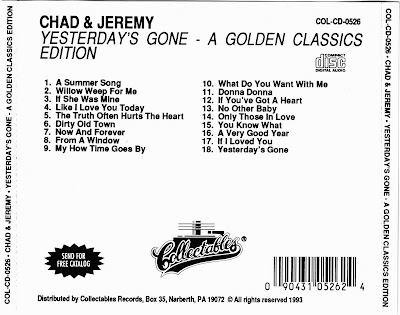