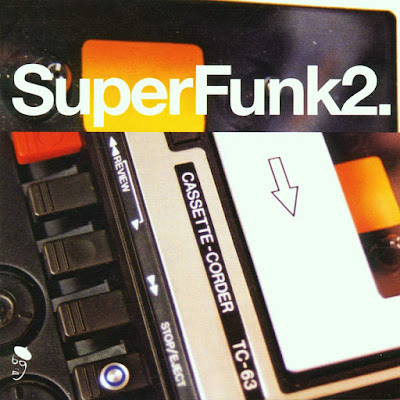 1. BRAND NEW GIRL - Billy Garner
2. JELLY ROLL - Granby Street Development
3. DO IT, DO IT - Jackie Harris and the Exciters
4. PUT IT WHERE YOU WANT IT - Pee Wee Crayton
5. WHAT YOU SEE IS WHAT YOU'RE GONNA GET - Brenda George
6. THE HOUSE THAT JACK BUILT - Thelma Jones
7. SOUL STROKES - Sidney Pinchback & the Schiller Street Gang
8. JAWS - Johnny Otis
9. PROMISED LAND - Freddie Wilson
10. YOU'RE WASTING MY TIME PART 1 - Billy Garner
11. MONKEY IN A SACK - Lil' Buck & the Top Cats
12. PASS IT ON (PT 2) - Pieces Of Peace
13. PUT YOUR LEGS UP HIGH - Robert Lowe
14. I NEED MONEY - Ruth Davis
15. IGNANT - Cornell Dupree
16. COMIN' AT YA BABY - Johnny Otis
17. WARM THE POT ('TIL IT'S GOOD AND HOT) - Willard Burton & the Pacifiers
18. MR BIG H - Joe Houston
19. FUNKY BONGO - Preston Epps
20. DIRTY OLD MAN - Irene Reid
" So, all of a sudden there is a funk scene going on that is worshipping the rare. Good on you I say, but just hold on and think about it. What is rare? To the average person in the street anything that can't be bought or at the very least ordered is rare.
Given how many rarity compilations in all genres aren't as musically exciting as they are rare, it's a nice surprise to find much excellence on this anthology, which can be heartily dug by most rock listeners, not just funk devotees. If nothing else, it's a testament to just how wide and serious James Brown's influence was during this period.
It's a very cool collection that should be at the top of the list for those who've exhausted the major funk icons and are looking for undiscovered nuggets.
As we speak, there's no need to worry about getting your hands on funk rarities. We'll do the digging, and you guys just keep on funkin'." 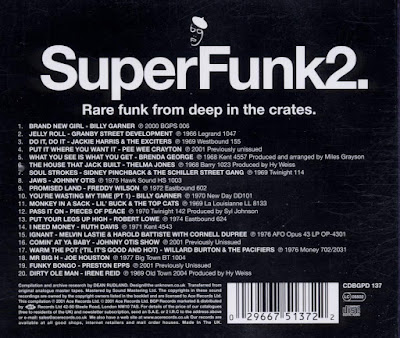