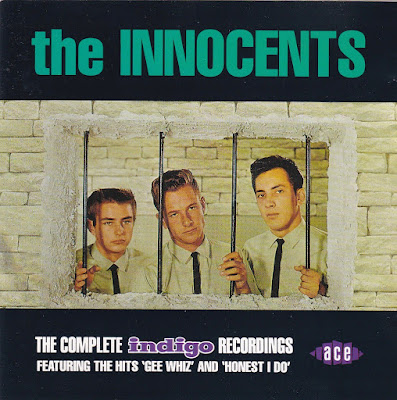 The Innocents — James West (lead), Al Candelaria (bass), and Darron Stankey (tenor/guitarist) — were a smooth harmonizing West Coast pop group from San Fernando Valley CA, whose most successful record was accompanying Kathy Young as Kathy Young & the Innocents on "A Thousand Smiles" (1960 Indigo Records, number three pop/number six R&B). Kathy Young was the ripe old age of 15 at the time. The trio were friends and members of a local car club name "The Innocents." The artists met at Wink Martindale's local television dance show, where the Innocents were lip-syncing their current single; Indigo producer Jim Lee suggested they record together after talking to Young and her mom at the taping. The Revileers, a black New York doo wop group, recorded the original "A Thousand Eyes" six years earlier. That connection caused many to mislabel the Innocents as a doo wop group; nothing could be further from the truth. 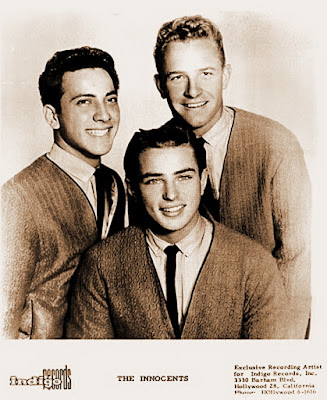 Solo, the Innocents cut their first single in 1959 as the Echos (West and Stankey) on Andrex Records; West was brought along to sing he high harmony parts. With the addition of West, the Echos became the Innocents (after the car club) after first rejecting "the Hubcaps". They then inked a deal with Indigo for their first hit "Honest I Do" (number 28 pop) in 1960. That same year, Trans World Records dumped a previously cut track by them, "Tick Tock," on the streets. Indigo answered with their smash hit with Kathy Young. They rose up the charts again in 1961 with "Gee Whiz" (number 28 pop/ number 11 R&B), and had an LP release Innocently Yours in 1961; its cover, depicting them peering through prison bars, was voted one the 1000 best album covers of all time. Indigo followed with "Kathy" after Kathy Young but it floundered, and seven singles later they hit an impenetrable wall. The non-sellers include two Reprise singles, a Decca 45, and one Warner Brothers' single. While three other singles charted, they trolled the bottom rungs of the charts. With Kathy Young they scored two more modest hits: "Happy Birthday Blues" and "Magic Is the Night" (both released in 1961) but six subsequent singles stiffed. 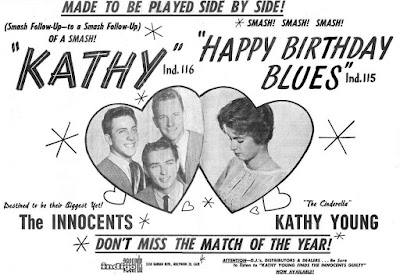 Not only did the Innocents back Kathy Young, they reportedly performed on half the recordings Indigo released. They disbanded in 1964 but their short run was exciting and fulfilling. They appeared on all the top teen shows, and shared stages with hot pop acts like Jan & Dean, Chubby Checker, and others. Starfire Records released Our Best to You in 1981; the album features the Innocents on one side and Kathy Young on the other. That same year James West had a solo album on Atlantic Records, which preceded their reuniting in 1984 to cut four spanking new tracks; but the timing was bad and they went nowhere. West continued in the music, doing everything from surf music to harmonies to rock & roll on many sessions. Al Candelaria worked as a session guitarist. All the members are all alive and doing well and like many acts from the '60s, they re-grouped in the '90s for oldie shows, appearing at venues with Kathy Young, the Penguins, Rosie & the Originals, and many others. Ace released the Innocents Complete Indigo Recordings in 1992 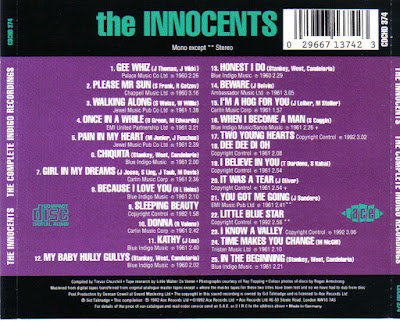