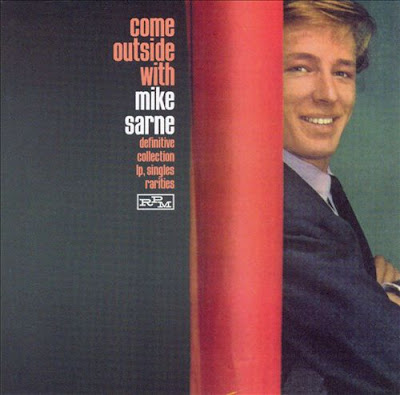 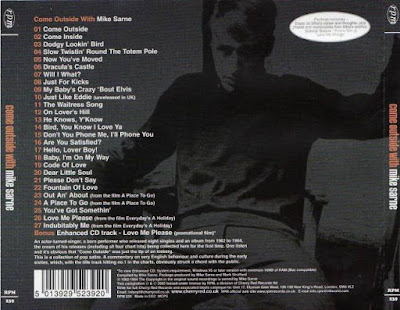 Michael Sarne (born 6 August 1940) is a British actor, writer, producer and director, who also had a brief career as pop singer Mike Sarne. He is of Czechoslovakian descent.

Sarne was born Michael Scheuer at St Mary's Hospital, Paddington, London. Active in the 1960s as singer, he is best known for his 1962 UK novelty chart topper, "Come Outside" (produced by Charles Blackwell), which featured vocal interjections by Wendy Richard. He had three more releases which made the UK Singles chart: "Will I What?", in 1962, which featured Billie Davis; "Just for Kicks", in 1963; and "Code of Love", also in 1963.
In the mid-1960s Sarne introduced the ITV children's quiz series Junior Criss Cross Quiz.

As an actor, he has appeared on television, in British series including The Avengers, Man in a Suitcase, Jonathan Creek and The Bill. Sarne also appeared in an episode of Minder as Billy Beesley, an amateur safe blower. His film credits include a starring role in the 1963 film A Place to Go with Rita Tushingham, directed by Basil Dearden, and he also appeared in Invasion Quartet (1961), Every Day's a Holiday (1965), Two Weeks in September (1967), Moonlighting (1982) and Success Is the Best Revenge (1984) for Polish director Jerzy Skolimowski and the Hercule Poirot film Appointment with Death (1988). He also played an SS captain in the TV miniseries War and Remembrance (1988). He later appeared in The Fourth Angel (2001), as Valery in the crime thriller Eastern Promises (2007), as a stage manager in Telstar: The Joe Meek Story (2008), and in 2011 he was the voice of Karla in the spy film Tinker Tailor Soldier Spy. In 2012, he played Father Mabeuf in the film of Les Misérables. In 2013, he was 'Publican No 5' in the British comedy film, The World's End.

Films he has directed include Joanna (1968) and Myra Breckinridge (1970), an adaptation of Gore Vidal's book of the same name, starring Raquel Welch, Rex Reed, Mae West, with Farrah Fawcett and Tom Selleck in roles early in their careers. Joanna broke even at the box office, but Myra Breckinridge was a major box-office flop and drew such critical hostility, his career never recovered. A more recent film is The Punk and the Princess (1994), an adaptation of Gideon Sams' young adult novel The Punk, about the romance between a teenage punk rocker and a Sloane Ranger girl. He also directed a documentary about the Glastonbury Music Festival in 1995.

He attended the School of Slavonic and East European Studies earning a BA. Sarne had a relationship with Brigitte Bardot only a few days after her honeymoon with Gunter Sachs. He has 5 children: Claudia and William from his 1969–1978 marriage to Tanya Sarne, founder of the designer label Ghost; and Emma, Abigail and Sarah with second wife Anne Musso, whom he married in 2004 in Chelsea, London.