Mike Berry - Sounds of The Sixties 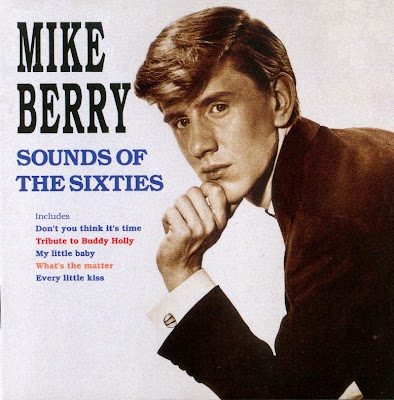 Mike Berry -- not to be confused with his contemporary Dave Berry -- was a pop/rock singer who gained his initial fame as part of the stable of artists produced by the legendary Joe Meek. His best known record, "Tribute to Buddy Holly" is one of the most fondly remembered singles of the pre-Beatles era in England, as well as a touching memorial to its subject, with a bravura performance by Berry. Born Michael Bourne in Northampton, England, in 1942, he was raised in London and originally started singing as a member of his church choir during the early '50s. When the skiffle boom came along in the middle of the decade, he took up playing the washboard and joined a local group christened "the Rebels". He eventually moved on to doing straight American-style rock & roll and, at the start of the '60s, was singing in a dance band called Kenny Lord & the Statesmen -- their repertory included the music of Buddy Holly and Gene Vincent, among others, whose "Peggy Sue Got Married" and "Be-Bop-A-Lula," respectively, were on a four-song demo cut by the group.
That record found its way into the hands of Joe Meek, who was struck by how closely the singer matched the tone and nuances of Holly's singing. He made contact with the group, and tried to keep singer and band together, but the other members soon fell by the wayside. In their stead, Meek recruited a London-based band called the Stormers, whose ranks included Chas Hodges on bass, Bobby Graham on the drums, and Billy Kuy and Reg Hawkins on lead and rhythm guitar, respectively -- Michael Bourne/Kenny Lord became Mike Berry and the Stormers were given the name the Outlaws, and they set about performing and recording as Mike Berry & the Outlaws, cutting a version of a song that Meek chose, called "Set Me Free." The song was duly recorded and Meek set about trying to get it released, only to have it rejected by Decca Records A&R chief Dick Rowe -- who, nonetheless, liked the singer.
Rowe prevailed upon Meek to get Berry and his band to deliver a cover version of the new Shirelles single "Will You Love Me Tomorrow." Unfortunately, Decca issued that record at the start of 1961, just as the American original finally got released in England, and Berry's version was completely swamped. It wasn't until the summer of 1961 that Berry finally had a chance to show what he could really do with a song, when he was given "Tribute to Buddy Holly," authored by Geoff Goddard. With the Outlaws emulating the sound of Holly's band the Crickets, and Berry sounding so much like Buddy Holly that the whole listening experience was downright eerie, the record was a huge hit right out of the box, and with good reason -- it was a superb record, and it had a more-than-willing public; the Texas-born Holly was revered in England far more than he was in his own country, and British teens loved the single. It made the Top 20, and sold steadily for months. It never did reach its full potential, however, owing to the interference of the BBC, which refused to play the song, citing its morbid subject matter (there were a lot of "death" songs on the radio at the time).

Berry would seem to have been on his way, but such was not the case. His next two singles never charted, and a year later it almost seemed as though he was back at square one. Even more to the point, as 1962 wore into 1963, a new sound started emerged in England, coming out of Liverpool. After two missed, Berry charted a second hit, "Don't You Think It's Time," in late 1962, which made the British Top Ten at what later proved to the tail-end of the pre-Beatles era in British pop music. He followed this up with another Top 40 appearance in the spring of 1963, with the song "My Little Baby." During this same period, he was booked onto a package tour with the Beatles, and proved he could share a bill with the prime practitioners of the new Merseybeat sound. He also became one of the earliest performers to be managed by Robert Stigwood, who was working for Meek, and took over his bookings and, for a time, his recording sessions. This proved to be fortuitous, as Meek always had too much on his tray, and never had enough good songs to supply to the artists he was managing, or enough time to devote to each of their recordings and careers. But the changes in music, and the growing dominance of groups over solo singers ultimately overpowered Stigwood's best efforts on his behalf, or the varied sides that Berry tried to put before the British public from 1963 onward. By that time, the Outlaws -- whose ranks had come to include a promising young guitarist named Ritchie Blackmore -- had moved on to other activities, the members folded into other Meek-managed bands (including the Tornados) or doing session work. By the middle of the decade, Berry was consigned to ever-smaller gigs and recordings. He turned to acting in the '70s, though he never entirely gave up music, and by the end of the decade had found something of a niche as a nostalgia/oldies performer, still doing basic rock & roll. He returned to the U.K. Top Ten in 1980 with the single "The Sunshine of Your Smile," and got a second crack at the charts with "If I Could Only Make You Care" and "Memories." His renewed commercial success even led Berry to re-record "Tribute to Buddy Holly" in a more personalized rendition two decades after the fact. Since the '80s, he has divided his time between acting (including the series Are You Being Served in its last four seasons) and music. In 2006, he released About Time Too, an album cut with the surviving members of the Crickets in Nashville. 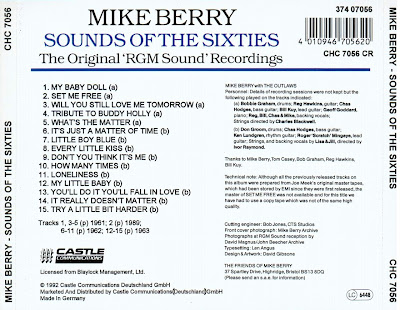