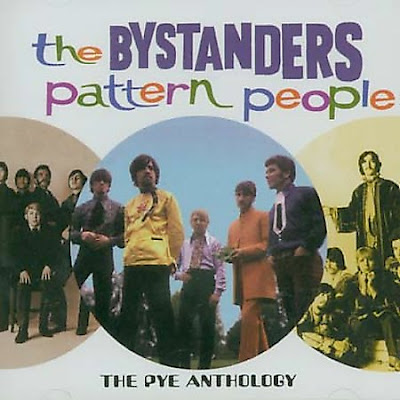 One of the few Welsh bands to release records on a fairly regular basis in the mid to late '60s, the Bystanders are chiefly notable not for their own derivative music, but because they evolved into the Welsh progressive rock group Man. As the Bystanders, they managed to release eight singles in the U.K. between 1965 and 1968, competently plugging into Merseybeat, blue-eyed soul, and harmony pop trends without developing any clear vision of their own or landing any superb material. Slight psychedelic hues colored some of their final tracks, which pointed the way into more original and progressive directions that the group would embrace when it mutated into Man.


The Bystanders formed long before the dawn of Man in the South Wales town of Merthyr Tydfil in 1962. They made one Merseybeat-Four Seasons hybrid single for the independent Pylot label (in fact, it was the only record the company ever released) in 1965 before picking up a new manager, George Cooper, who had handled major British pre-Beatles rock singers Joe Brown and Marty Wilde. In 1966 they got a contract with Pye, who put out seven singles by the group over the next couple of years without breaking them as a significant seller.
Perhaps, surprisingly given their later excursions in Man, the Bystanders were very much a pop group, giving the impression of sailing whichever way the wind was blowing, and writing little of their own material. Their early singles showed the pronounced influence of American harmony groups with high vocal lines, such as the Four Seasons, Beach Boys, and lesser known pop acts like the Happenings. In 1967 and 1968 they moved into somewhat more sophisticated, but still poppy, material that recalled the fluff of late '60s California sunshine pop. The group, which had not recorded any of their own compositions prior to 1968 (except on their debut single), finally did write their two final B-sides, which staked out a psychedelic pop direction. With the departure of singer Vic Oakley and the addition of guitarists Deke Leonard and Martin Ace (both from the Dream) in the late '60s, the Bystanders changed their name to Man and embarked on a different course. 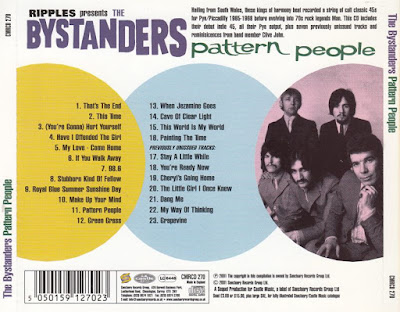 This 23-song compilation shows a group who had the pop sensibilities and range of the Tremeloes, and who could do credible soul covers and more than decent psychedelia, but somehow never developed a distinctive sound of their own. The result is an almost dizzying array of styles, represented by eight singles that were perfectly good records but which seldom sounded like each other. The Bystanders' early sides, from 1965, were heavily Beatles-influenced, their debut recalling the Liverpool quartet's early-1963 recordings, but also displaying smooth pop hooks reminiscent of Herman's Hermits on their better singles. By the time of "Have I Offended the Girl" in 1966, they start to sound more like the early Who vocally, but the other side of the same single is the dramatic pop ballad "My Love -- Come Home," and their next single, "If You Walk Away," is somewhere midway between Unit 4+2 and Tom Jones, while their cover of "98.6" is cheerfully upbeat in a way that recalls Herman's Hermits at their most embarrassingly upbeat. And then they come up with a decent cover of "Stubborn Kind of Fellow" in 1967. Beyond that point, the group turned toward a gentle brand of psychedelic pop, represented by "Royal Blue Summer Sunshine Day," "Pattern People" (where they sound a bit like the Association), and the poppish, upbeat "Green Grass," moving into ethereal psychedelia on the sitar-laden "Cave of Clear Light." And then, just as their history as the Bystanders was coming to an end, they plunge into the Bee Gees-inspired sides "This World Is My World" and "Painting the Time" (think the trio's late-psychedelic era). This CD is filled with moments like that, little pop/rock jewels that are widely scattered and don't exactly spell out a full story of anybody, but are pretty satisfying on their own terms. The disc also includes a brace of unreleased tracks, among them a rocking cover of "Cheryl's Going Home" and interesting renditions of "The Little Girl I Once Knew" (where the harmonies intermingle well with the lean instrumental sound) and "Dang Me," plus the two prizes of the 23 songs here, "My Way of Thinking," a hard-rocking piece of U.K.-style garage rock, and "Grapevine," a blue-eyed soul classic that shows what this group was truly capable of in the way of original songs, when they aimed that high.