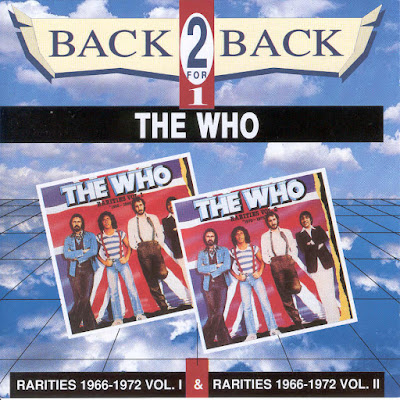 The Who's Rarities 1966-1972 is a double-album, single-disc British compilation of non-album singles, B-sides, covers, and obscure material. It came out just prior to the box set Thirty Years of Maximum R&B and the re-release of all the Who's albums, which have included some of the tracks on this release as bonuses. Although there is some overlap, Rarities contains many songs and original versions that are still unaccounted for. Interestingly, this is the only Who release not dominated by Pete Townshend compositions; more than half of the selections are either penned by other Who members or outside writers. This is the only official Who release that contains their covers of the Rolling Stones' "The Last Time" and "Under My Thumb" (released in the '60s as a protest against the unfair drug bust and short-lived jailing of Mick Jagger and Keith Richards), plus top-notch early-'70s studio material: "Don't Know Myself," Entwistle's "Heaven and Hell," and "Water." Some of the more interesting and uncommon material is an off the wall Keith Moon composition ("Waspman"), a strong Roger Daltrey original ("Here for More"), and an aggressive live take of "Baby Don't You Do It." Also included are the more well-known and popular Who standards "Join Together," "Relay," and "Let's See Action." Although Rarities 1966-1972 was intended for completists, it certainly holds up as an attractive exhibit of overlooked Who tracks from over the years. (Note: MCA Records has still not re-released the Odds & Sods album on CD, which may contain songs included on Rarities 1966-1972 when it finally appears.) 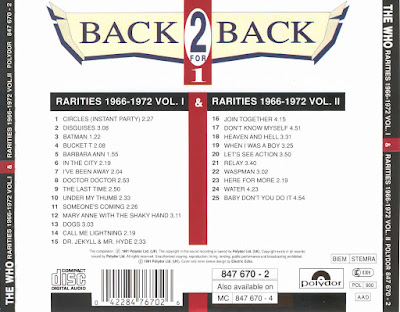