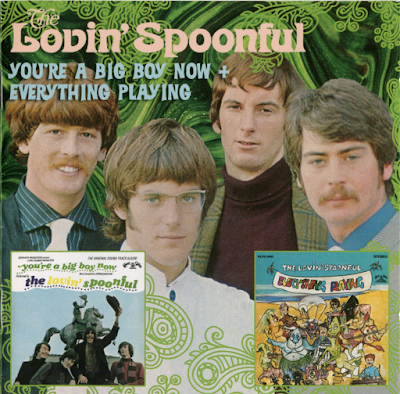 " "You're a Big Boy Now" opens this soundtrack on a jolly note with hilarious lyrics. "Well I don't know how but you're a big boy now, go on and take a bow, 'cuz you're a big boy now!" Good verse melody ("You know the girls are taking notice of you, they say your hair is getting curly too, so shave today you'll shave tomorrow as well, you're run by you and not a classroom bell!") The melody is really awesome I gotta admit. "Lonely (Amy's Theme)" opens in a way that reminds me of a Rascals song ("It's a Beautiful Morning I think- might be wrong) with the lazy day simple harmonica and pleasant "Let's fish off the dock" atmosphere. I think I've heard this before many years ago, unless I'm confusing it with a theme to some daytime drama. Either way nice harmonica melody leading into an orchestra later.

"Wash Her Away (From the Discotheque)" is party hard rock with a touch of blues. Really forgettable vocal melody but the guitar part in the middle is pretty good though. Hey wait, the word "discotheque". It means disco but... this is the late 60's? And disco didn't come out until later... or so I thought. Unless it's the other definition of discotheque (a sleeveless dress). I think I'm finding out where the term disco came from right now! Maybe not from the Lovin' Spoonful but from the mid 60's. "Kite Chase" is amazing though- a sax melody with jazzy drums. The atmosphere is uplifting and adventurous.

"Try and Be Happy" is a nice jazzy walts of some kind, "Peep Show Percussion" is a nice drum roll with saxophone and "Girl, Beautiful Girl (Barbara's Theme)" is a more familiar Lovin' Spoonful type of song. The opening lines are really good. "Well you never can tell but you're looking so well, that I gotta stop and say "How do you do?", I know it's a long shot but judging what she's got, I'm hoping that my judgement's true". But the chorus... "Girl beautiful girl... can I look at your insides? Girl wrapped up in fur, I'm just mad for your outsides!" Er... LOL! No comment necessary!

"Darling Be Home Soon" was a hit I think, because it sure sounds familiar. Nice opening vocal melody and lyrics ("Come and talk of all the things we did today, here and laugh about our funny little ways, while we have a few minute sto breathe, then I know that it's time you must leave!") and the way John Sebastian carries out certain lines. "A quarter of my life is almost passed, I think I've come to see myself at last, and I see that the time spent confused, was the time that I spent without you, and I feel myself in bloom" is a really sad line. Yeah unquestionably best song on the album! I know another band borrowed this melody though. I'm thinking early 70's.

"Dixieland Big Boy" is jazzy marching band music. I don't care for this song. Sounds like the credits music to a sitcom (and it probably was!) "Letter to Barbara" is overbearing with the orchestration but it's alright since it's only a few seconds and progresses into a romantic James Bond jingle. What the? "Barbara's Theme (From the Discotheque)" is just "Girl, Beautiful Girl" but shortened. How cheap. "Miss Thing's Thang" (I think we all know what the "thang" is- character!) is a really good tune. Sneaky quiet saxophone and cello that's perfect music for a mouse trying to sneak a piece of cheese off the floor and into the wall!

"March" is all about those marching drums blurting out. Oh but the melody is the one from "Darling Be Home Soon" so it's pretty awesome. A little much with the brass though! A minute overlong. "The Finale" is "You're a Big Boy Now" repeated again with slight differences and not as outstanding vocally. The orchestrated dance part in the middle is good..." ~ Bryan 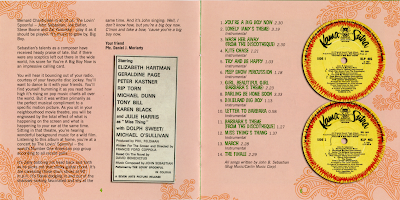 The Lovin' Spoonful's fourth album, Everything Playing, was made under trying circumstances. Musically, the Sgt. Pepper/Summer of Love era had made the Spoonful's good-time, jugband approach obsolete, and chief songwriter John Sebastian had to try to keep up. Personally, the group had suffered the disaster of a drug bust that resulted in the departure of lead guitarist Zal Yanovsky, who was replaced in August 1967 by Jerry Yester. Despite these problems, Sebastian was able to turn out a good album paced by its three Top 40 hits, "Six O'Clock," "She Is Still a Mystery," and the deceptively comic "Money," in which he castigated financial aspects of the music industry. Also excellent were "Boredom" and "Younger Generation," which Sebastian later would sing at Woodstock. When Sebastian wasn't at the mic, the singing could be mediocre, and the group was often all over the map in its attempt at musical sophistication, but the record was saved by Sebastian's writing and singing. Then he too jumped ship. 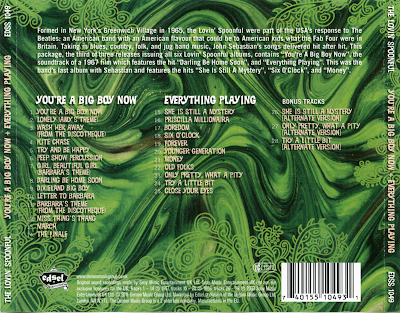