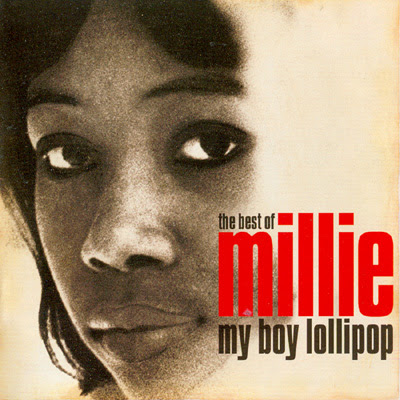 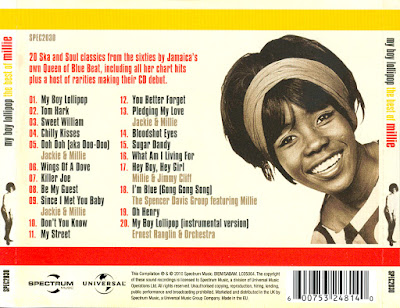 Millicent Dolly May Small CD (6 October 1947 – 5 May 2020) was a Jamaican singer and songwriter, best known for her 1964 recording of "My Boy Lollipop", which reached number two in both the UK Singles Chart and the US Billboard Hot 100. On her UK records, she was usually credited mononymously as Millie.
Small was born in Clarendon, Jamaica, the daughter of a sugar plantation overseer. She was one of seven brothers and five sisters. Like many Jamaican singers of the era, her career began by winning the Vere Johns Opportunity Hour talent contest, which she won at the age of twelve. Wishing to pursue a career as a singer she moved to live with relatives in Love Lane in Kingston. In her teens, she recorded a duet with Owen Gray ("Sugar Plum") in 1962 and later recorded with Roy Panton for Coxsone Dodd's Studio One record label as 'Roy and Millie'. They had a local hit with "We'll Meet".

Her local success brought her to the attention of Chris Blackwell who became her manager and legal guardian. In late 1963 he took her to Forest Hill, London, where she was given intensive training in dancing and diction. There she made her fourth recording, an Ernest Ranglin rearrangement of "My Boy Lollipop", a song originally released in the US by teenager Barbie Gaye in late 1956. Released in March 1964, Small's version was a massive hit, reaching number two in the UK Singles Chart, in the US Billboard Hot 100, and in Canada. It also topped the chart in Australia. Initially it sold over 600,000 copies in the United Kingdom. Including singles sales, album usage and compilation inclusions, the song has since sold more than seven million copies worldwide. Her later recordings, "Sweet William" and "Bloodshot Eyes", also charted in the UK, at numbers 30 and 48 respectively, and "Sweet William" also peaked at number 40 in the US, her only other American chart single, and number 22 in Canada. "My Boy Lollipop" re-charted in the UK in 1987 at no. 46.

"My Boy Lollipop" was doubly significant in British pop history. It was the first major hit for Island Records (although it was actually released on the Fontana label because Chris Blackwell, Island's owner, did not want to overextend its then-meagre resources; in the US, the record appeared on the Smash Records subsidiary of Mercury Records), and Small was the first artist to have a hit that was recorded in the bluebeat style (she was billed as "The Blue Beat Girl" on the single's label in the US). This was a music genre that had recently emerged from Jamaica, and was a direct ancestor of reggae.

She appeared on the 1964 Beatles TV special Around the Beatles. On 28 December 1964 she also appeared in ITV's Play of the Week episode "The Rise and Fall of Nellie Brown", playing the role of Selina Brown; The play features a number of songs composed by Dolores Claman and performed by Small.

On 6 March 1965, Small appeared on the Australian television programme Bandstand. This was as part of a concert at the Sidney Myer Music Bowl in Kings Domain, Melbourne, part of the Moomba Festival. She performed "My Boy Lollipop", "What Am I Living For", and "See You Later, Alligator". The emergence of reggae in the United Kingdom in 1969 prompted a return to recording for Small, with the single "My Love and I". Small continued to tour and perform up to the early 1970s.

In 1987, during a rare interview with Thames News, it was revealed that Small was destitute and had taken to living in a youth hostel with her toddler daughter.

On 6 August 2011, the 49th anniversary of Jamaica's independence, the Governor-General created Small a Commander in the Order of Distinction, for her contribution to the Jamaican music industry. The award was accepted on her behalf by former Prime Minister Edward Seaga.

In July 2012, she stated that she had been recording again and planned to perform in Jamaica for the first time in over 40 years.

After nearly forty years away from the limelight and refusing most interview requests, Small granted U.S. journalist Tom Graves the first ever in-depth interview in the August 2016, edition of Goldmine. Previous interviews were typically short and based on press releases. In the interview she discusses fully her early career and the full impact of "My Boy Lollipop". She also insisted, against the denials of Rod Stewart, that it was Stewart who played harmonica on "My Boy Lollipop". She said she remembered the sessions well and recalls Stewart being asked to play. Small also said in 2016 that she had not received any royalties for the single.
She had a brief relationship with Peter Asher of the 1960s duo Peter & Gordon.[ In her August 2016 interview with U.S. journalist Tom Graves she said the relationship had been platonic.

She lived in Singapore from 1971 to 1973 before returning to the United Kingdom where she lived for the remainder of her life. She had a daughter, Jaelee, born in 1984, who studied art and the music industry and is a singer-songwriter.

Death
Millie Small died on 5 May 2020 in England, reportedly from a stroke. News of her death was first announced to the Jamaica Observer by Chris Blackwell, who last met Small some 12 years before her death. He remembered her as "a sweet person" with a "great sense of humour". Blackwell also credited her for popularising ska on an international level "because it was her first hit record". 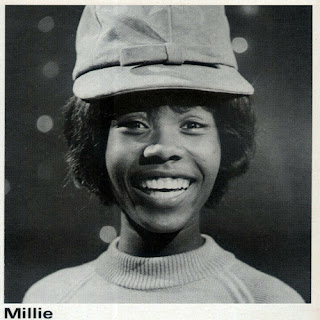