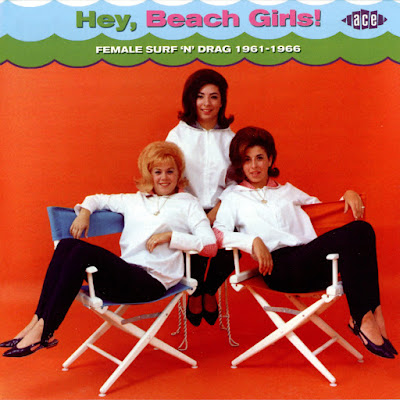 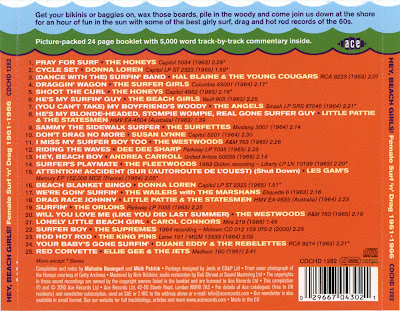 It wasn’t just guys singing about surfboards and hot rods during the surf and drag boom in the early '60s; the girls were doing it, too, as this delightful 25-track compilation from Ace Records shows. Although nothing here was really ever more than a regional hit, these female singers and groups add a refreshing spin to a genre that puts a premium on motion and speed and expands love to include the sun, endless waves, and high-performance car engines. It adds up to a wonderful batch of rarities including Brian Wilson's production of “Pray for Surf” by the Honeys (who included Marilyn Rovell, Wilson's soon-to-be wife), “(Dance with The) Surfin’ Band” by Hal Blaine & the Young Cougars (drum legend Hal Blaine with the Blossoms on vocals), “Will You Love Me (Like You Did Last Summer)” by the Westwoods (Gracia Nitzsche singing an arrangement composed by her husband, Jack Nitzsche), a stomping “Drag Race Johnny” by Australia’s endearing Little Pattie, and the first ever effort by the great songwriting team of Ellie Greenwich and Jeff Barry, “Red Corvette,” which was billed to Ellie Gee & the Jets. Each of these sides is at least historically interesting, and if some, like a rare surf song from Motown Records, “Surfer Boy” by the Supremes, are conceptually improbable, each conjures up the sound and feel of an endless summer where it isn’t just the guys in motion.